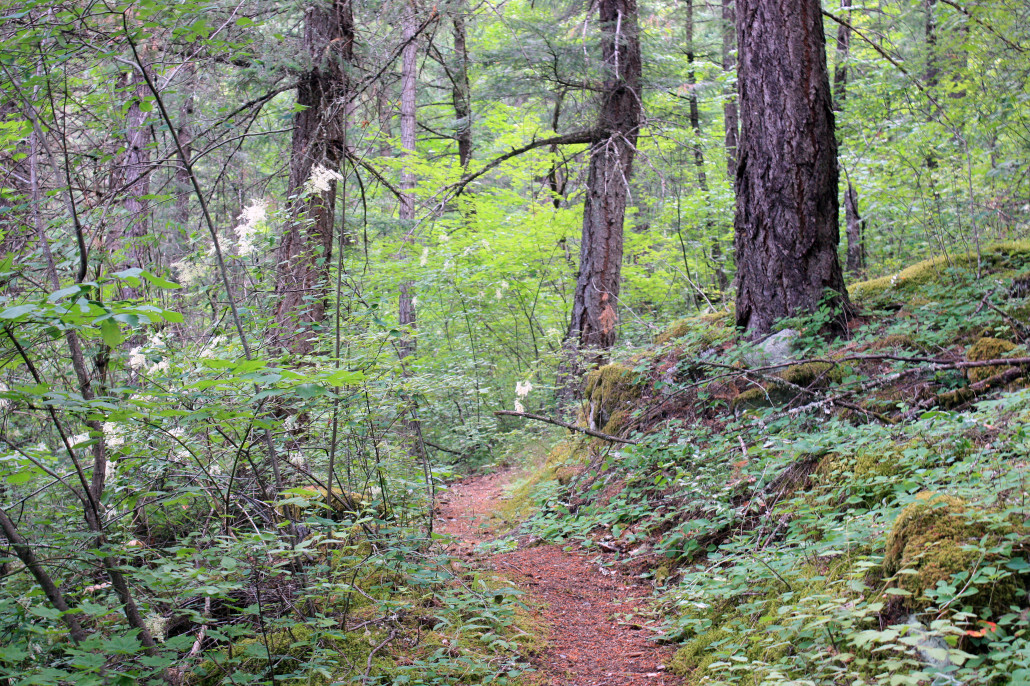 This is a good example of a brigade trail as built by the axe-men of the HBC road crews in the early 1850’s. They were generally ten feet wide and zigzagged up and down the steepest of the hills.

I sometimes work with a researcher who does not listen, and it becomes very difficult to have to explain, once again, that the information he/she is presenting me is not the information I am looking for. In this case, it was the brigade trails in the area around Horse and Green Lakes. I know from Alexander Caulfield Anderson’s maps, and from the research I have done, that there are at least three brigade trails in this area. Here are the ones I know about:

There is the old brigade trail used between 1826 and 1842, that led east over the “mountain” to the modern-day town of Little Fort. The history of this trail is told by James Gibson, in his book The Lifeline of the Oregon Country: The Fraser-Columbia Brigade System, 1811-1847, [UBC Press, 1997]. I understand that locals are now exploring that old trail, part of which runs along the north shore of “Drowned Horse” Lake, according to Sam Black’s map of the Thompson River district [CM/B2079, BCA. A copy of this map is also in the Vernon Archives, I believe, with a slightly different number].

In 1843 the New Caledonia men came out by a new trail that led past Green and Loon Lakes to Kamloops. Its route, as known in 1858 or so, is described in this article online: http://kamloopstrails.net/hudson-bay-company-brigade-trail/  You will also find more information in my earlier post on this subject, here: http://nancymargueriteanderson.com/horse-lake/

However, the trail as shown in 1858 is not the same trail they rode over in 1843, and I will tell you why that is true. Its a good story, actually, but it should change our idea of where the 1858 brigade trail actually ran in certain parts of the country. I don’t think the Kamloops men did a lot of work on the trails, but as many of the journals are missing, they may have done more than I thought. James Murray Yale, at Fort Langley, was mostly responsible for clearing the new trails that existed close to his posts of Forts Yale and Hope. His crews must have worked hard, as James Douglas reported in summer 1850:

They [the brigades] met with no molestation whatever from the natives, and in general report favourably of the road. It has been much improved and many dangerous points avoided this season, and we have made arrangements to employ a gentleman and ten men in effecting further improvements in the course of next spring..

But this did not help with the roads north of Kamloops, which also required work. In 1851, Peter Ogden, son of Peter Skene Ogden, was put in charge of a road crew and assigned ten good axe-men to work under him. It seems these axe-men were the new men who had crossed into New Caledonia to Fort St. James with the incoming Columbia Express, and after the work was completed they would be distributed throughout the district. In March, Ogden took charge of the Fort St. James brigades on their way downriver to Fort Alexandria:

Saturday 3rd [March] At 9am dispatched the Brigade for Alexandria under the command of Mr. Peter Ogden [who] on reaching there is to deliver the charge to Mr. [Donald] McLean who is [appointed] to conduct it to Langley.

Ogden arrived at Fort Alexandria on May 8th:

About 1 o’clock PM Mr. Peter Ogden arrived with a Brigade of four Boats… Chief Trader Donald Manson is incapable (from sickness) to go out with the Brigade and I (D. McLean) am deputed to take charge of it from this to Langley. Mr. Ogden is to proceed on in advance in order to work at the Road…

Sunday 11th. Mr. Ogden with a party of 10 picked axemen took his departure for the purpose of arranging the Route.

The Kamloops post journals tell us when Peter Ogden arrived at Kamloops, and Anderson’s 1867 map tells us where “Peter Ogden’s Encampment” stood. Ogden had left Fort Alexandria on May 11, and on May 25 (fourteen days later), he rode into the Kamloops post. It took the brigades nine days to cover that distance, but men on horseback took only four. For example: When Anderson traveled from Kamloops to Fort Alexandria in 1846 he took four days (June 10-June 13). Ogden and his hard-working axe-men must have spent ten days in cutting the trail from Bridge Creek to the end of Green Lake in 1851:

Saturday 24th. Michel Ogden arrived, he was sent by his Brother [Peter] who is working at the river for Provisions. He left him with 10 men at the River de pont [Bridge Creek. The new trail was just south of that creek, actually]

Friday 30th. Mr. Ogden and party off on their way to Fort Hope…

It was always my theory that Peter Ogden built the new trail from Horse Lake to Green Lake in 1851, and now I am comfortable with saying it out loud. The brigades reached Kamloops in early June, and left on the 17th for Fort Hope, two weeks after Ogden had departed Kamloops for the same place. In February 1852, Donald Manson reported from Fort St. James on the improvements made in the old trail:

In consequence of the small quantity of snow which had fallen during that winter, and which this early spring soon cleared off, the Brigades of New Caledonia and Thompsons River were enabled to go across at a much earlier period than usual. That road is now much improved, Mr. P. Ogden & ten good axemen were sent by me last spring for this purpose, and I believe from what I learn regarding it, and the facility and care with which the horses brought in the Outfits, then this Gentleman has executed his task well…

In 1852, the road crew went out once more ahead of the brigades, continuing to improve the trails. In summer, James Murray Yale of Fort Langley wrote of the portion of the trail over the Tulameen Plateau:

We hear no more complaints about the new route to the Interior. [Paul] Fraser to whom the credit is due of bringing out the Brigades some twenty or thirty days earlier than was considered practicable praises it highly, and that luxuriant Man, McLean, seems to think it a matter too slight to advert upon, and in reality there appears to be but one considerable obstruction to the Waggon road on leaving the banks of Fraser’s River, called Manson’s Mountain, and that affords the pleasing prospect of a distant view of Campement de Chevruil in the land of Promise. Manson himself begins to appreciate its great advantages…

That description of Donald McLean, as given by Yale, should give a picture of the kind of man McLean was: its a wonderful image. The “land of Promise” mentioned above might have been what Douglas called earlier the “Garden of Eden,” but which in later years was called “Stuckd-a-choire,” or the “choire,” from the beautiful recess situated about half way down its eastern slope. For more information on the Garden of Eden (which may or may not be the “choire,”) see this post: http://nancymargueriteanderson.com/garden-of-eden/

Ferdinand [“Red River”] McKenzie took out the road crew in 1853. On June 15 or so he arrived at Fort Langley, and reported:

I am happy to inform you that the interior Brigades New Caledonia & Thompson’s River are on their way hither. I left them at the Guard [then at Tulameen] on the 12th inst [June] from which place I was dispatched ahead by Mr. Manson with four men to make repairs on the road. Everything so far has gone favourably with us, but Manson’s Mountain is in one state of [mess] from top to bottom & in the peak [plenty] of snow, so I expect they will experience some difficulty in crossing that piece of road. Ever since I left them it has been raining incessantly & from this I judge they have not yet started from their Encampment, & if the weather proves at all favourable to them, I give them four or five days grace at the [furthest] to be here.

In 1854, the HBC began their search for a route around Manson’s Mountain, which had washed out in the heavy rains of 1853. I have no information on whether or not the HBC sent road crews ahead of the brigades in the years that followed — but there were plenty of road crews of various sorts in the region. For example: In 1855, Douglas was happy to hear “that there is a prospect of finding a better road than the present one through Manson’s Mountain,” and he suggested that Paul Fraser open it for the brigades. The new route was by the Similkameen River valley “leading through a continuous valley direct to Fraser’s River, where there are extensive alluvial plains capable of supporting all the Brigade horses for any length of time.” This trail had been discovered by Natives, Douglas said, and he was very excited about it. In 1856, Douglas wrote to Donald Manson about the “other route via the Chilwaywook valley,” that was being rendered passable:

For all accounts agree in representing it as free from most of the defects of the other road. We did not succeed in opening it throughout its whole extent last autumn but I have written to Mr. [Donald] McLean [now in charge at Kamloops] to push forward a party as soon as possible with the view of rendering it passable for the Brigade next summer..

In July 1856, an abashed Douglas reported to the London Committee, that:

We have at present abandoned the proposed new route to the interior by the Chilwayook valley in consequence of unexpected obstacles, which the explorers of the route had overlooked, near the Chilwayook Lake, which is enclosed by precipitous rocky hills, apparently inaccessible to horses either in a direct line across their summit or by following the margin of the Lake. We are therefore now about to direct all our strength to improve the existing road by Fort Hope.

Yes, the Chilliwack River ends in a box canyon. Douglas should have remembered that, as this is the second time he had the river explored, and the second time it was rejected as a horse route. But he really had no idea of the ruggedness of the country, and wasted a lot of resources over the years. For a while they looked for a trail around Manson’s Mountain and did not find one that was any easier to travel. When Lieutenant Henry Spencer Palmer, of the Royal Engineers, traveled over the brigade trail to Fort Colvile, he climbed Manson’s Mountain. Nothing had changed, in spite of James Douglas’s many attempts to find a new road.

Anderson never rode over the new road from Green Lake to Bridge River, but he was familiar with the rest of the brigade trail. Here is the next section of Following A.C. Anderson Around British Columbia: http://nancymargueriteanderson.com/bridge-river/