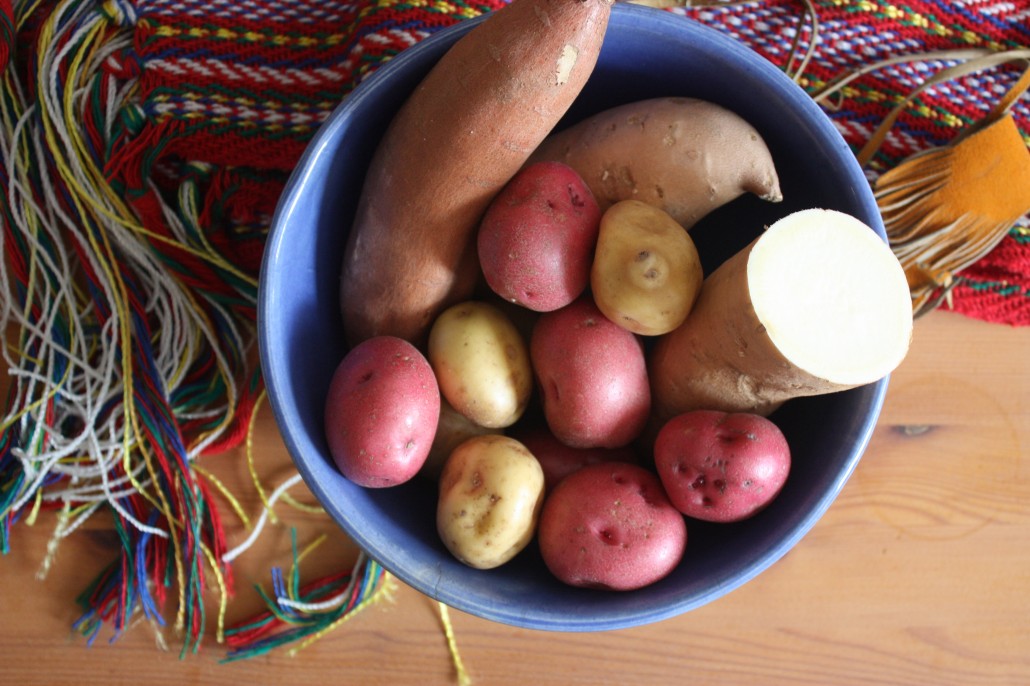 You may wonder why I am writing about a topic such as potatoes in the fur trade, but this is a subject that has caught some fur-trade-historians’ attention. Richard Mackie is writing about fur trade agriculture, and some of the Royal British Columbia Museum staff are growing Nootka and other potatoes in their backyards. There has also been a collection of potatoes brought down to Victoria by a person who had been raising them in his backyard — he said they were potatoes that were known to have been growing in the wild some time before the gold-miners reached the upper Fraser River in 1859 or so. At the same time, I met a young woman in the archives who was researching potatoes growing among the Native tribes in Pemberton Valley, that had not come from nearby Fort Langley!

Before 1858, the only people in the territory that was then called “New Caledonia” were the fur traders, and Natives. The place were the potatoes were found was no where near any of the fur trade posts in the interior. So, my immediate question was — how could the potatoes have got to that spot, which happened to be some fifty miles from old Fort Alexandria?

And as you see from my last post, I discovered that Alexander Caulfield Anderson had given a Native named “William a large pan full of potatoes with some turnip seed & carrots. The same to Columetra…” Both these men were Natives who lived at Williams Lake, perhaps, and in a village located on Chimney Creek.

But I already knew two years ago that Anderson had given some Natives potatoes to grow: in the Fort Alexandria journals I found that in April, 1846, Anderson wrote that “Eleven Indians [are] working the soil [at our] suggestion, and I have promised to supply them seed potatoes.” Descendants of these first potatoes, grown by the Natives at Fort Alexandria or on Chimney Creek, could have been transported anywhere by the Natives, and planted at, perhaps, a summer fishing village.

So then I did a little research on what kind of potatoes were grown at forts in the territory and elsewhere, and discovered that Fort Vancouver grew bush potatoes, red potatoes, early blue potatoes, Ladies Finger potato, and early ash leaf Kidney, according to Hussey, “Fort Vancouver Farm.” In a report of Mr. George Gibbs on the Indian tribes of the Territory of Washington, there was also a reference to mercer potatoes, and blue nose. These potatoes were already found among the tribes that surrounded Forts Nisqually [Tacoma] and Vancouver [Vancouver, WA] — of course, this was after the American settlers had reached Oregon Territory.

Now I am no expert in potatoes, so whatever I offer in this post is entirely unofficial! But what did I discover? In an early search I found nothing about the bush potato, but after a little thought (and research) I considered that Fort Vancouver’s bush potato might have been a sweet potato. Many sweet potato varieties grown on marigold-like vines, but there are some that grow on bushes. Sweet potatoes come from South America, they have orange colored flesh and white or orange skin, and is quite possibly what the fur traders called the bush potato.

Many of the other potatoes I was able to identify possibilities through a Heritage Potato site in England. The heritage red potatoes will probably be different from what we know as red-skinned potatoes today. Heritage red potatoes had a red flesh that would whiten as they cooked, and a red to purple colored skin.

Blue potatoes still exist and you can occasionally find them in grocery stores. They have a blue flesh and bluish-purplish skin and are quite beautiful.  The early ash-leaf potato is listed on heritage sites and is a kidney shaped potato with a light buff skin.

Brotchie potatoes are a bit of a mystery to me. They are English potatoes imported to Fort Vancouver (and Fort Victoria) by sea Captain William Brotchie (of Brotchie Ledge fame) — hence their name. All I know is that they were an early kidney variety.

Finally we have the Ladies’ Finger potato, grown at Fort Vancouver and also at Fort Nisqually. In fact, if you live somewhere in Pierce country where the old Fort Nisqually farms once stood, it is possible that you will get volunteer potatoes that are descendants of the potatoes grown on the Fort Nisqually farms. [Wild asparagus has also been found].

From BackyardGardener.com, here is a description of the modern-day Lady Finger potato, Solanum Tuberosum: “Lady Finger is a great heirloom variety. Its form is slim, connected tubers, not unlike the form of ginger. The flesh is yellow, and they taste delicious.” The Lady Finger potato was also grown at Fraser’s Lake, in northern British Columbia — which means it made its way to Fort St. James and probably, Fort Alexandria and other posts in the territory. From Anderson’s unpublished manuscript, “British Columbia,” I have this information:

“Potatoes yielded well. In 1839 from fifteen bushels of cut seed seven hundred bushels were gathered. They were of the Ladies’ Finger variety, planted in a piece of light sandy soil which had been under uninterrupted crop with little or no manure for nearly thirty years. A heavy coating of stable manure was given as a preparation for the crop alluded to, and the season proved very favorable.”

Of course, the fur trade potatoes were not the only potatoes that might have appeared in New Caledonia, or modern-day British Columbia. There were always potatoes grown by the Natives in North America, whether the potatoes traveled northward from South America or were given to Natives on the coastline by the Spaniards or Russians, they have existed for many years. The Haidahs and Alaskan Tlingits have grown potatoes for two hundred years or more, as have the Nootka people and the Makah at Neah Bay. These potato crops have existed for such a long time among some of the Native tribes that they consider them traditional foods. Terry Glavin, in his book The Last Great Sea: a Voyage through the Human and natural history of the North Pacific Ocean [Greystone Books, 2000], writes: “On question that has vexed historians and anthropologists is how it came to pass, exactly, that as early as the 1850s just about every native community within sight of Mount Baker… was growing potatoes.” [p.87]

The humble potatoes, which begin their history in South America, have taken many paths in their journeys around the world since Spanish sailors brought them home to Spain as early as 1570.  Who knows how that isolated patch of potatoes made their way into the wilderness fifty miles from Fort Alexandria; it is possible they have been growing at that place for hundreds of years.