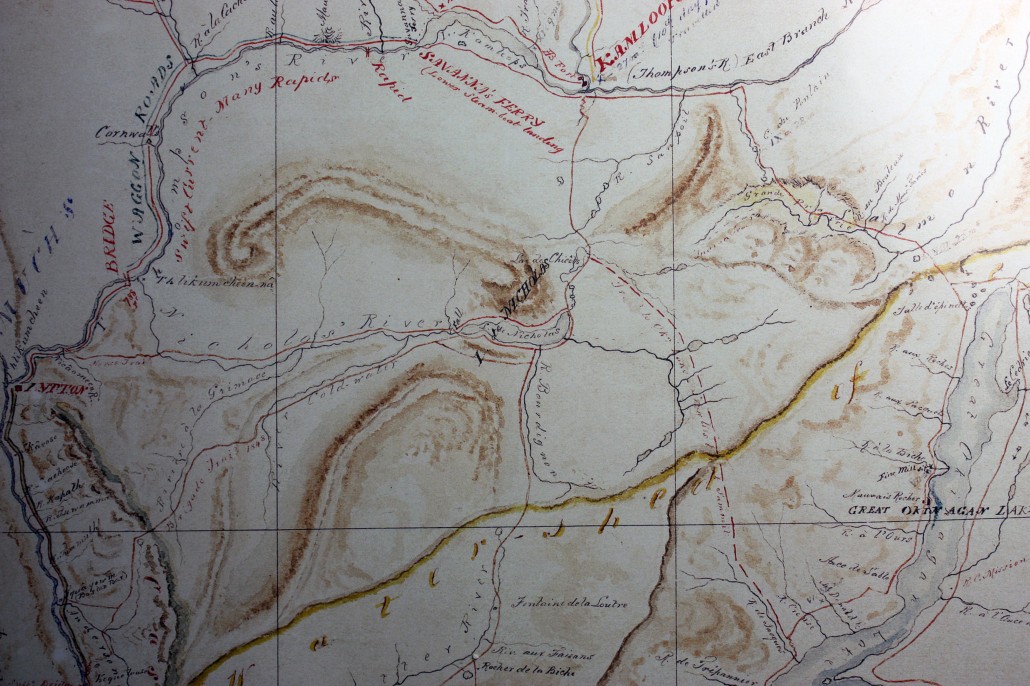 The Nicola Lake section of Anderson’s 1867 Map of British Columbia, CM/F9, BCA. Courtesy of the Royal BC Museum, BC Archives. Detail from original map

You will see, above, a portion of Alexander Caulfield Anderson’s 1867 Map of British Columbia. At the top is Kamloops Lake, with the Kamloops post perched at its east end. Between the lake and the mouth of the Nicola River (called here, Nicholas’s River) the Thompson River is blocked by a series of rapids and is very dangerous. Hence, to reach the western part of their territory, the fur traders always rode over the hills south of Kamloops to the Nicola Valley.

On the left hand side of the image you will see Okanagan Lake, and the brigade trail that led up its west side to cross Grande Prairie and travel, via Monte Lake and Creek, to the South Thompson River east of Kamloops. This was the old brigade trail that led south to the Columbia River at Fort Okanogan, and after 1847 this trail was more or less abandoned, as a brigade trail at least.

You will also see a trail that followed up Riviere de Jacques, at the south west end of Okanagan Lake. This trail cut across the hills west of the lake and ended at Stump Lake, where it joined the trail to Kamloops. (Note the switchbacks in the trail just south of Kamloops, where they descended the steep hill). Obviously this was a trail well known to both fur traders and Natives, but it was never used as a brigade trail for heavily loaded horses. A letter written by Anderson and discovered by me after I had finished the book, clearly indicates that as late as 1849, Anderson’s outgoing Fort Colvile brigades rode over the old brigade trail via Grande Prairie and Monte Lake.

There is another trail shown on this map, that is barely visible at the top of the page. It leads west from the post of Kamloops, and follows the north shore of Kamloops Lake all the way to Carabine Creek. Anderson first rode over this trail in December 1842, on his way to Fort Alexandria. Obviously he approved its use as a brigade trail, for the very next spring the Fort St. James and Fort Alexandria men came south, via that route, to Kamloops.

The next trail on this map is the trail that Alexander Caulfield Anderson, and five of his Fort Alexandria men, traveled in summer 1847. They had ridden across the hills from Kamloops but followed the trail that led west, along the north shore of Nicola Lake. Where the Nicola River (“Nicholas’ River”) flowed out of the lake, they waited to meet Blackeye, who was to guide them by his new road to the Fraser River. Blackeye did not appear, and the explorers continued their planned ride north to the ford that would take them across the Nicola.

You can see where “Nicholas’ River” turns sharply north, though a red line continues west to the Nicoamen through a gap in the hills. When Anderson reached that ford he found the water too deep to cross, and he followed the east bank of the Nicola all the way to Thompson’s River. The men borrowed canoes from the Natives who lived there, and crossed the Nicola River at its mouth. Then they walked down the south bank of the Thompson River to the Nicoamen — and it was there, or near there, that they met up with the Native man who would guide them down the Fraser River. This was Pahallak. For more information on this interesting Native, see this post: http://nancymargueriteanderson.com/pahallak/ 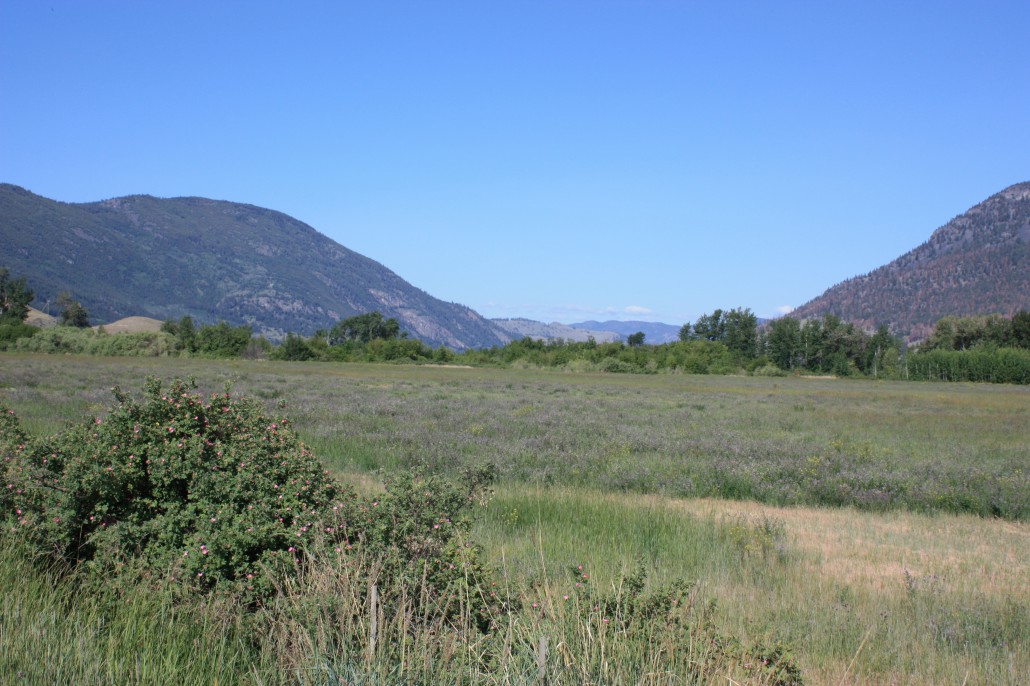 There are two more trails to speak of, and the next trail leads from the west end of Nicola Lake, south-west down the Coldwater River toward the range of rugged hills that separated the Nicola Valley from the canyons of the Fraser River. As he was descending the Fraser River in 1847, Anderson’s Native guides showed him a little bit of the west end of this trail. Satisfied that this route might work for the fur traders, Anderson continued his exploration down the Fraser River to Fort Langley, to see if this part of the trail was feasible.

On their return from Fort Langley that year, the explorers traveled by the Similkameen trail, via Anderson’s River [Boston Bar] and over the hills to Maka Creek and the Coldwater River. Though Anderson said this trail would require a lot of work, he considered it quite feasible as a brigade trail for horses.

As you can probably guess, the fur traders were forced to use this trail the very next summer, when Indian wars all along their old route down the Columbia River made it too dangerous to travel out to Fort Vancouver [Vancouver, WA]. Their outward journey by the Coldwater and Anderson’s River was “harassing,” the inward hell on wheels. When they stumbled into Kamloops the Gentlemen of the fur trade sent Henry Newsham Peers to explore the piece of the route that Anderson had not been able to explore in 1846 — Blackeye’s Trail. Though in 1849 the fur traders traveled out by the Coldwater River route, they returned to Kamloops via Blackeye’s Trail over the Coquihalla Mountain.

This alternative trail led east from Fort Hope over the Coquihalla Mountain, all the way to the fur traders’ “Similkameen” [Tulameen]. From that point the men rode north past Otter Lake, through pleasant open valleys that led them all the way to the river that flowed into Nicola Lake from the south — Riviere de Bourdignon [Quilchena Creek]. They followed along the Nicola’s south shore to its east end, then mounted the hills between the Nicola Valley and Kamloops. They were fortunate. For the most part this new trail worked well for them. There was a difficult chunk of road close to Fort Hope where they tended to lose some horses every year, but they generally got the men and goods safely out to Fort Langley, and safely in. This mountain road became the new brigade trail from Kamloops to Fort Hope, and many were the men who rode over this mountain to Fort Hope.

So as you can see, the Nicola Valley served as the crossroads of the fur trade in British Columbia after 1846. There is a ton of history in this beautiful valley, and it should be celebrated. It probably is.

The book “The Pathfinder,” is out of print (as far as I can see), but I have some copies left, which would cost you $20 plus shipping. Get in touch with me through my contact sheet if you wish a copy.

When the next post in this series is published, it will appear here — and here it is: http://nancymargueriteanderson.com/nicola-lake/

Oh, and by the way, it is interesting to know that the flowers that grace my header also grew in Nicola Valley! I don’t know if they grow there now, but they did then. See this post for more information: http://nancymargueriteanderson.com/the-camas/