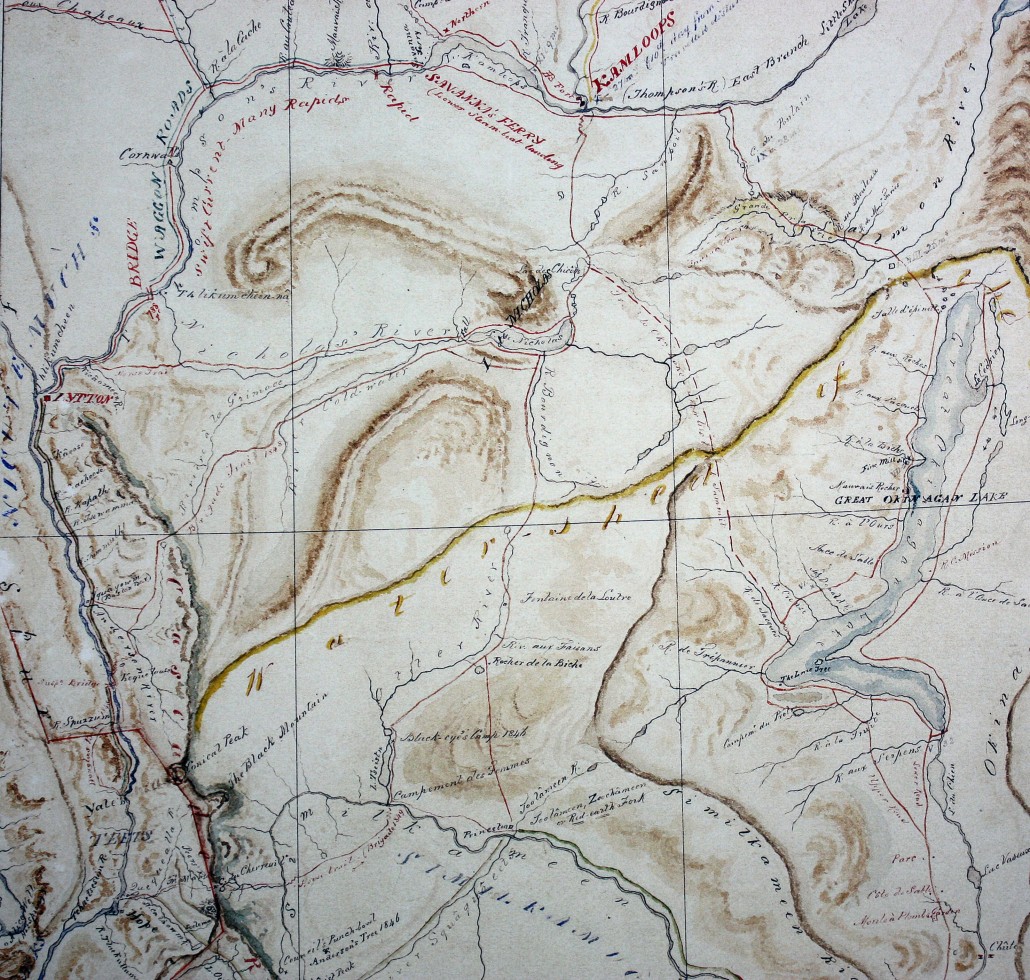 A.C. Anderson’s map of British Columbia, CM/F9, courtesy of the Royal BC Museaum, BC Archives. Detail from Original Map

From the grasslands of Nicola Lake, the men of the various brigades reached Kamloops by crossing the highlands between the Nicola valley and the Kamloops Lake valley. It’s a beautiful country, quite different than the Nicola. The hilltop (when I saw it at least) is almost tundra-like, with numerous small lakes scattered across a dark, rock-bound plateau, with some grass-covered hills.

As we mount the hills from Nicola Lake by the old highway [not the new], we reach Stump Lake. It is mentioned in the journals of the fur traders, and so its name is very old. The second lake along the old route is Rock Lake, and the hill behind is called Brigade Hill. Though we are nearing the top of the hills, we are still climbing at this point. The plateau at the top seems very bare — at least that is the way I remember it. But Anderson remembered it differently, as you will see.

For the fur traders who rode horseback, it was an easy journey across the hills. Alexander Caulfield Anderson traveled over these hills on several occasions. In 1846, Anderson left Kamloops but avoided the plateau, following the north shore of Kamloops Lake west to the Thompson River [See the next post in this series]. That year his explorations took him through Hat Creek to the Fraser River, and via Anderson and Seton Lake to the Lillooet River and, eventually, Fort Langley. You can follow part of this journey beginning at these links: http://nancymargueriteanderson.com/anderson-seton-lakes/

However, Anderson returned to Kamloops from the south, passing through the Nicola Valley and crossing this height of land for, I believe, his first time. This is what he wrote. They begin their journey at Otter Lake, near modern-day Tulameen, B.C.:

Monday 8. Fine. Set out 3.45, 6 miles along the little river, crossing twice and passing a third small lake [Tynne Lake] connected with the rest [Otter Lake]. Leave river and strike across through fine country till we fall on the Louchamean road a little above the Rocher de la Biche. Proceed along it about 10 miles westward of N., then 5 miles N.N.E. to encampment on McDonald’s or Bourdignon’s River [Quilchena Creek], a steam falling into Lac de Nicholas.

Tues. 9th. Fine. A missing horse delayed us till 5 o’clock [am]. Follow along the river 6 miles to Lac de Nicholas, then 4 miles to the second ford over a stream coming from S.Easterly direction [Nicola River flowing into Nicola Lake from the east]. The water was too high for us to cross loaded, so we carried the baggage over upon a tree and drive the horses across light. Breakfasted here. This is a much frequented summer fishery of the Nicontamenes… At 9 3/4 set out again. At 1 o’clock reached San Poila River [Campbell Creek] where we put down for a couple of hours to repose the horses, whose feet are very sore — they having been constantly on the march since spring. Leave San Poila River and strike across through a beautiful country to Kamloops, where we arrived at 6 1/2 pm.

So Anderson found the country on the height of land quite beautiful, where I found it a little stark and tundra-like. By the way, “San Poila” is a name often used in the fur trade, and generally it means “No furs.”

In 1847, Alexander Caulfield Anderson left Kamloops at 10 o’clock, and camped that night at the west end of Nicola Lake. It took his party two days to cross the hills and reach Nicola Lake, and this is what he had to say:

Wed. 19 May [1847]. At 10 am set out from Kamloops, striking towards Lac de Nicholas. At 5 pm (having delayed to refresh the horses during the interval) we reached the first brook running towards Lac de Nicholas, where we encamped…  I met with an untoward accident this afternoon which nigh put an end to my exploration for the nonce. My horse stumbled & rolled completely over, I narrowly escaping a broken leg. Fortunately, though painfull [sic], the injury is less severe than I first feared. Fine and clear.

May 20th. Sultry. Camped at the West end of the lake where I had appointed to meet Blackeye, from whom I hope to get some information in regard to the country we are to pass through. He is not yet arrived. There is a camp of Indians here and a larger one near the Eastern end, both drawn together by the carp fishery.

They spent the first night at Stump Lake, or at the feeder stream north of the lake. On the next night they camped at the West end of Nicola Lake, having traveled along the north shore of the lake to the place where the Nicola River flowed out. We know this because he says in his journal, that:

May 21. Very sultry. Pursued the usual road followed by our trading parties on their way to the forks [of the Thompson’s River with the Fraser?] But on arrival at the ford we found it impracticable from the height of the water. Thus we are under the necessity of prolonging our journey by going to the mouth of the stream [Nicola River] where we expect to find canoes.

Showery weather, with strong westerly gale all day. Leave encampment at 4 1/2 am; in two hours reach the ford of R. la Grimace [Maka Creek], a feeder of Nicholas [Nicola] River, bearing from our encampment N.E. by N. Thence three hours to the cold water river [Coldwater], another tributary of Nicholas’ River. Cross and follow down the right bank, through a fine country, till its junction with the main stream, a distance of about 20 miles, E.N.E. At 5 reach the West end of Nicholas’ Lake; 6 3/4 encamp near the discharge of Bourdignon’s or McDonald’s River [Quilchena Creek].

June 11. Heavy thunder showers, with hail during the day. Breakfasted near our camp of 19th ulto [May]; and at 2 1/2 pm reach Kamloops after an absence of 24 days, including those of departure & arrival. I have directed Mr. Michel Ogden to send a couple of additional horses, to meet the party in a few days from this, and tomorrow morning continue my route to Alexandria.

It sounds as if the weather was too bad for enjoyment of the scenery that year. Perhaps he saw it the same way as I did, bleak and dark. However, the trail worked, and in 1848, the brigade came home by this route. Henry Newsham Peers kept a journal. He had little to say. After a particularly difficult journey, he was too tired and dissatisfied to notice the countryside:

18th August. Marched about ten miles to a small River.

20th August. Marched along & encamped at the east end of Nicholas Lake about 8 miles. [They had gone along the south shore of the lake].

I don’t think we know exactly where the brigade trails went, but there is a Brigade Lake up on the height of land — and its creek does drain into Campbell Creek. That might have been one of their regular camping spots along the San Poila River.

From the top of the plateau the fur traders would always have descended the hills to the Kamloops post. We will not. From this ridge of hills we will side-step Kamloops,  and follow the north shore of Kamloops Lake west to Savona Ferry and the 1843 brigade trail. This trail led north from Kamloops to Lac la Hache via Loon Lake and Green Lake, and it was only used after 1843.

A description of this trail is found here — and this is the next link in the Following A.C. Anderson around British Columbia thread: http://nancymargueriteanderson.com/1843-brigade-trail/

I did not have this information when I wrote my book, and so some of this is new to me, and to other brigade trail researchers.

I still have a few copies of The Pathfinder if you want it, for $20 Canadian plus shipping. My second book, “The York Factory Express,” is being published right now, and you can purchase it, if you wish, through my publisher, here: http://ronsdalepress.com/york-factory-express-the/ Thank you!