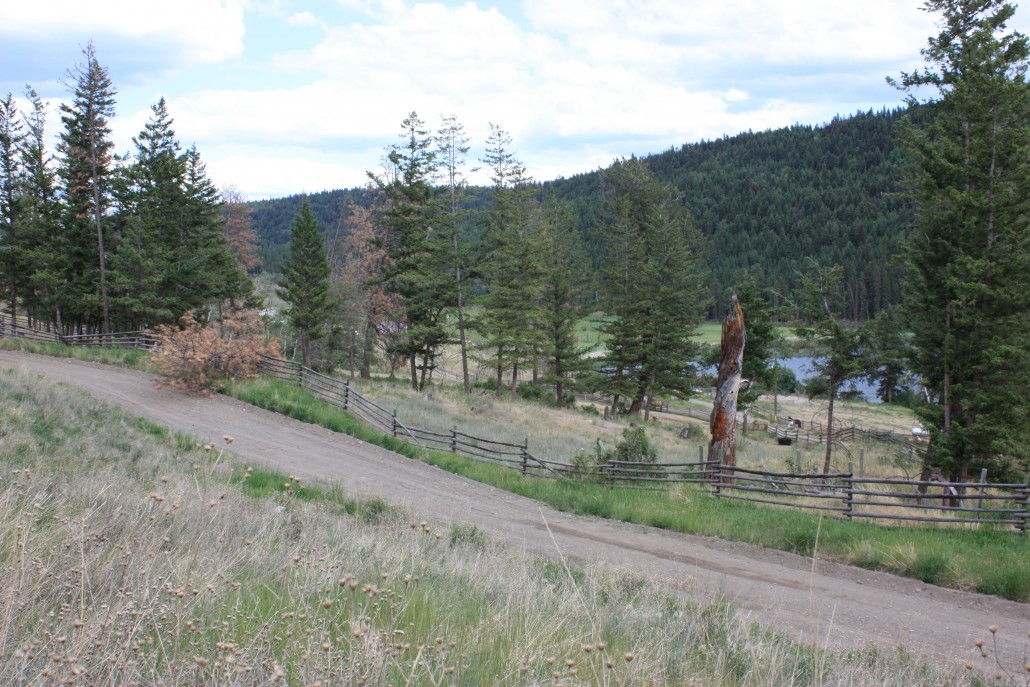 The east end of Loon Lake, British Columbia, is on the 1843 brigade trail and it is likely that many brigades spent the night here. We look toward the south, where they would have ridden from behind the hill and down the creek on the left side of the photograph.

This blogpost has been rewritten, with lots of new information. I have learned much more about the trail since I wrote this the first time.

In November 1842, Alexander Caulfield Anderson rode north from Kamloops, over the newly explored trail that was to replace the old brigade trail over the North Thompson plateau. Apparently Anderson approved its use, for in 1843 the New Caledonia brigade rode out over the trail in springtime, and returned later in the summer.

The brigade men returning to Fort Alexandria from Forts Vancouver [before 1848] or Langley [after 1848], would sort their trade goods at Kamloops and load them on fresh horses, with each horse carrying two packs of ninety pounds each. In my last post I have written about the ride from Kamloops to Copper Creek, where they rested at Campement a la Carbine — see the map below: 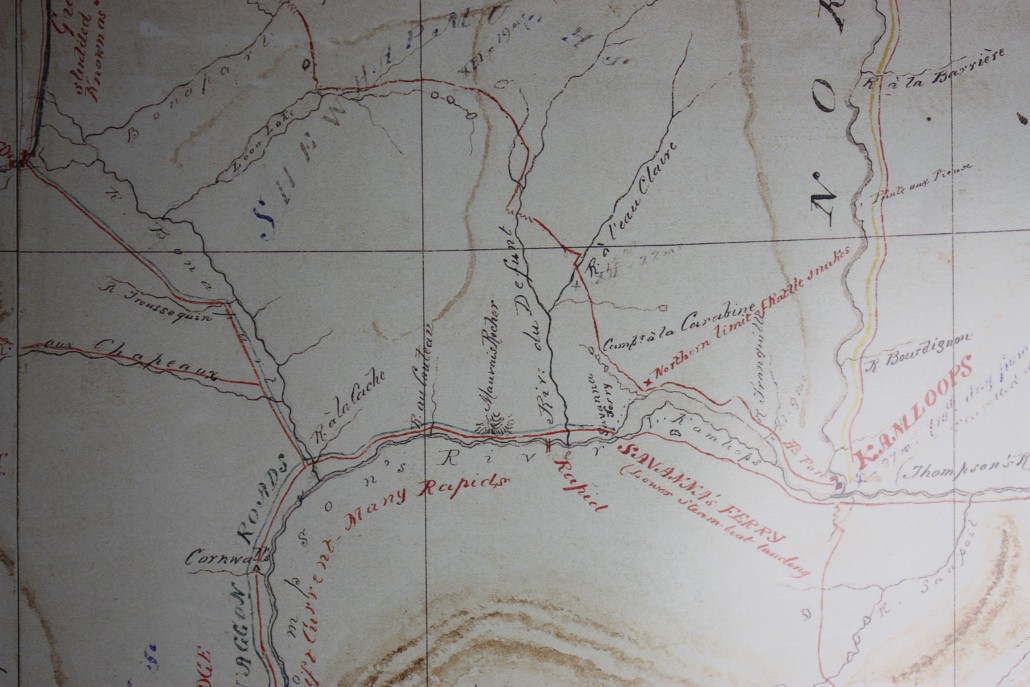 From A.C. Anderson’s 1867 Map of British Columbia, the section of the province between Kamloops and Loon Lake. Map CM/F9 courtesy of the Royal BC Museum, BC Archives, Detail from original map

According to Alexander Caulfield Anderson’s map of the brigade trails, Criss Creek was known as Riviere a l’eau Claire, or Clear Water River. So, let us begin the journey from Copper Creek, to Loon Lake. You can see by the map above that there are some obstacles in their way.

From Hudson Bay Spring, the HBC men rode north, fording Riviere a l’eau Claire [Criss Creek] east of its junction with Sparks Creek. Anderson noted that the ford on Criss Creek was about twelve yards wide.

On the north bank of Criss Creek the trail climbed a hill and proceeded northwest, to Riviere de Defunt [Deadman River]. The Secwepemc called this river “Hai in whol,” which translated as “circle, or detour.” The name fitted its route, as the river circled the base of the Thompson Plateau, leading them into Native communities on Loon and Green Lakes.

The HBC men did not take the long route around the base of the plateau. Switchbacks led them down from the heights to the banks of the Deadman, and once they had forded the twelve-yard-wide stream, more switchbacks led them up a high, steep hill on the west bank of the river. “A high hill at each side of the R. du Defunt,” Anderson wrote, “That on the east clear of wood, on the west a steep hill, as already noticed, thinly wooded.”

Once atop the Thompson Plateau, they traveled along its summit about six miles [according to Anderson], and crossing over Tobacco Creek followed its tributary stream to Chartrand Lake. This is probably the lake that Anderson called “The Beaver Swamp,” and he wrote that the road between the Deadman River and the Beaver Swamp was “wooded with trees of no great diameter, chiefly Douglas Pine and Pinus Banksiana, a tree closely resembling the Scotch Firs.”

According to Anderson, the Beaver Swamp was about six miles from the Deadman River ford. The brigaders rode northwest from the “swamp,” following the series of lakes (including one called Hudson Bay Lake, according to my Land and Forests Map) that lay along Brigade Creek. At this point the HBC trail circled around HiHium Lake, though some distance away from it and the rocky, dry, forested wilderness that was the Arrowstone Hills [notable for its hoodoos].

Brigade Creek led them down from the plateau to Loon Creek, which they followed west to the east end of Loon Lake. Anderson estimated that Loon Lake was about eleven miles from the Beaver Swamp. From Loon Lake, the HBC men mounted the Bonaparte Plateau, and traveled due north to the banks of the Bonaparte River….

But that is in the next blogpost. In his unpublished manuscript, “British Columbia,” Anderson described the country the brigade trail passed through:

Beautiful prairies, bordered by lofty hills sparsely scattered with timber, stretch around… Groves of the Aspen appear here and there. The Balsam poplar shows itself at intervals only, along the streams. The white racemes of the Service-berry flower and the chaste flowers (blossoms) of the Mock Orange, load the air with their fragrance. Every copse re-echoes with the low drumming of the Ruffed Grouse; the trees resound with the muffled booming of the Cock of the Woods. The “Pheasant” [Sharp-tailed Grouse] whirrs past; the scrannel-pipe of the larger Crane — an ever watchful sentinel — grates harshly on the ear; and the shrill whistle of the Curlew as it soars aloft aides the general concert of the re-opined year. I speak still of Spring; for the impressions of that jocum season are ever the most vivid, and naturally recur with the greatest force in after years.

I think he missed the country side he rode through in his early years. He is describing the entire brigade trail, of course, and parts of it were much more open than the woods that surrounded this part of the trail. And yet, even here the woods are clear of heavy underbrush, quite unlike what we experience on the coast.

There was another difference. When my sister and I visited Loon Lake, we were delighted by the many little ferret-like creatures that popped out of the cattle guards to whistle at us in alarm! They are a marmot, apparently, but certainly not the yellow-bellied marmot (which I also spotted there). There are 40 or more breeds of marmot in British Columbia, and I would be delighted if someone were able to identify these comical creatures for me.

At at any of these little lakes south east of Loon Lake and along this section of the 1843 brigade trail, we can imagine the brigades setting up their camp for the night. Picture the gentlemen who led the brigades riding in and dismounting from their horses. The provisioning brigades that followed immediately behind would unload their horses and light the campfires, putting the supper on to cook. The other brigades trotted in moments later, with the men unpacking the horses and turning them loose to roll in the grass. As evening falls, the men sit around the fires, smoking and talking. Then they roll themselves up in their blankets and sleep on the ground. Their work began early the next day — at 4 am, when they would begin to catch and load their horses. By nine o’clock, they would be ready to move on.

For information on the trail over the Thompson Plateau, that this new trail replaced in 1843, see this: http://nancymargueriteanderson.com/brigade-four/

To go back to the first of the Following A.C. Anderson Around British Columbia posts, see here: http://nancymargueriteanderson.com/pathfinder/

The next post is now published, after being edited at least twice! Its link is here. It takes us to Green Lake: http://nancymargueriteanderson.com/green-lake/

My second book, with Working Title “York Factory Express,” is now being offered to a publisher. I am beginning to write my third, which is a fuller story of the years that covered Anderson’s four explorations and the discovery of the brigade trails they later used. Its a massive chore: I have tons of information and a possible two or three books here, but we will see what I can dig out and make work.