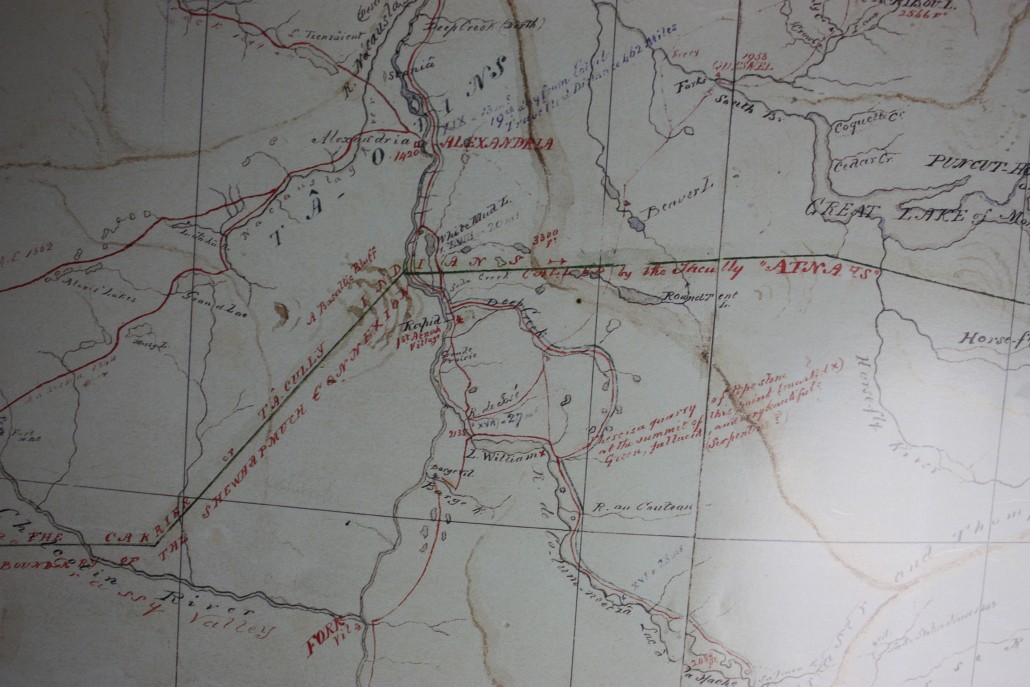 Le Barge Native village stood at Chimney Creek in the 1840’s. How did it get its name? From CM/F9, Courtesy of the Royal BC Museum, BC Archives. Detail from Original Map

I was asked an interesting question the other day: Where do I suppose that the name of the Barge village, on Fraser River, came from?

Le Barge was a Secwepemc village on the Fraser at Chimney Creek, southwest of Williams Lake, B.C. It still exists — or at least there is still a village and Reserve at Chimney Creek. Is it the same village or a different one: I do not know.

On his 1867 Map of British Columbia, Alexander Caulfield Anderson clearly identifies the location of “Barge Village,” situated on the Barge River, southwest of Lac William. A quick look at my Land and Forests map tells me that this river is Chimney Creek, and I have noted on the map that there is a canyon with rapids at the mouth of the Creek. Below that is Alkali Creek, opposite the mouth of Chilcotin River, and south of Alkali, with many rapids in between, is Dog Creek.

However, on the same Land and Forests map, I have, in the past, identified “Le Barge” as being on the Fraser River west of McLeese Lake and north of Soda Creek. I know where I got that description — it was from James R Gibson’s book, The Lifeline of the Oregon Country: The Fraser-Columbia Brigade System, 1811-47 [UBC Press, 1997]. In his map on page 83, he has indicated that Le Barge [Macalister?] is located there. Note the question mark: even he does not seem to be certain where it is.

I have always known about the two locations, and presumed that one was the winter village, while the northern location was the summer fishing village. There is in fact a modern Secwepemc fishing village located at about the site of the northern Le Barge, which tends to support that presumption.

So the person who broached this subject with me wants to know how Le Barge got its name. I don’t think I can answer that, but I do know that it was named “The Barge” long before Alexander Caulfield Anderson reached Fort Alexandria. The second question is more interesting to me right now, but if I find the answer the the first I will also let you know.

And if anyone out there knows the answer — please let us both know. There is an amazing amount of information just floating around out there, and someone might know the answer.

I don’t think Alexander Mackenzie came this far south in 1793, though people don’t really know. Simon Fraser did, in 1812. I have Stephen Hume’s book, Simon Fraser: In search of Modern British Columbia [Harbour Pub., 2008], and I will see what he has to say.

[p.237] Somewhere between Tingley Creek and Beaverdam Creek — W. Kaye Lamb thinks in the vicinity of Macalister, since the journal says the next day’s run to Soda Creek was about nineteen kilometers — Fraser landed to parley with people who began arriving on horseback.

No mention of the name Le Barge here, at the place where I thought The Barge fishing village was located. But I learned that the Soda Creek Secwepemc band run a heritage and cultural camp at Xats’ull, where the Fraser runs into a Gorge. That will be the supposed fishing village that I knew about, just above the Soda Creek rapids — the fur traders’ “Atnah Rapids.” Hume tells us that a rawhide suspension bridge once crossed the river here, but that it was burned to prevent travel during the small pox epidemic.

Now, I understand that Le Barge is a French name, rather than Native, so Simon Fraser would not have found it here. But I wonder if the name had anything to do with the bridge that crossed the river?

South of Soda Creek, Fraser’s men attempted passage through the Atnah Rapids. There was another set of rapids, in a canyon further south, just north of Chimney Creek. Then:

[249] “This would be where he crossed the river,” he [Hume’s guide] said in the vicinity of Chimney Creek. “He talks about a house and there are the remnants of a house here. You can see a gravesite and even vestiges of the trail they cut in the bank [for a portage].

Hume’s guide told the writer that there were signs of a village site here, with flat spots and a good sturgeon fishery. Quiet water, and a good beach. There were other signs as well, and this is apparently how you find the ancient sites — the Secwepemc traded for giant rye grass which they planted and used for weaving mats to line their pit houses. Find the rye grass, then find the pits that used to be the Secwepemc Kikwillies. Other signs of old Native villages might be the presence of bush sage, wormwood sage (a natural mosquito repellant), and common yarrow.

And that is all that Stephen Hume has to say of Simon Fraser’s journey past Chimney Creek. Fraser might have mentioned Le Barge in his journals, but Hume did not include that information if he did. So far there is no mention of Le Barge here, so the name probably came later — after Fort Alexandria was constructed in 1821. I don’t have its early journals, but I know there are many mentions of The Barge in Alexander Caulfield Anderson’s Fort Alexandria journals.

In his Notes of the Indian Tribes of British North America, Alexander Caulfield Anderson wrote that the “Shewhapmuch (Atnahs of McKenzie) composed a large branch of the Saeliss family, occupy the banks of Thompson’s River, and along Frazer’s River to the Rapids Village, twenty miles below Fort Alexandria.” As you can see on his map above, he did call this Soda Creek Native village the Rapids Village.

There is plenty to do in the way of research. I have found no mention of The Barge in Anderson’s writings (all after 1860), but it is mentioned in his Fort Alexandria journals, 1842-1848. That might help. I also have Sam Black’s 1839 Map which does show Le Barge — but it will take some strong studying to figure out where he places it! Sam Black’s map is upside down — meaning that north is on the bottom of the map and south at the top. As you can guess, that causes some confusion when comparing it with another map that has a more normal orientation.

Another map might help us, too, and that is Archibald McDonald’s 1827 Map of the Thompson’s River district. I don’t have a copy (though I used to), but I can easily access it in the B.C. Archives. We might not be able to figure out why Le Barge was named Le Barge, but we might know how early in years the name appeared, and on how many locations it was found. We can but hope that we will find the answer to this little puzzle.

I will also go through the brigade trail journals to see if I can figure out how the upper Barge village was named, if it actually existed. Another book to go through is Simpson’s 1828 Journey to the Columbia [HBRS]. As it happens, I own a copy of the book and so can access it fairly easily. Both he, and Archibald McDonald, made a journey down the Fraser and Thompson Rivers, and through the canyons to Fort Langley, looking to see if it were possible to bring the furs out via the Fraser. This is what I wrote in The Pathfinder, re: Governor Simpson’s explorations in 1828:

In 1828, Governor Simpson of the Hudson’s Bay Company decided that the Fraser River should be explored once more and with the help of Chief Traders James Murray Yale and Archibald McDonald, then in charge of Thompson’s River post, made a two-pronged descent of the Fraser and Thompson Rivers. At the Thompson’s junction with the Fraser the parties met up and exchanged horror stories, then frightened themselves badly in the descent of the river through the canyons. Everyone survived, but Governor Simpson declared that descending the Fraser River by boat would result in certain death 9 times out of 10.

Obviously this exploration is going to take more than one blog post, and so I will continue my series here, when the next post is finished:

And please get in touch with me if you think you know the answer, or if you have any other suggestions on where to look for the answer. Writing and researching history should always be a collaborative venture, and stories found should be shared.

2 thoughts on “Looking for Le Barge”