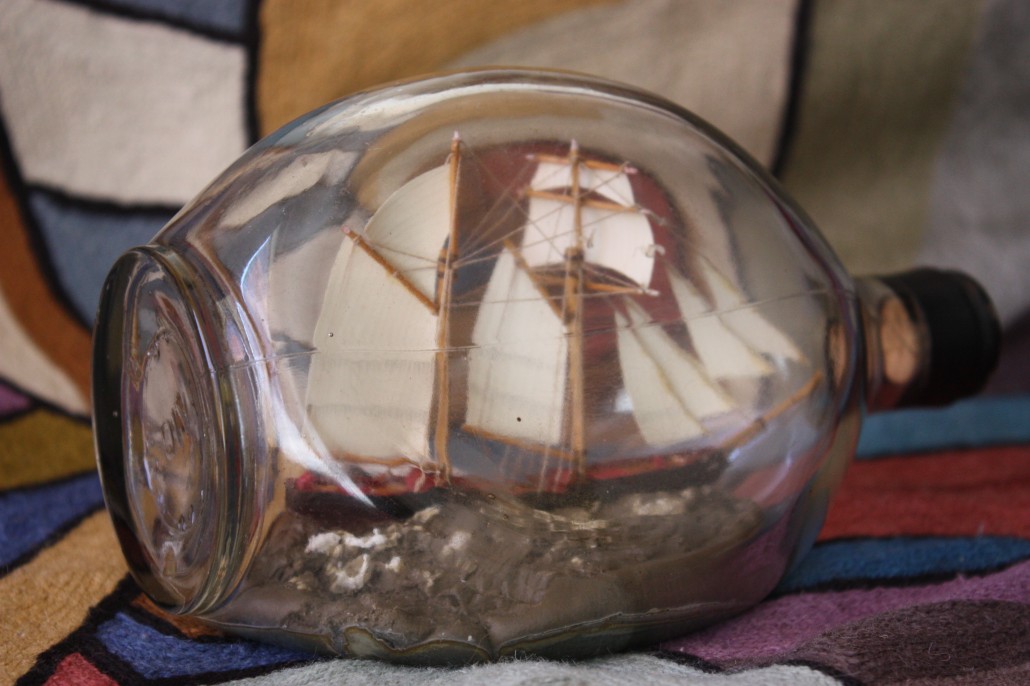 I followed the story of the British Sovereign, and discovered she was a 350-ton barque, built in Quebec in 1828. She was then transferred to Australia, and carried many loads of convicts to Australia from London. In 1847 she was wrecked on the south side of Sandwich Island, (now Efate), New Hebrides (now Vanuatu), on April 22nd. One seaman was lost at the time of the wreck, but most of the others were murdered by the natives. One boy and a number of native members of the crews were spared, to be rescued by the Clarkstone and Isabella Anna.

Alexander Caulfield Anderson was one of the most significant men of his time (the 1840’s) in the early history of what later became British Columbia, and so I thought some of you might want to know how he came into territory. Though his story differs from that of many other fur traders, in this respect it does not. Many young men began their fur trade careers at Lachine, nine miles west of Montreal.

Anderson was born in India in 1814, and grew up in London:

We resided within easy distance of the metropolis [London], near the border of Hainault Forest, until it was time to select a profession for my future years. A cadetship in East [India] — the arena in which most of my relatives of the contemporary generation have since figured, was at one time contemplated; but my fancy lay not thitherward. Like others of my age I had read some of Mr. [James Fenimore] Cooper’s novels, and, emulous of his heroes, I longed for a life of adventure in the, to me, mysterious wilderness of the West. My yearning, already sufficiently excited, received afterwards a fresh impulse. I met at a dinner-party two veteran Chief Factors of the Hudson’s Bay Company, home on furlough — John Clarke and Alexander Stewart. Stirring anecdotes of adventure by flood and field filled my attentive ears, and confirmed the desire, if indeed it had ever wavered, that I had formed in favor of the West. To be brief, it was decided that I should join the Hudson’s Bay Company, in which service I was duly accepted as an “Apprentice Clerk” — the primary step towards future advancement. [A.C. Anderson, “Life at Lachine,” Beaver Magazine, June 1952]

His uncle, Alexander Seton, was a partner in Colvile and Co., West Indies rum and sugar importers, whose London offices were at 35 Leadenhall Street. Through Seton’s twenty-year-long partnership with Andrew Colvile, Alexander, and his elder brother James, obtained positions as apprentice-clerks in the HBC.

Alexander signed his contract of service on March 23, 1831, only three weeks after his seventeenth birthday. He purchased a fine gun, a Bible, and other essential items, and in early April boarded the ship British Sovereign for Montreal. Anderson described the vessel that carried him across the Atlantic as a “clumsy merchantman, loaded to the gunwales with a ponderous cargo.”

In mid-summer 1831, Anderson disembarked in Montreal, at a landing that reeked of rotting garbage. He clambered into a lumbering, two-wheeled, horse-drawn cart, called a caleche, for the nine-mile trek to Lachine.

Lachine House, as our domicile was called, was pleasantly seated in the village of the same name, situated at the head of certain rapids which impede the navigation of the Saint Lawrence between that point and Montreal: a large and somewhat pretentious looking wooden building, near which were situated stables and other offices with stone houses and sheds for canoes. This point in earlier times had been a very important station of the North West Company, before its coalition with their opponents of Hudson’s Bay. Hence large fleets of canoes were despatched every Spring on their way to the head of Lake Superior, the point of rendezvous where the magnates of the interior annually assembled, and where all the arrangements for the ensuing year were effected. But at the period of which I write, much of the glory of Lachine had departed. half a dozen canoes of the largest size served to convey the Canadian recruits intended for the remote interior and for the passage of retiring winterers on their return. The rest of the canoe transport was confined to the supply of Fort Coulonge and other posts situated upon the Ottawa or its tributaries, and upon the St. Maruice flowing into the St. Lawrence at Three Rivers. The occasional arrival or departure, however, of these little squadrons, or, as they were termed, “brigades,” was a cheering sight, and seemed to enliven the monotony of our ordinary routine. [Anderson, “Life at Lachine.”]

The HBC’s headquarters was now at York Factory, on Hudson’s Bay. Anderson soon realized that his dreams of adventure in Indian country would never occur at this quiet post. He was employed in desk work, and over that winter he copied and recopied ancient documents filled with English legal terms and scraps of French, under the charge of Chief Factor James Keith. Now fifty years old, Keith had served the NWC in the Columbia district, but to his apprentice-clerks he was a stiff, formal man whom an earlier apprentice described as resembling a dried spider. After their long work day, Keith and his bored clerks sat down to a glass of Madeira with their soup and a glass of port with the pudding. A quick rubber of whist completed the day, and the boys were sent to bed.

Mr. James Keith, the gentleman in question, was one of the Senior Chief Factors of the Service, a man,s till in the prime of life, who had previously seen much of the interior, and who, having amassed a very considerable fortune, now began to ponder about retirement. His position at Lachine, however, and the corresponding consequence in the world of Montreal which it entailed, seemed to be too congenial to render probable any precipitate step of this kind, and so he plodded on, comfortably exercising his responsible duties and very generally and deservedly respected. Alexander Simpson and John McKenzie, my two concurrent “slaves of the lamp,” I being of all the junior, were two well-educated young Scotsman, in all the freshness of their native hills. Thus was composed our partie carree; and never, I suppose, did four men, outwardly staid and decorous individuals, seat themselves [more] regularly round a table; for our Chief Factor was the embodiment of regularity, almost to a caricature… [Anderson, “Life at Lachine.”]

When the brigades came down from the Ottawa River posts bearing their furs, however, Lachine burst into life. The French Canadian voyageurs in their brightly coloured ribbons and sashes pulled their birchbark canoes onto the landing in front of the fort, and everyone rushed down to the waterfront to greet them. Chaos reigned as the voyageurs drank their regale of rum and fought, dance, and filled the air with their ribald songs. In the main house, the servants prepared a feast of baronial proportions, and the guests flooded in from Montreal.

But occasionally, at rare intervals this quiet monotony would be broken. The genius of hospitality would quietly give a jog, and all the dormant sympathies of our Commander’s nature would awaken. Then Mary and Peggy, our two antiquated serving maids (for anything in the shape of a smart ribbon or a comely physiognomy was excluded under the rigid discipline of Lachine House) had their own troubles of preparation. A banquet of baronial proportions was decreed — Buffalo tongues and humps from the remote interior, the muffles of Moose-deer, the tails of Beaver, and barbaric delicacies of all kinds, were to be operated on, mingled with the varying civilized cates [choice food stuffs] that the markets of Montreal could furnish. Daa-niel, the serving man (for Mr. Keith, though not habitually, in some words favored the broad accentation of his father-land) would be driven almost to despair by the multifarious calls upon his attention, and every thing for a while would be in comparative disorder. Then mingled with some of the elite of Montreal, could congregate veteran North-Westers whose names, once familiar as household words, are now remembered only in connexion with the history of the past; referred to in some dispute of national boundary; or recalled by those whose interest in the bygone of the North West is traditional.

Staid and decorous, as of wont, was the outset of these occasional symposia; but soon the ice would melt, the flood of fun which underlay the host’s hard exterior would be loosened, and as if by magic a change ensued, by contrast the most amusing. Flashes of humour, quaintly-told anecdotes of travelling experience, and all the varied stores of a tenacious memory enlivened the usually quiet board, eliciting from the other veterans of the wilderness a flood of similar reminiscence. Barbarous sounds, the names of native chiefs or of remote localities, which if since familiar were at that time strange to me, broke on the ear with almost mysterious significance & then when the cloth was removed songs succeeded: the wild choruses of the Franco-Canadian voyageurs, some of especial adaptation, others, the relics of La Vieille France imported by the ancient immigrants, and at last, if the fun did not grow exactly “fast and furious,” it presented at least a very warm contrast with the wonted frigidity of our every day’s existence.

Then, on the morrow of these occasional white days of Lachine life, came the revulsion; and it was amusing to watch the air of almost penitential decorum with which our worthy commander, after some passing comments on the events of the past day, would enunciate his stereotyped remark, “Now, gentlemen, these Saturna-alia being concluded we will resume our duties.” And back we went, reluctantly enough, to the musty records, or such other superfluous pen-work as the ingenuity of our ruler could devise to keep us out of mischief. [Anderson, “Life at Lachine.”]

In Spring 1832, the governor and council of the Hudson’s Bay Company assigned Anderson to the Columbia district, where Chief Factor John McLoughlin would put him to good use. In April, two flotillas of canoes paddled away from Lachine. The express boats traveled light and fast with papers and accounts for the annual meeting of the Company at Norway House. Behind then came the slower canoes of the brigade, heavily laden with the outgoing provisions and passengers for the interior. One of these brigade canoes carried Anderson away from Lachine House.

Alexander Caulfield Anderson wrote his “Life at Lachine” many years later, and it was supposed to be a part of his autobiography. I believe he wrote this in 1884, on his death bed, and that he died before he wrote more. What stories he could have told! What a shame he did not live long enough to write them!