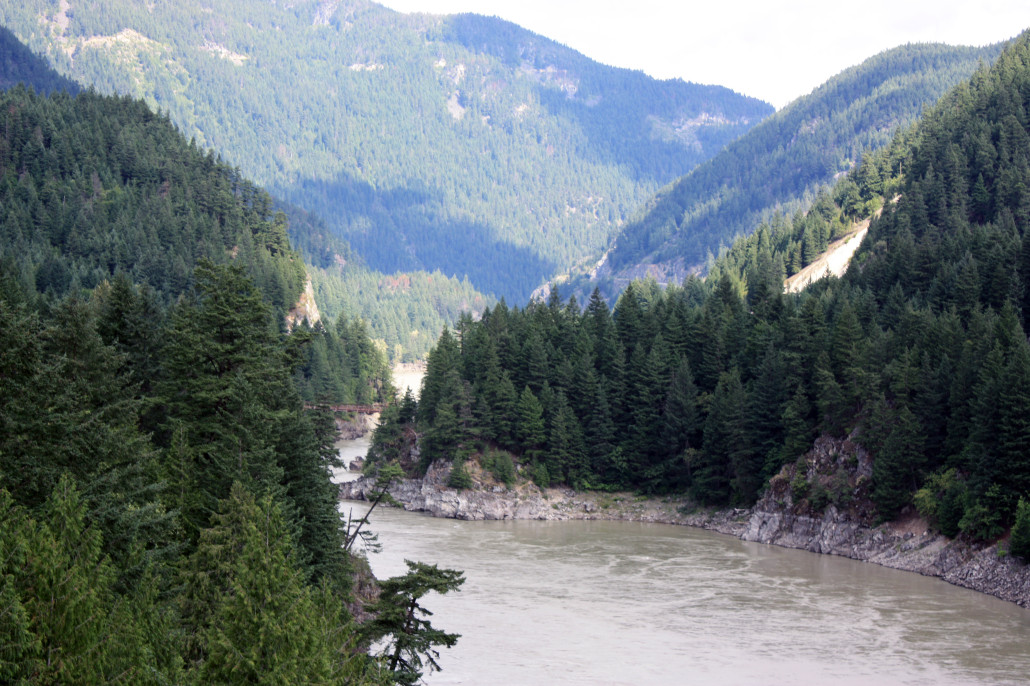 The above photograph shows the Fraser River looking north from the modern-day Alexandra Bridge, toward the old bridge. On this point of land stood the Native village of Kequeloose, and the steep slope on the East bank of the River is the base of Lake Mountain.

In the summer of 1847, Alexander Caulfield Anderson’s exploring party made their way upriver from Fort Langley, travelling in two canoes.

Earlier that summer Anderson had been guided downriver by trails that led over Lake Mountain — trails the Natives used to avoid traveling up the Fraser River through rapid-filled Black Canyon, and what is today’s Hell’s Gate Canyon. The Native man who led Anderson’s party over Lake Mountain was Sto:lo Chief Pahallak, who lived on the Tschsetsesum River near modern-day Chilliwack, B.C..

On their way upriver again, Anderson’s party reached the Native village of Kequeloose at 11 o’clock on June 4, 1847. Kequeloose was built at the southern foot of Lake Mountain. North, up the Fraser River, was Black, and Hell’s Gate Canyons. The fur traders needed a trail that would bring them around these two canyons to the mouth of “Anderson’s River,” just north of Lake Mountain. By following Anderson’s River and Utzlius Creek up the mountainside behind modern-day Boston Bar, they could reach the Nicola Valley and the fort at Kamloops. Anderson hoped that this trail up the hills would prove to be a good brigade trail for horses, through the mountains that separated Kamloops from the lower Fraser River and Fort Langley.

It is important to recognize that the Sto:lo Natives were canoe people, and not familiar with horses. Therefore Pahallak could not necessarily envision whether or not a horse might be able to pass over his trail — never mind the two hundred or more heavily-laden pack-horses in a typical brigade.

When the exploring party reached Kequeloose, Anderson and his men “secured the canoe in the woods, being in charge of Pahallak, and set out in the propose horse portage at 1.40. Having distributed the axes we made the road where necessary as we proceeded, [and] encamped on the summit of the hill at 6 pm. An old man with his followers, to whom I lent an axe for the purpose on my way down, has, during our absence, rendered good service in tracing and clearing the road from Kequeloose up to this spot.”

From the top of Lake Mountain, Anderson walked to the edge of the bluffs to view the foaming river below. “I struck off the road to take a birds-eye view of a rapid which obstructs the navigation near this spot,” he wrote. “Judging from the agitated appearance of the stream as seen from our elevated position, this rapid is a succession of dangerous whirlpools, apparently unnavigable, and I am informed unavoidable by portage.” 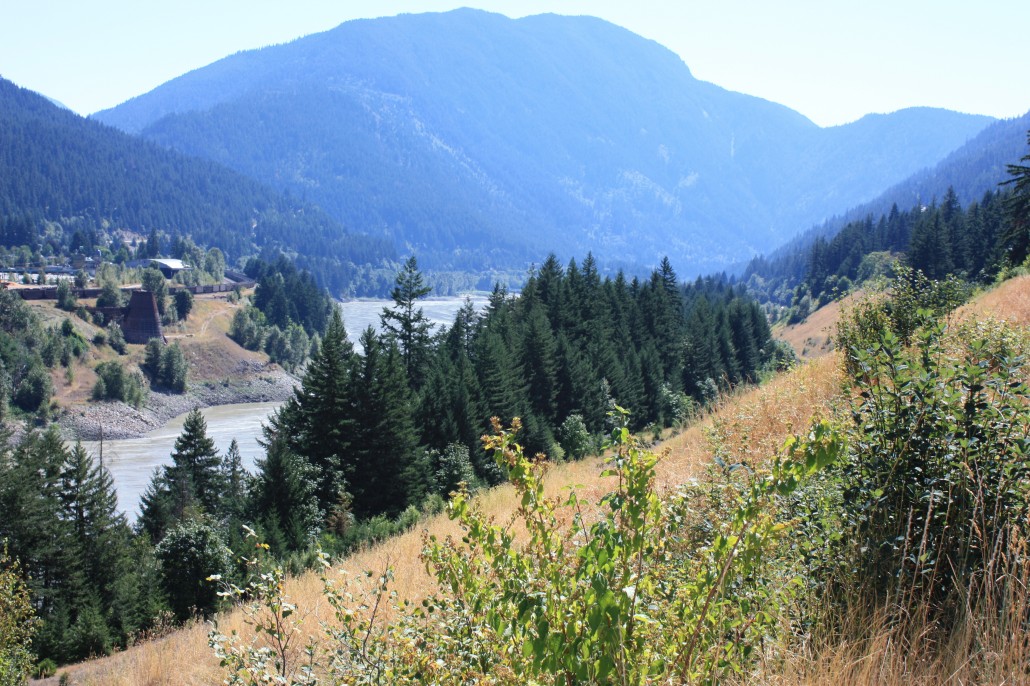 The horse brigades came from right to left over Lake Mountain in centre of picture, and up Anderson River to the top of the mountains to the left.

Anderson does not write in his journal for three days, but on Tuesday 8th of June he noted “We have now encamped at the horse rendezvous, having made the road as we came on from Kequeloose to our last night’s encampment, a good road, clear of all impediment subject to removal & from 10 to 12 feet in width…” They were already at or near the top of the hill behind Boston Bar!

At this point, a Native youth who believed their path was to lead him to the junction of the Thompson River with the Fraser, realized he was being taken a different way. In a burst of rage, he grabbed a fur trader’s gun and threatened Anderson and his men.

This is how the incident was recorded in Anderson’s 1847 Journal:

“The scamp in question seized one of the men’s guns & attempted to pull off the gun cover. Discovering, however, his action, Montigny and myself advanced to prevent him; Mr. [Montrose] McGillivray with the others standing aloof in readiness to repel any treachery on the part of the rest, would they have show[n] symptoms of interference.

“They, however, betrayed no signs of sympathy. The chief actor in the scene upon being grappled with, evinced evident marks of trepedition [sic], and after a momentary hesitation yielded up the gun. I afterwards spoke to the Indians in plain terms, enquiring once [and] for all whether we were to look upon them as enemies or friends in order that we might regulate our conduct accordingly, and whether I was to judge their disposition in general, from that manifested by the individual in question. they all denied in strong terms having any desire to side with him, condemning his conduct, and loading him with long winded objurgations with all the energy of their cacophonous dialect.”

It might be interesting to note which well-known Native chiefs were here, listening to Anderson’s harangue. The Sto:lo Pahallak still accompanied the fur traders, though he would be paid off the next day, as would the Chief from the Spuzzum village, near modern-day Spuzzum [north of Yale, B.C. and south of Alexandra Bridge and Kequeloose]. A Squa-zowm Chief was here: his village was at the mouth of the Anderson River near modern-day Boston Bar. Tsilaxitsa was here, and so too was Blackeye’s Son. Tsilaxitsa was a prominent Okanagan Native, nephew of the Native chief after whom the Nicola Valley was named. Blackeye’s Son was a Similkameen from the Tulameen area.

How do I know these last two men were here?

At the height of land of the Squa-zowm Portage, on the 9th of June, 1847, Anderson wrote a letter to Montrose McGillivray, and kept a copy of it in his journal. The letter read:

“The chief part of our survey being now completed, I purpose entrusting to your care the further charge of the party; intending tomorrow morning to set out for Alexandria…. Therefore you will proceed to [Fort] Okanagan with the horses, accompanied by the men here-in-named, and thence to meet the [incoming Brigade] Boats…. Fallardeau, Lacourse, and Desautels remain with you. Also Nicholas’ Nephew [Tsilaxitsa], Black-eye’s Son, and Laronetumleun — the last as interpreter.”

If you want to know more about Tsilaxitsa, follow this link: http://nancymargueriteanderson.com/tsilaxitsa-okanagan-chief/

In case you are wondering what the requirements for a brigade trail might be, see here: http://nancymargueriteanderson.com/hbc-brigades/

The next in this series of posts is this little side-bar — The Salish Wool Dogs: http://nancymargueriteanderson.com/salish-wool-dog/

All of these stories come from my first book, The Pathfinder: A.C. Anderson’s Journeys In the West. It seems to be now out of print, but I have a few copies left, and until they are gone you can get them from me for $20 plus shipping.

But my second book is available: You may order “The York Factory Express” through my publisher, here: http://ronsdalepress.com/york-factory-express-the/ This book tells the story of the HBC men who journey to Hudson Bay and return every year, in the York Factory Express and the Saskatchewan Brigades. Thank you.

I should mention this: if you want to know why I have these particular flowers on my website header, see this post: http://nancymargueriteanderson.com/the-camas/ These flowers are very important to both Natives, and fur trade historians west of the Rockies!

Thanks for following along, and I hope you enjoy these stories. To tie all these stories together, get The Pathfinder! Only then will you understand why I write what I write.

3 thoughts on “Kequeloose, and the Brigade Trail”