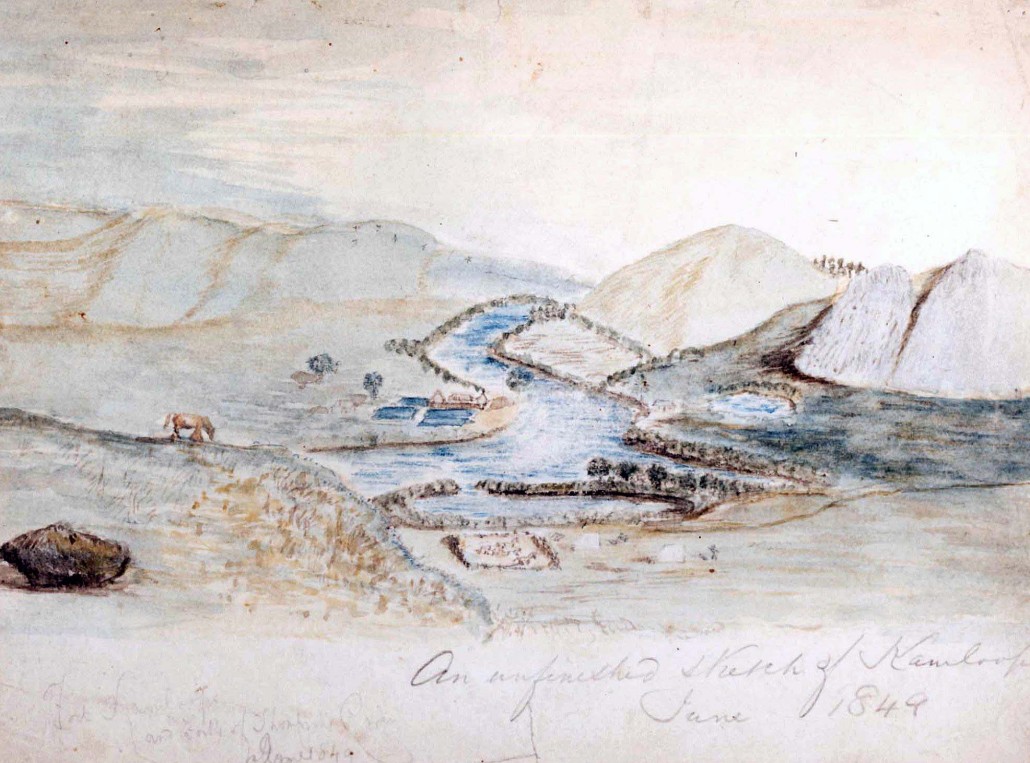 For about five years, from August 1850 to June 1855, Paul Fraser kept the Fort Kamloops post journals. The records are not complete: nor did I copy them all out, but they are an interesting read. Fraser listed many of the arrivals and departures of men from the post, but it is difficult to figure out who these men are. For example:

[September 22, 1850] Late in the afternoon Marrian & Gaspard arrived from Alexa [Alexandria] with the express…

Marrian is Louis Marineau, whose full name was Louis Desasten (Martineau). Marineau was a Canadien and worked at Fort Alexandria, and who always took out the express. Gaspard? I don’t know who he was, but he apparently worked at Kamloops post. Jean Baptiste Vautrin was another Canadien found in his journals, and Fraser called him “Vantrant.” “Neckilus” was N’Kwala, after whom the Nicola Valley and Lake were named.

[September 24, 1850] This morning I was informed that one of the principal Indians of the Couteaux [Nlaka’pamux] was shot yesterday by Neckilus & Courteputts Sons without any Cause assigned, great Excitement prevales amongst the Indians in consequence, and there is no doubt but the relations of the murdered Indian who are both numerous and powerful but that they will revenge his death

“Courtepatte” was another Native in this territory, and I have just learned from the book Kamloops: Trading Post to Tournament Capital, by Ron Hatch, Elisabeth Duckworth, Sylvia Gropp and Shirley Bennett [Kamloops: Thompson’s River History and Heritage Society, 2012] that Courtepatte is the Secwepemc chief, Tranquille. I have, however, discovered, that they were incorrect, and that they were two different men as you will see when the Two Canoes thread reaches Kamloops.

[August 14, 1851] The North River chief arrived. He informed me that the Indian Capot Blanc and party had Come from Jasper House to reside amongst them.

The Natives from the North Thompson River, and those from the Arrow Lakes, traveled to Jasper’s House to trade. Capot Blanc is mentioned in the York Factory Express journals as being at Boat Encampment one year. As you see from below, he resided at Cranberry Lake, in or near Tete Jaune Cache, and I have since learned that he was Simpcw, a branch of the Secwepemc. Simpcw territory covered the upper watersheds of the Fraser River as far down as McBride, B.C., the Columbia (at Boat Encampment), via the Canoe River, and the Athabasca River including the area around Jasper’s House.  As you can see, one of my readers knew who he was (and I should have). See the comments at the bottom of the blogpost.

[September 1, 1851] Arrived William the Atnah [Secwepemc] Little Chief with 4 others  they came for the payment of their Horses lost last fall by St. Paul [Jean Baptiste Leolo] on his trip to Fort Hope in quest of part of the New Caledonia Outfit left there

This is Chief William of Williams Lake and La Barge, on the Fraser, 40 miles south of Fort Alexandria. I believe the father died in the smallpox epidemic of 1862, the son took over his name. I have written about him here: http://nancymargueriteanderson.com/chief-william/

[February 3, 1852] Shot a Small Bull of 1 1/2 years old which I sent to Nekilus [N’Kwala] as he and his Large party are starving which may prevent them from molesting our Cattle which they have not done as yet

N’Kwala had come to the post for help, and Fraser wrote that he “arrived from the Grand Prarie and as usual begging for supplies. This old Man is a Compleat nusance to this Establishment.” Fraser never had a nice word to say of any one, whether white, mixed-blood, or Native.

[February 20, 1852] Murdock McLeod who went to see the Cow found her wounded by arrows, done by Toppis for no cause assigned — he has not been seen today by any one about the Establishment.

Toppis was probably hungry, as no salmon had come up the river that year. A colt went missing shortly afterwards, and Fraser wrote that “As there are a number of starving Indians along the River I am of oppinion they must have Eat him.” Shortly afterwards:

[March 17, 1852] A number of Indians arrived from the End of the Lake [Kamloops Lake] starving they inform me that several of their friends have died of starvation a few days back  they Came to Camp hereabouts with the Expectation that we will assist them in Provisions from our small stock of salmon

John Tod would have assisted them with provisions as far as he could, and Donald McLean would have, too. But Paul Fraser seemed unwilling to do that: it is hard to know how much of this is his character, or the difficulty of being able to provide provisions when they, themselves, had so little. One gets the impression that it is Fraser’s personality.

There are no Kamloops journals between May 17, 1852 and September 1, 1854. On Monday, October 2nd, Fraser noted that “The Indian Curbo off to the Upper Lake.” The Upper Lake seems to be Adam’s Lake, north of Little Shuswap Lake.

[November 19, 1854] An Indian also arrived from the Upper Lake who reports that Adam with his followers will visit the Establishment in 10 days.

Spintlum turned up at the Post: “[January 15, 1855] Also Splintlum with some Couteaux.” An Native arrived with dispatches from Victoria on January 14th. This is probably Pahallak, as on January 17th, Fraser wrote, “Pahulluck of to Langley  by him wrote to Messrs Douglas & Yale.” I wrote about Pahallak, here: http://nancymargueriteanderson.com/pahallak/

This is  clear indication that these Native men walked (or rode) over the brigade trail to Fort Hope carrying letters for the HBC, even in mid-winter. A few days later Fraser wrote that:

February 11, 1855] The Indian Pickatee with his sons arrived from the Similkm [Similkameen] they had only 3 Martins 1 fisher & 4 Small wolves to trade…

[February 12, 1855] Arrived Spintlum the Couteaux Chief who I sent for to Convey Mr Mansons Letter to Langley  Commenced making our Packs…

[February 14, 1855] Dispatched [Oliver] Lafertie with Spintlum to Langley to Convay hither some Articles required for the trade…

[February 20, 1855] Blowing strong. Mull a Plot with his 2 sons arrived from the Moutn [Mountain] Starving  they have been at the upper Lake to trade Salmon but Could not procure any…

[February 24, 1855] The Indian Chilpuckin off to Fraser River to trade Salmon the Indians in fact are starving here abouts…

Now, I am very interested in identifying the man, below. The trail he is exploring is probably a different trail than any of you will consider, and I am not telling you how it was supposed to lead the brigades to Fort Langley. It was partially built, but never used.

[March 1, 1855] An Indian arrived from Neckilush [Nicola] Lake who traded an Otter & 20 Rats [muskrats]  his Father is to Explore the Route from the Similkamil to the Fishry on Frasers River, and will proceed on to Langley. Gave him 1 foot Tobacco 20 Ball & powder with 1 Yd B…

The 1855 Brigade arrived at Kamloops from Fort Alexandria to the north, and so did Spintlum, who carried bad news:

April 26, 1855] Arrived Spintlum from the Similkam [Similkameen] who reports of there being much snow in the Mountains

As the brigade left Kamloops in 1855, Fraser listed the Natives who accompanied them and who worked in the brigade. They were: Grabbnol, Hopitol, Little Hunter, Saparial, Michel, Sansable, Chamobeau. Fraser never returned home but died on the trail. His story is here: http://nancymargueriteanderson.com/paul-fraser/

I’ve run across Courtepatte somewhere, and I don’t remember where. Maybe A. C. Anderson wrote about him. Spintlum is better known. He was chief of one of the largest Native villages in this territory, at the junction of the Thompson River with the Fraser, near where Lytton is today. In 1858, James Douglas went up the Fraser River to see what was happening in the gold-mines there. On Monday May 31st, he met See-a-meeah who was Chief at Fort Hope. A few days later he met Coss-a-balts, chief of Spuzzum; Tell-tella, chief of the Falls; and LoyKoo-tum, nephew of the Spokun [?]. I think they are near Fort Yale, and Spuzzum is, of course, at the north end of Douglas’s portage. On July 14th Douglas wrote:

Douglas returned to Fort Hope, where, on July 5th he saw Spintlum again:

Saw Spintlum, chief of the Forks. Made him a present and gave him a charge concerning the treatment of miners visiting his country. Reported to be a treacherous Indian, but it is prudent to pursue a conciliatory policy at present.

In 1860, Douglas traveled to what was then Princeton, and met an old Indian in the Nicola Valley he called Youss-sheetza, who wore a red coat. I always wondered if this was Blackeye? But how do you know, with all the different spellings and pronunciation? In addition, all of these sources have been transcribed, and who knows what errors were made in that process? From a Thomas Lowe transcription I got that as they came downriver they saw “Sargeant John.” When I read the original on microfilm, I knew Lowe had seen Serpent Jaune: this was the HBC name for Peu-peu-mox-mox, the Walla Walla Chief. That changed the story somewhat. [Source of the James Douglas mentions above: James Douglas Private Papers, B/20/1858, BCA]