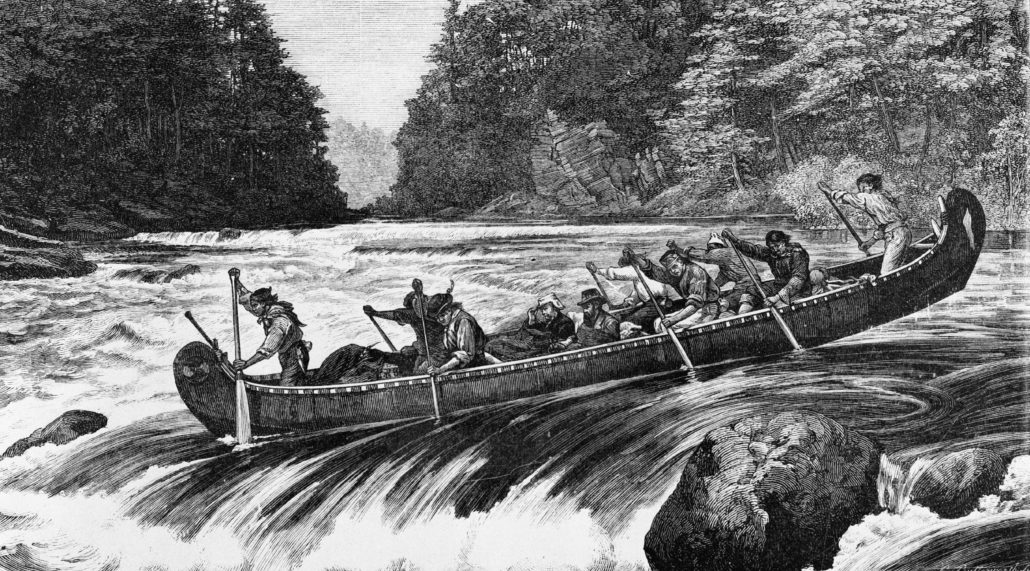 So, in 1846, James Birnie retired, a disappointed man, after 28 years of working in the fur trade of the North West Company and the Hudson’s Bay Company. How did he get here? He came direct from Scotland to the Columbia: what drew him to this business?

His family came originally from Rathen, a parish in the District of Deer, county of Aberdeen. Rathen was four miles from Fraserburgh and contains the villages of Cairnbulg, Charleston, and Inverallochy. Very little of its history is known, according to A Topographical Dictionary of Scotland, volume II, by Samuel Lewis, an old book [printed about 1850] that was reprinted in 1989. The parish is bounded on the north side by the bay of Fraserburgh, and to the east by the German Ocean [North Sea], along which is extends a distance of two miles. It’s a small parish, only seven miles long.

So, that’s where the old Birnie family came from, but our Birnie family had moved on to Old Machar, part of Aberdeen City, some years before. The first Birnie I found in Aberdeen was a James Birnie, born about 1715 in Old Machar, Aberdeen City, and death not known to me. He, or another James Birnie, wed Isabel Moir in Old Machar on February 9, 1762. James Birnie Sr., was a shoemaker in Aberdeen, who “signified his purpose of marriage with Isabel Moir in Old Aberdeen & consigned pledges. Conveneer Volum [?] being cautioner for both parties. Their purpose of marriage was orderly proclaimed and they were married upon the ninth day of February by Mr. George Farquhar.” This information comes from Scotland’s People, along with this: “James Birnie, shoemaker in Old Aberdeen, and Elspet Johnston his spouse, had a son named James, baptized by Mr. William Murray, Episcopal Minister in Old Aberdeen; witness James Birnie, elder, shoemaker in Spittal, and John Knight, merchant in Old Aberdeen.”

Is this James Birnie in our family? I don’t know anymore, and the dates do not seem to fit our story. But he is part of the extended family: I have a Robert Birnie, a leather merchant, who died March 13, 1829 and is buried in the churchyard of Old Machar. Here’s another: James Birnie, born 1720, in Aberdeen, Scotland, who married Isabel Grant. He was born February 7, 1744, in Old Machar, Aberdeen City, his parents being James Birnie and Elspet Johnston. He wed Isabel Grant in 1762, and he died in Aberdeen on a date that is so far unknown to me.

His son (or another Birnie’s son) was the third Birnie I have in my records — Robert Birnie, born December 28, 1765, in the City of Aberdeen, his parents supposedly being James Birnie and Isabel Grant (Moir). This man we know is in our family. Robert grew up to wed Elizabeth Dyce, and my g.g.grandfather James Birnie was his fourth son and fourth child. Robert Birnie was was a leather tanner. He died in Old Machar, Aberdeen City, March 13, 1829.

Whenever I looked at a Birnie man while searching Scotland’s People, I discovered they worked in leather, or tanning, or shoe-making. Some of the Birnies in Aberdeen were leather merchants, and it is likely that all these Birnie’s were related. James Birnie’s uncle was, supposedly, Sir Richard Birnie, who was born in Scotland in 1760. He apprenticed as a saddler and moved to London, where he found work with a company that supplied equipment to the royal family. This young man was very ambitious, and so impressed the owner of the company that he was made a partner. He met and married the daughter of a wealthy London merchant, and had a coat of arms that our James Birnie used at Cathlamet, Washington. Whether this story is true or not, or whether two people’s histories have been confused, I do not know — its been such a long time since I researched this family.

But I do know that our James Birnie was baptized at St. Nicholas Church, in Aberdeen City, on December 18, 1796. (Some of my older records say he was born in Rathen, but he was not.) I have a copy of his registration of Birth, and this is what it says:

Extract of Entries in an Old Parochial Register: Proclamation of Banns of Marriages dated 18th December 1796. (That’s what it says) Scotland’s People.

James Birnie’s father was a tanner. Young James would probably have gone to school when he was old enough, but he was not particularly well educated although he could certainly read and write. Almost certainly, he would have joined his father in the leather tanning industry — and that leads me to the next section of this post — how did James Birnie join the fur trade of the North West Company?

Anyway, Birnie sailed for Lachine in 1818. I found this information in Donald Whyte’s book, A Dictionary of Scottish Emigrants to Canada before Confederation [Toronto: Ontario Genealogical Society, c2008], volume 2. Whyte was researching the records in Scotland, not in Canada. This is what he reports:

So James Birnie sailed to Lachine in 1818. Those historians who live in Cathlamet and nearby tell us that when James Birnie was on the ship that carried him to North America, he and his friends sang a song called “Cheer, Boys, Cheer.” The words of the song was found in the handwriting of James Birnie, and it was the farewell song that Birnie and many others sang as they left England for America:

Courage! true hearts shall bear us on our way;

Hope points before, and shows a bright tomorrow,

Let us forget the darkness of today.

Farewell, England, as much as we love thee,

Let us dry the tears that we have shed before,

Why should we weep to sail in search of fortune?

Cheer, boys, cheer for the new and happy land.

Donald McKenzie was setting up his Boise camp in 1818. When Birnie’s ship sailed into Lachine, Birnie had no time to do more than clamber into a birchbark canoe and journey straight across the continent to the Columbia River. He would have arrived in the district in October, and he could have disembarked at either Spokane House, or Donald McKenzie’s newly built post, Fort Nez Perces. Birnie arrived too late to be among the first of the trappers to reach the Boise River camp, but by the time McKenzie’s assistant, William Kittson, reached the camp in May 1819, he found Birnie already there. This is what William Kittson says:

The defile we are now in [on Sat. March 26, 1824] is the same where I passed the winter with my much esteemed friend and Bourgeois Mr. Donald McKenzie, who that time headed the Snake Trappers amounting to 22 in number, besides this he had Messrs. James Birnie and [Jaco] Finlay and twelve engaged men, Total 38 in all.

Birnie wasn’t a trapper — he was there to prepare the furs that the trappers brought in, for market. That left the trappers free to do their work, and it also guaranteed that the furs reached the markets in good enough condition to get good prices. His skills in preparing and treating leather was exactly why he, and possibly others, were employed to work in the Boise camp and other places that the North West Company men had established. That was why he joined the North West Company.

Another interesting part of this story is that, in spring 1820, Birnie accompanied the men who delivered the beaver pelts to the company’s headquarters at Fort George (Astoria). With Birnie traveled the fourteen-year old daughter of an ex-North West Company employee named Beaulieu. At Fort George, the gentleman in charge of the district, James Keith, married Birnie to Charlot Beaulieu. So, almost certainly, the free-trader Joseph Beaulieu was also working in Donald McKenzie’s camp, alongside his long time friend, Jaco Finlay.

I also believe that both Jaco Finlay and Joseph Beaulieu were hired as Donald McKenzie paddled up the Athabasca River and through the Jasper valley, where many free-traders than lived. Jaco Finlay is certainly known to have resided there, and some of his family never left. Jasper’s Valley was a haven for the free-traders, who could bring their furs down to the HBC’s Edmonton House (and Jaco Finlay is known to have visited that post).

So there you go. This is why James Birnie ended up working in the fur trade of the North West Company, and later of the Hudson’s Bay. This is also how James Birnie met and wed Charlot, his very young Métis wife.

To return to the beginning of this thread and Birnie’s time at Spokane House, go here: http://nancymargueriteanderson.com/birnie-one/

When we return to the next post in our James Birnie thread, it will be here: http://nancymargueriteanderson.com/fifteen/

3 thoughts on “A Look-Back at James Birnie’s life”