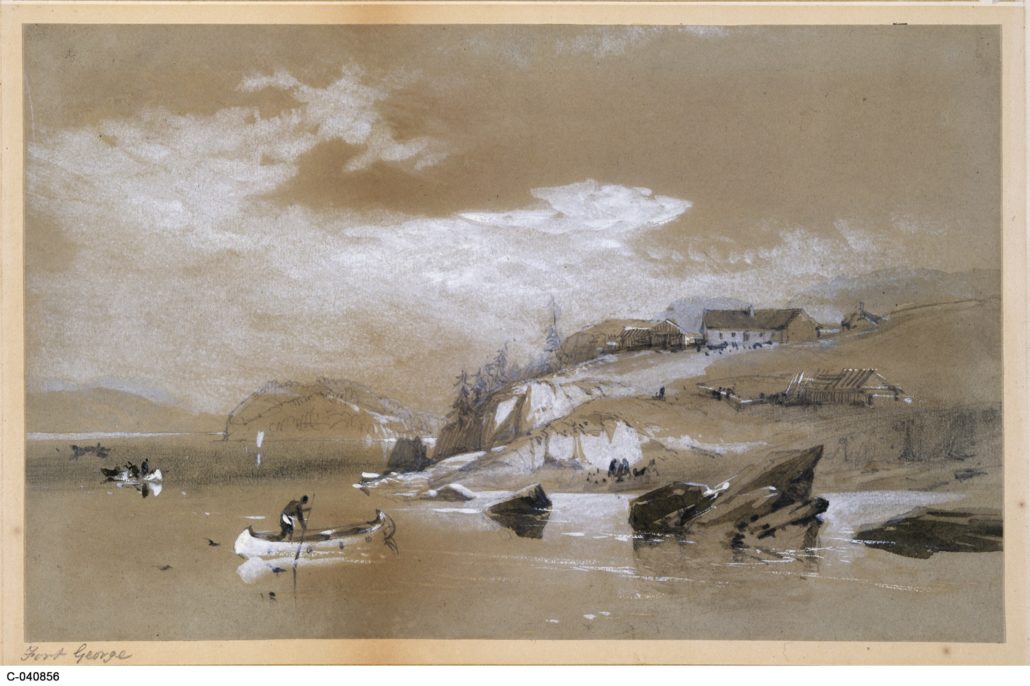 Fort George [Astoria] where Charlot Beaulieu, daughter of Joseph Hudon dit Beaulieu and wife of James Birnie, spent many years. Image from Library and Archives Canada, number C-040856, and used with their permission.

As many of you know, I am descended from Joseph Beaulieu, who crossed the Rocky Mountains in 1807 with David Thompson.

My DNA test tells me that he is a member of the Hudon dit Beaulieu family of Quebec — a massive French and Canadien family, many of whom entered the fur trade of the various companies over the years. It is amazing to have finally discovered where my ancestors came from, and whose family he belongs to.

I do not know for sure whether Joseph was Canadien, or Métis. I believe he was Canadien — my DNA says I have 2% French blood, and 2% First Nations. We know from family stories, and from the Hudson’s Bay Record Society biographies of my g.g.grandfather James Birnie, that Beaulieu’s wife was Cree. We also know, from family stories, that his other daughter was Josephine Beaulieu, who wed Joseph Louis Rondeau and ended up in St. Paul, Minnesota. We also know that Joseph Hudon dit Beaulieu must have left the Kootenais district, where he was a freetrader, returning to the Red River Colony or Montreal via the Athabasca, as his younger daughter Josephine can only have met her future husband in the Athabasca district or at Edmonton House. We have many DNA connections to descendants of the Rondeaus, and so we know that story is true.

Other DNA connections are very interesting indeed! We connect to descendants of Sam Gonzaga, a descendant of the American Indian family of Gonzagas. Sam Gonzaga came north to Cranbrook, B.C., and died there. The members of the family to whom I speak know very little about where Sam Gonzaga came from. We Beaulieu descendants will probably never know how we are connected to the American Indian Gonzagas, as there were no missionaries in the Columbia district before the 1840s: it is likely that one of Joseph Beaulieu’s children took a wife or husband from the First Nations people who lived in the area around Spokane House or elsewhere, and who grew their family.

The other possibility is that Joseph impregnated a Kootenay woman who travelled across the mountains with David Thompson’s party, rejoining her family somewhere west of the Rocky Mountains.

Many of us who are fur trade descendants will never know who are First Nations ancestors were. The same might be true of tracing our Métis ancestors’ history, or our French history. Fortunately, in the case of the latter hunt, I am lucky to have access to a history of the family that is stored in a French archives! In fact, in the thread that follows this post, I will tell you the story of the Hudon dit Beaulieu family of Quebec and their beginnings in France. I am fascinated, and amused, to discover that my mother, sister, and I, all of whom are descended from Hudon dit Beaulieu — a grain miller and baker in France — owned businesses that were originally delis and bakeries! It is truly a family business.

So in this thread I will eventually post a bit of French history that will be important to many descendants of Canadiens in Quebec, especially those who came from Anjou in the 1660s, as my ancestor did.

But for those of you who are looking for your Indigenous ancestors who came from the west side of the Rocky Mountains, there is another important resource for you. Those historians that write about the fur trade history in Washington State, and those who call themselves Métis in Washington State, are “organizing a conference on French Canadian/Francophone/Métis history in the Pacific Northwest,” to be held at Whitman College in Walla Walla, Washington, in June 2020. “It will be an international conference, open to all persons interested in the history of French-speaking peoples and associated tribes in the northwest.”

They call this conference the Francophone Northwest History Conference, and their website is at http://www.frenchnorthamerica.com/ The conference is open to both academics and non-academics, and everyone who has connections to the First Nations and Métis or Francophone people in this district can participate. There are table meetings, there are talks, there are genealogists, there are formal presentations, and there are tours to historic places nearby.

I intend to be there, with information about the Hudson’s Bay Company transportation systems, including the York Factory Express. If I have time, I can talk about the Brigades as well, but I really don’t know yet how much information I can cram into a twenty minute presentation. I will also be there to hear other persons’ stories. I hope to find more stories to research, and to write. I hope to meet some of the people with whom I already share information. I hope also to find members of the Gonzaga family, so that we can explore how our families might be connected.

Conference prices seem very reasonable, with estimated registration fee set at $100 U.S, and campus housing used for attendees (as far as I can see, for me the most expensive item is the airfare down to Walla Walla and back). As they say, everyone is welcome — it is an international conference and so people who live in British Columbia and elsewhere are encouraged to attend and to present. I hope that many of us do take advantage of this opportunity to share our stories, and to learn more of our history!!!

So, back to the Hudon dit Beaulieu family: This is the first post in a series that will be about the Hudon dit Beaulieus in France, and in early Quebec. I will have information about baptisms, god-parents, and arranged marriages in the French community. It is all very interesting, and all of this tradition, that is found in France, carries on in Quebec, and in the west side of the Rocky Mountains where many Francophone people.

When I write the next post in this series, it will appear here — http://nancymargueriteanderson.com/hudon-dit-beaulieu-1/

But this series, like others, will have to wait a while, until I write the biographies of some of the men I met in the York Factory Express stories. Fascinating men — some French, some Scotsmen, some Métis, some Iroquois! There were many different people in the west, and many different stories. Enjoy the differences! It will be fun.

8 thoughts on “We are still Here: the Métis in the West”