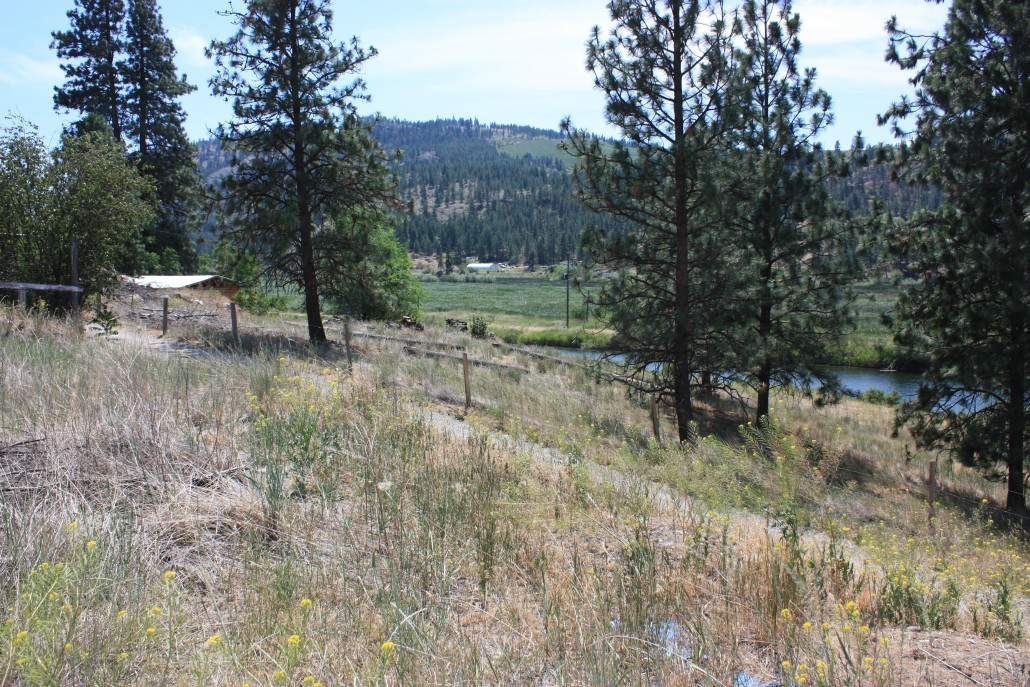 The area around Skaha Lake, where Henry Digby Shuttleworth may have lived. Shuttleworth Creek is close to this place.

In the Thirty-Sixth Report of the Okanagan Historical Society’s Annual Report, I found this short little notice re: Henry Shuttleworth. It said:

He [Donald Walker] served with the H.B.C. mostly in New Caledonia for a few years but decided to leave the service and return to Great Britain. He left Kamloops August 20, 1854 for Boat Encampment where he was due to meet the brigade [York Factory Express] from Colvile. When the canoe arrived “I saw,” he stated, “Angus McDonald and Henry Shuttleworth, the rest of the crew were Canadian Indians.”

In the BC directly 1882, Henry Shuttleworth is listed as mail carrier in Hope and in 1885 and 1887 editions as “packer to the Similkameen.” — Editor.

Well, as it happens, I know quite a bit about Henry Digby Shuttleworth, as he is a character in my Brigades book, “That Infernal Trail.” He was at Fort Vancouver by the end of 1852 and perhaps even earlier. He took out the York Factory Express in March, 1854, and had a rough time of it, but I am not going to tell that story here! It is enough to say that Shuttleworth returned to Fort Colvile with the incoming spring express of 1855. His story here begins after that late return.

In October 1854, Dugald McTavish, who was in charge at Fort Vancouver, noted that: “Mr. Shuttleworth arrived from [Fort] Colvile on the 25th Ulto [September] with letters from Mr. [Angus] McDonald advising me that but few miners were at work on the Pend Oreille [sic] who were doing very little.” Only a few weeks later a massive Indian war broke out that involved the entire territory. This was the Yakima War of 1855-56, and the Columbia River was no longer save for travel, even for the HBC men.

Fort Vancouver could not longer contact Fort Colvile, but Fort Victoria could, via the brigade trail. James Douglas has sent Andre Balthasar and his men over the Cowuihalla brigade trail to build the new Fort Shepherd, and these men carried letters to McDonald.

I have lately received a communication from Chief Factor Mactavish declaring his inability, in consequence of the disturbed state of the country, of communicating with Fort Colvile, otherwise it was his intention to dispatch Mr. Shuttleworth, who made his way safely to Fort Vancouver, with instructions to you that the Colvile Furs and other returns should be brought this season to Fort Langley.

Douglas’s letter was written in April 1856. Shuttleworth had returned safely to Fort Colvile in 1855, and once again came out to Fort Vancouver in March 1856. McTavish wrote:

Mr. Shuttleworth arrived here from Colvile on the 15th inst. [March] bearer of the accounts of that district… Mr. [Angus] McDonald is now much in want of supplies of all kinds, but owing to the existing troubles with the Indians, we cannot with safety send anything from this Depot… Mr Shuttleworth will leave on his return in a few days, it was not my intention to have despatched him so soon, but the Spokan Indians who escorted him on his way down, through the hostile tribes, are desirous to get home again, and as they would run some risk going alone, among the Soldiers and Volunteers now in the upper country, it is necessary they should be protected, and for that reason Mr. Shuttleworth will accompany them and I trust get through safely.

It is interesting that young Shuttleworth’s presence would provide protection for the Spokane guides from the considerable wrath of the American Volunteer Armies, while the Spokanes would protect Shuttleworth from the rampaging Yakima tribes.

In 1856, Shuttleworth brought out the Colvile brigades to Fort Langley. James Douglas said, in May, that “Mr. Shuttleworth arrived here safely with the Brigade [from Fort Colvile] and delivered the furs in good condition.” It is important to remember that the Fort Colvile men had not traveled over the mountains to Fort Langley since 1850, when Alexander Caulfield Anderson brought his men out that way. Shuttleworth was unfamiliar with the route. Though young and inexperienced, he had been placed in charge of this brigade. The letter continues:

The outfit is now packed and far exceeds his means of transport. It appears by his statement that he has in all 159 horses, of these he reports — 15 unfit for loads; 29 required as riding horses for the trip men; 44 required for their goods at 1/2 load per man, making in all 58, and leaving only 101 horses for the transport of supplies. Mr. Shuttleworth will proceed with as many loads as he can now take on, with the means at his disposal, and the remainder of the Goods will be deposited at Fort Hope, in charge of Mr. Ogilvy, who will remain there until you send for him…

Mr. Shuttleworth performed this journey to Fort Hope in 14 days of very slow travelling and the trip under ordinary circumstances to and from Colvile and Fort Hope may always be performed within the month without distressing the horses… The selection of the Outfit to be taken in now, will be left in a good measure to Mr. Shuttleworth, who appears intelligent and extremely attentive to his duty… [Douglas to McDonald, July 7 1856, B.226/b/12, HBCA]

John Simpson [brother of George Simpson] accompanied Shuttleworth’s brigade to Fort Colvile brigade that year, on his way out of the territory. It must be noted that Simpson was already known to be an inefficient trader who had his share of trouble with the Natives. In late August, James Douglas reported that the Fort Shepherd work party under Andre Balthasar had passed Shuttleworth’s incoming brigade, as Balthasar’s party made their way back to Fort Victoria from Fort Colvile. Douglas said: “The ingoing Brigade appears to be making very slow progress towards Colvile, as they were met some distance from the mouth of the Shimilcommen [Similkameen] River, by Balthasar’s party. So large a brigade as that of Colvile requires an experienced manager.” On the first of August, Angus McDonald met the incoming Brigade near the mouth of the Similkameen. The horses were apparently in good condition, and they expected to reach Fort Colvile in about seven days.

However, in September 1856, Dugald McTavish reported to Governor Simpson that Shuttleworth had lost fifty horses on the trip. In late September, a frothing-at-the-mouth James Douglas wrote to Donald McLean of Kamloops:

There appears to have been a fearful loss among the Colvile transport horses. I trust you will do everything to save those which have been left in your vicinity, and send any of them to Fort Langley as you may judge expedient. The summer arrangements at Fort Colvile appear to have been defective. McDonald is evidently not the man for the place, and I am of opinion, that we will ere long have to appoint you to the charge of that district.

McLean didn’t want to go to Fort Colvile. Douglas complained to everyone around of this disaster until he was informed by Dugald McTavish that Angus McDonald could not have come out with the brigade, as he was required at Fort Colvile. But McDonald soon became sick, and George Blenkinsop was sent in to Fort Colvile to take his place. Angus McDonald arrived at Fort Vancouver in March 1857. In December 1857, Shuttleworth popped up in a correspondence between Dugald McTavish and Governor Simpson:

Bye the bye, what is to be said or done about young Shuttleworth — he entered into a new agreement at Colvile for three years last spring, and went out to Langley — was appointed by [James] Douglas to New Caledonia, but somehow the youngster took it into his head not to go there, and quietly returned to Colvile, and has since been living among the Indians somewhere on the river between that place and Okanagan. I suspect he is weak in the upper story.

This will be when Shuttleworth lives near Skaha Lake, I suspect. The stories conflict a little: James Grahame, second in command at Fort Vancouver, reported to Governor Simpson in March 1857, that “Mr. Shuttleworth having some misunderstanding with Mr. McDonald on account of the latter ordering him to report himself at Vancouver, as his services were no longer required in the Colvile district, left the Fort about the middle of last month [in February] and is now living among the natives.” It does not seem that Shuttleworth’s argument was with McDonald, but more likely with Douglas, who wanted to send him into New Caledonia.

Shuttleworth eventually capitulated and re-entered the service. In June 1857, Douglas wrote, “If Mr. Shuttleworth re-enters the service we shall give him a turn to New Caledonia.” Shuttleworth came out with the Fort Colvile brigades that year. James Murray Yale of Fort Langley had orders to “let Shuttleworth accompany him [Angus McDonald] to Fort Hope, to return from thence [to Fort Langley] with the Boats and furs.” It seems Shuttleworth ended up at Kamloops.

This is what Bruce McIntyre Watson has to say of Shuttleworth, in his Lives Lived West of the Divide:

Son of a colonial indigo planter and baptised in Calcutta, Henry Hardinge Digby Shuttleworth joined the HBC on May 31, 1852, in London, England. He served his first year as an apprentice clerk in the Northern Department and then came west of the Rockies. Under HBC employ he accumulated a large debt from unexplained spending habits….  On May 22, 1859, Shuttleworth turned up at Thompson River, re-entering the service, but parted ways within a year at Fort Alexandria after the birth of a son. Clerk Shuttleworth then turned his talents to raising stock and running the mails by packtrains. By 1872 he was running mail from Penticton to the boundary and, in 1875, he was raising stock in the Similkameen Valley. In 1877 he pre-empted land at Keremeos and in the 1880’s he was carrying mail over the Hope-Princeton trail. In 1896 he was a rancher at Courtenay Lake, Nicola. He died at Royal Columbia Hospital, New Westminster, of influenza and pneumonia.

He was an interesting young man, I think. He has a good story, anyway.