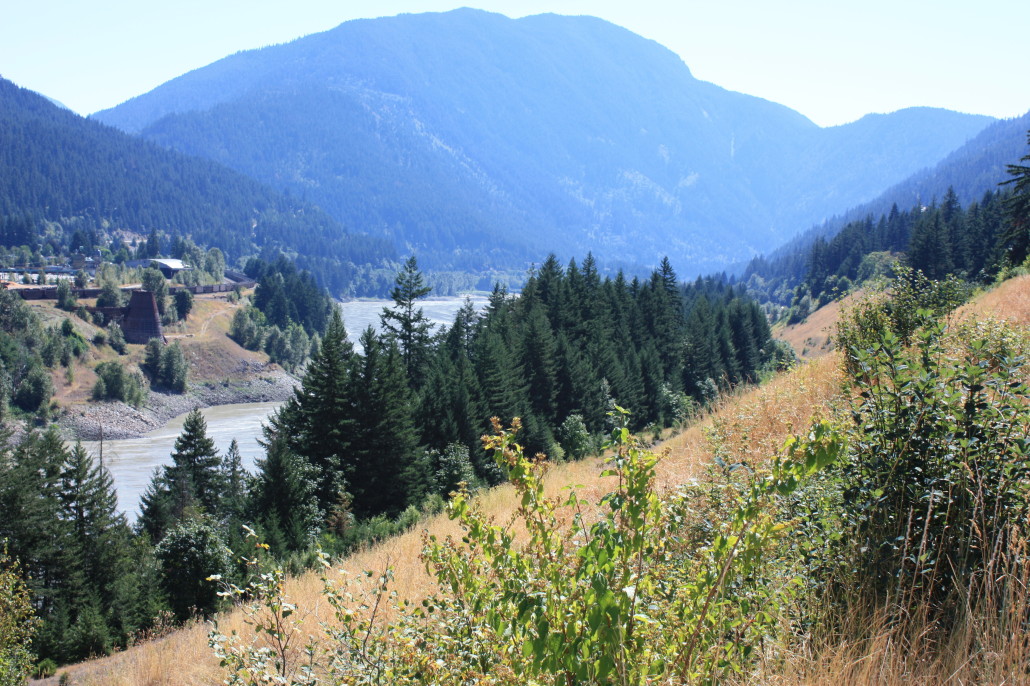 This is the Fraser River at Boston Bar, looking across the river (from the west side) toward Lake Mountain

I left my last blogpost at the place where George Simpson, son of Governor George Simpson of the HBC, was being “assigned the difficult work of hauling freight up the Fraser River,” to the Thompson.

In the end, this is how James Douglas thought his river transport would work:

We have now finally resolved on building a small trading Post near the point where the Thompson united with Fraser River, and endeavouring [sic] to open water communication to it by Fraser’s River for the transportation of Goods, and though the difficulties be great, and the River dangerous, as well as being altogether impassable during the summer freshets, yet we hope and shall strive to succeed.

As part of the machinery for that purpose I may here inform you that two lines of River Craft will be required, one to be used between Thompson’s River, and the upper end of the Falls of Fraser’s River [at Boston Bar], and the other to ply between Fort Langley and the lower end of the same Falls [Alexandra Bridge]; the intermediate distance between these points [Hell’s Gate Canyon] being about 13 miles, over which the goods will have to pass by land [over Lake Mountain], and it will be further necessary to build a small fort at the lower end of the Portage for storing the goods while in transit. (45)

The first boats left Fort Langley in mid-February, 1858. (46) According to Douglas, “Mr. Simpson’s transport party experienced some difficulty above the Falls, and lost two canoes which were dashed to pieces on the rocks, but the property was all saved and no lives were lost.” (47) He made a second successful delivery, “having delivered the property in his charge about 70 pieces of Trade Goods, into the hand of Chief Trader [Donald] McLean, who came to that point, with horses, to meet the transport party from Langley.” However, Douglas reported, “The river is now on the rise, and we will in consequence have to abandon that route for the present and carry on the summer transport by the Fort Hope road.” (48)

In late 1857, James Douglas had written a Proclamation which declared the rights of the crown to all gold found in its natural place of deposit. (49) Then, Douglas said:

As it is particularly desirable to place a legal check on the movements of American citizens and to prevent them from entering the British territory, either for mining or for other purposes, I propose having the Proclamation and the Licence regulations now issued published in the Oregon and Washington Territory Weekly Journals, so that the laws regulating and legalizing the search for gold may be generally known and that American citizens may not have the excuse of ignorance to plead, in extenuation of breaches of the Law. (50)

In February 1858, his proclamation was published in the Olympia newspaper, and would soon appear in the Oregon papers. (51) By April, some 70 or 80 adventurers had “gone by way of Fraser River to the Couteau mines, without taking out Licenses.” (52) In mid-April ships stood empty in Washington and Oregon, because of the “universal desire among the laboring classes to see the gold district of Thompson’s River, many persons having already gone thither and several ships in Puget’s Sound having been deserted by their whole crews…” (54) Alexander Caulfield Anderson, who lived at Cathlamet on the Columbia River west of Fort Vancouver, was inundated with requests for information on how to reach the Thompson’s River goldfields. (54) He wrote his Handbook and Map to the Gold Regions of Frazer’s and Thompson’s River and had it published in San Francisco. Finally, on May 8, 1858, James Douglas informed British Secretary of State Henry Labouchere that “on the 25th of last month [April] the American Steamer Commodore, arrived in this Port, direct from San Francisco, with 450 passengers on board, the chief part of whom are gold miners, for the “Couteau” country.

“Nearly 400 of those men were landed at this place, and have since left in boats and canoes for Fraser’s River.” (55) The first boatload of San Francisco gold miners had arrived at Fort Victoria, and the gold rush has begun!

This is where my history ends. You who write about the gold rush (and there are many of you) will continue the story. I want to add on one quote, which I think completes the story:

Be this, however, as it may, one thing is evident, that Gold, under Province, has been the great instrument in the nineteenth Century for ameliorating the condition of the human race. Powerful communities have arisen where previously a lingering state of things prevailed. Commerce has been extended with marvelous strides. The power of England, maintained by commerce proportionately, has advanced. Colonies have become nations; but nations bound lup in affectionate sympathy with and reliance on the Mother Land. And to what is all this due? The casual observer may perhaps answer, to the mere chance discovery of Gold; but the philosophic mind will recognize in the chance discovery a deeper cause; and acknowledge that, retarded mysteriously until the world was fully prepared, an unseen Hand has finally revealed to human knowledge those latent treasures over which Man for ages had walked in ignorance. [Alexander Caulfield Anderson, “British Columbia,” pp. 3-4, draft unpublished manuscript, B.C.A.]

To start from the beginning of the essay, click here: http://nancymargueriteanderson.com/gold-rush-one/

When I have the endnotes in, they will appear here: http://nancymargueriteanderson.com/gold-rush-endnotes/