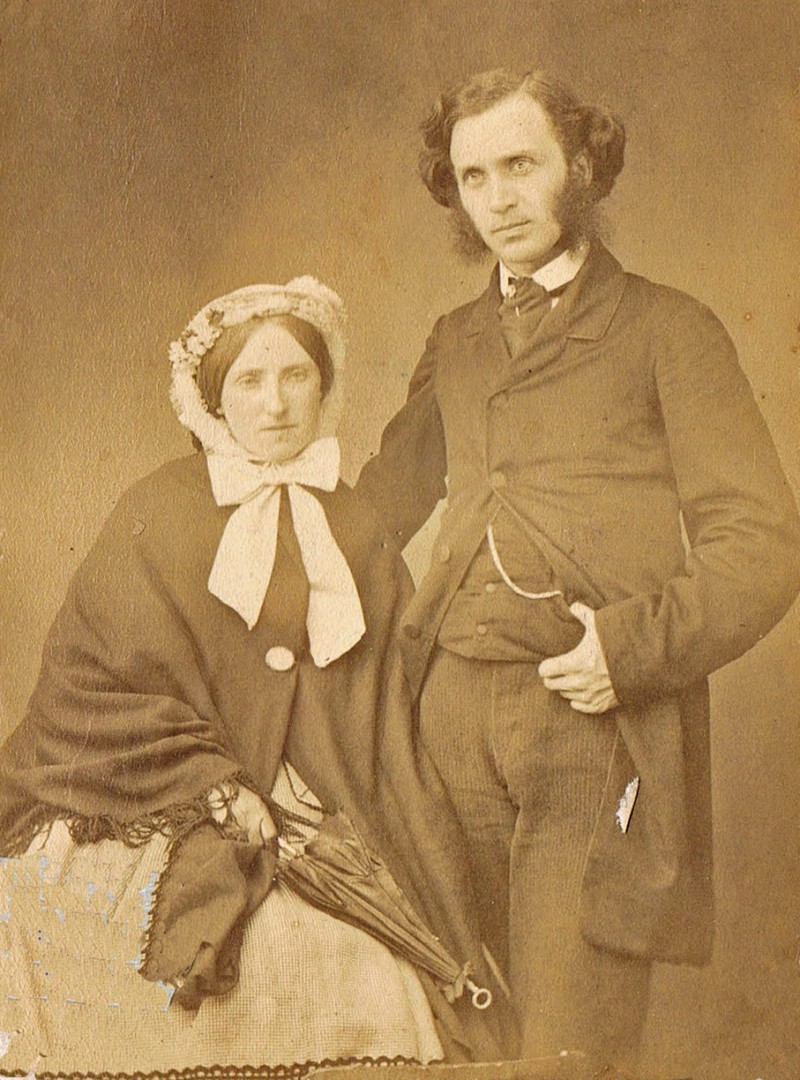 Unidentified Anderson-Seton descendants, though it is certainly not a photograph of George Anderson!

As we who do family history all know, there is always someone in the family tree who is an embarrassment. In truth we have several persons who fit that description, and George Anderson, younger brother of Alexander Caulfield Anderson, and James Anderson (A), is one of them.

Actually I quite enjoy George — I am not in the least embarrassed by him. He was a big kid who couldn’t do the work because he drank up the post’s alcohol supply, which made his employers very angry.

George Anderson was born in London in 1820, and was about twenty years old when his family moved to Canada to become farmers. According to his biographical sheet he was Apprentice clerk at the Quebec Depot in 1841-1842, and was later Apprentice Clerk at Fort Chimo, Ungava, in 1842. His journal is in the Hudson’s Bay Company Archives and is an enjoyable read: it covers his travel from the St. Lawrence River to Fort Chimo and beyond. He was later at North West River [Rigolet] on Esquimaux Bay, and from 1844-1849 was at Kaipokok [Aillikl], Esquimaux Bay.

So let’s tell his story in scraps of letters preserved in the Hudson’s Bay Company Archives!

William Nourse wrote to Governor Simpson in September 1843, that “Mr. George Anderson was left by Mr. McLean in charge of Fort Chimo — he has just arrived from that post with the people and property. The business there appears to have been well conducted by him and I have reason to think his services may be made useful this ensuing winter at Rigolet as successor to Mr. Verral.” [D.5/8, HBCA]

In 1844, George Anderson had been at Rigolet for a year already, according to Nourse’s September report: “Mr. George Anderson has been in charge of this post during past Outfit. He has good abilities if properly directed; and I hope to see some improvement. I am sorry I cannot give an unqualified character as far as regards this past Outfit — but as I notice a more strict regard to instructions, greater activity and attention to business since I was down here in July, I hope this will be taken into consideration. His contract expires next June.” [D.5/12, HBCA]

However, in September 1847, William Nourse reported to Governor Simpson:

After having recommended Mr. George Anderson last year in consequence of the improvement in his conduct and management, and after the pleasure I felt at being directed by you to renew his engagement at an advance of salary, I little expected to have the disagreeable task of reporting any thing unfavorable regarding him this year; but his conduct leaves me no choice. On my arrival here from North West River after seeing the inland boats off for winter quarters, I was made acquainted with sundry rumours regarding the affairs at Kibokok [Kaipokok], which if to be depended upon, could leave me doubt of very great mismanagement at that post. I was informed that the seal blubber had been kept in such a careless manner in the Oil stores that very great waste of Oil had taken place. This I was in hopes might prove erroneous or at least much exaggerated, as Mr. Anderson had just sent me an estimate of the quality of pale Oil he expected (say 4,000 gallons) and this was so near what might be expected… A few days afterwards the schooner arrived with a second cargo from Kibokok and then I was almost confirmed in the truth of these reports by the small quantity of pale Oil sent, and being informed by the crew that no more of that kind was to be expected (we had received in all at this time 2,140 gals Pale oil). Mr. Anderson sent a Bill of Lading but no letter, and as I had thus no explanation to account for the deficiency, I wrote to him to come here with the schooner on her last trip to explain a circumstance so extraordinary. He arrived two days ago; and the result is that I can get no explanation, he denies any carelessness causing waste — admits the deficiency ought not to have been but cannot account for it.  The whole produce, both pale and brown oil, is 3,170 gals., instead of over 4,000 gals., which he admits the number of seals caught (700) and his trade with Esquimaux (about 800 lbs. Blubber) ought to have yielded. It was said that the floor of the store at Eyokick [?], the principal fishing station, was so saturated with oil that it was standing in pools on the ground. This he denies but be this so or not it could be no common waste that would cause such a deficiency. [D.5/20, HBCA]

On the same day, Nourse wrote another letter to Governor Simpson, with further information. “Through some of the men, Mr. William Cameron was informed, that during last winter, Mr. Anderson had been frequently making too free a use of spirituous liquors, and this Mr. Cameron informed me of. But as Mr. Anderson denied this charge and I could not prove it, as I have stated, would not make it public until I had better proof….

I perceived yesterday evening that he had been drinking too much and that he must have procured it in some way unknown to me. I sent for him afterwards and he did not deny that he had been drinking Brandy and was but only a single glass. As it was improbable that this quantity could have had so much effect upon him, I made inquiry of Mr. Cameron and he informed me that Mr. Anderson, since his arrival from Kibokok, had continually been asking him for both Brandy and Wine and he very improperly furnished him with it, without my knowledge, from what was in the store here as the allowance of the Post at Kibokok, which had not yet been sent there… Mr. Anderson claimed it as his allowance and Mr. Cameron very improperly, I must say, gave it to him without informing me, to the extent of about two Bottles daily, which was drank either at night after I was in bed or carried on board the Marten and drank there… but yesterday it appears he had been drinking during the day. [D.5/20, HBCA]

Well, the ship Marten sailed for Quebec with the letters and George Anderson stayed behind: there were no more ships until spring. He was “employed this winter to the best advantage in my power,” Nourse said. There were more complaints about his work over the winter, it seems. Nourse said he “deviated from instructions — returning to the old Custom of allowing the men to help themselves to provisions instead of giving regular rations.” George’s storehouse was in chaos and he refused to fix it; his accounts were left unposted for more than a month; and there were many mistakes in the ledgers he kept. There was more. When he was faced with the problems, George denied them. He decided to retire from the service, rather than being dismissed, and sailed away from Rigolet on September 19th, 1848, according to a letter from Richard Hardisty. [D.5/11, HBCA].

It seems, however, that George was dissatisfied on the family farm at Georgina, Lake Simcoe. In January 1849, he tried, once again, to join the Hudson’s Bay Company:

Sir George Simpson; Sir, I had the honor to state to you my reasons for leaving the Company’s service when I sent in my resignation — since then the explanations I had the honor to give you at the interview I had with you at Lachine, have I hope convinced you that the circumstances through which I had the misfortune to incur censure at Esquimaux Bay were owing more to the untoward course of events than to my personal ill conduct. I therefore venture to express my wish to enter into the Company’s service again, if it is admissible; and if so I shall hope that my future conduct will be such as to efface any ill impressions which may now be against me. [D.5/24, HBCA]

Governor Simpson’s response was as expected, and perfect for the situation:

With reference to your return to the service, I am of opinion that, in consequence of the circumstances under which you quitted the employ, it is very doubtful that you can be reinstated; and under these circumstances would strongly recommend your seeking some other occupation, and on no account remain idle on the chance of returning to the Company’s service. [D.4/70, and D.4/39, HBCA]

In 1849, Alexander Caulfield Anderson wrote from Fort Colvile, referring to his bother’s apparent misconduct, which he said was the “flagrant vice of intemperance.” In February 1848, James Anderson (A) wrote to Governor Simpson:

I was exceedingly distressed to hear that the conduct of my brother Geo: had been such as to render it necessary to insist on his retirement from the Service — my brother Alexander and myself have given him the best advice and I believe have not shewn him a bad example… and though it is humiliating to hear of his disgraceful behaviour, like other disagreeable things it must be endured patiently.

I know [William] Nourse intimately, he is an honorable tho’ crabbed little soul, and would not, I firmly believe, act with harshness towards any one. [D.5/21, HBCA]

An industrious young man and one who is willing to conform to circumstances is always sure to do well. I think one reason George had done so badly, for he ought to be independent by this time, is that he has such an aversion to work and stood too much on his gentility. In his last letter to me he said that he just made a living and that was all.

It is likely George was in Australia already: in fact, almost certain. He visited the California gold fields in 1848 or 1849, I presume, but moved on from there to Australia by 1877.  As his death certificate said he was a resident there for 57 years, he must have arrived soon after his visit to the California gold fields, which makes sense. I have no idea what he did in Australia, but he died of old age and “senile decay,” on the 19th of June, 1908, in Tibooburra, New South Wales.

Tibooburra! Tibooburra is a place of burning sun and red rocks, where miners lived in underground caves, digging for gold and opals — the name of the place means “lots of rocks.” (One family member who lives in Australia says “only the desperate go there.” Modern-day Tibooburra residents might feel differently, and if so, they can tell me.) It is desert, but very beautiful. The town was founded in the late 1800’s, because of the gold found there. If life at Tibooburra is described as “rough” today, it must have been extremely rough a century ago! The place is notorious for recording the highest daily temperatures and sometimes the lowest!

But George owned property at Tibooburra, or more likely had a lease on a piece of property that was not likely to have been productive — a full 20,000 acres but probably only good for sheep. He was 87 years old when he died. Amazingly, he outlived all his brothers and sisters, by decades!

Here is my theory. George couldn’t handle the cold and headed to California, and Australia, where he eventually lived in what seems to be the hottest place in the world! I almost sympathize with him: not that I would head for the heat, but I am not fond of the cold.