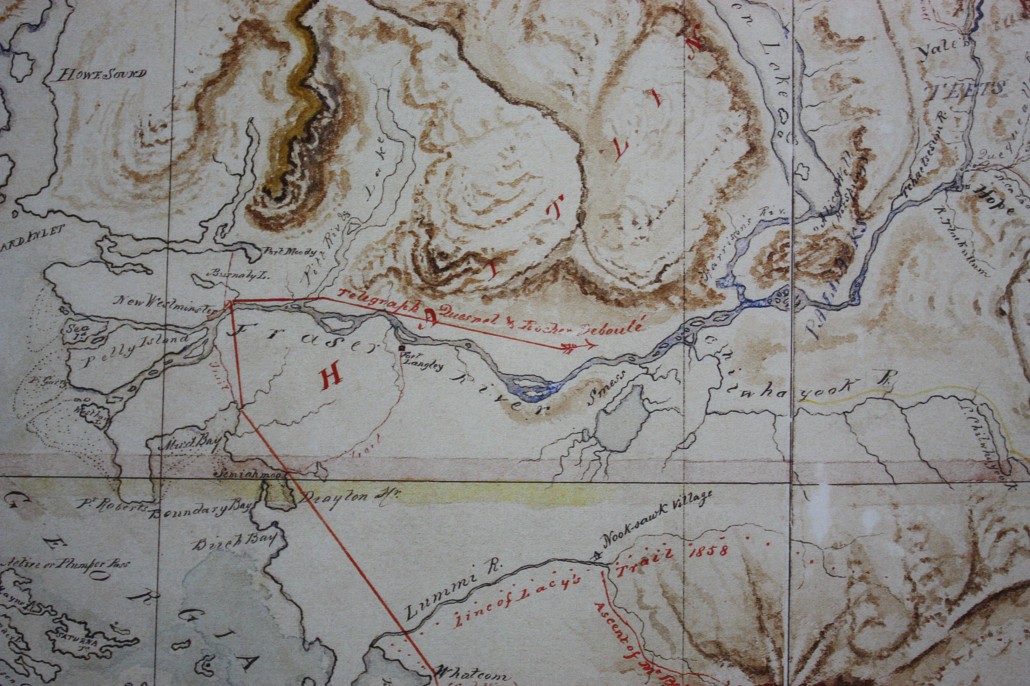 Portion of A.C.Anderson’s map of the Colony of British Columbia, 1867, CM/F9 courtesy of the Royal BC Museum, BC Archives. Detail from original map

This is part of Alexander Caulfield Anderson’s 1867 map of the Colony of British Columbia (CM/F9, BCA), that shows the section of Fraser’s River from its mouth to Fort Langley, Smess (Sumas) and Fort Hope. This is the Fraser River that the fur traders all knew and traveled. It is a very different river today.

If you look at the map carefully you will notice many interesting and historical facts: the route of the Collins Telegraph Trail is shown as it travels through the Fraser Valley north of the river. I have several family connections to this trail, and am still finding more.

At the mouth of the Harrison River  there was a Native village, mentioned by Anderson’s son James in his memoirs. A little below that, (downriver, I presume) was the Fort Langley salting station. When Anderson came downriver from where Fort Yale later stood, he wrote of his canoe journey south to Fort Langley:

At 11 we reached the Kequeqlla [Coquihalla] River, the spot whence I struck off last year; at 2.25 (having previously lost half an hour by stoppage), the salting station a short distance below the Lillooet Fork [Harrison River], and at 7 o’clock Fort Langley…

To the east of Harrison River is the Chilahayook [Chilliwack] River. East again, is the River Tschaetsesum, where Anderson’s Sto:lo guide, Pahallak, lived. My uncle, who in the 1960’s followed A.C. Anderson’s trails around British Columbia, identified the Tschaetsesum as either Mahood Creek, or Ruby Creek. Whether this was a summer (fishing) or permanent winter village I do not know. I only know that when Anderson’s exploring party paddled up the Fraser River in early June 1847, he camped “opposite to Pahallak’s village, a little below the River Tschaesesum.”

There is another name on the map which I recognize — the Whatcom Trail which carried American goldminers east into the goldfields of the upper Fraser River. As I drive up the Valley I recognize these old names, as I have run across them in my research. One road sign I often noticed was Sumas Prairie. I had no idea where its name came from.

Then, as I looked at the details of the Fraser River on Anderson’s map, I understood its origin. Take a look at the large lake in the middle of the map, and notice that the fur traders called this lake “Smess.”

That is what Sumas used to be. It is no longer.

“Smess” is a fur trade name, learned from the Natives who lived on what used to be the lake they called Smess.

The water was drained from this eleven-thousand-acre lake ninety years ago, by the Provincial government, when they created the place we now call Sumas Prairie.

But before the government interfered with Smess, the Natives made their homes along the lake’s shores, and in other places in the valley. When the mosquitoes came in June or July, the people moved into their summer homes built on stilts in the middle of their lake. They traveled everywhere in their canoes; they fished for sturgeon in the lake and hunted waterfowl.

“There were millions of ducks, geese,” an elder named Ray Silver said. “The fish would jump right into your canoe there was so many of them, jumping all the time.”

Ray Silver did not know the lake, but he heard these stories from his grandfather who had lived while the lake still belonged to the Natives. His grandfather told him of the sturgeon left behind when the lake was drained, and how they suffocated and died in the mud.

The Natives abandoned their emptied lake and lived elsewhere in their territory. Colonists moved in and ploughed the rich earth created by the lake, sometimes turning up fresh-water clams as they did so. Today “Smess” is filled with valuable dairy farms and agricultural land that produces thousands of pounds of fresh fruit and vegetables for market every year.

But its history has been drained away with the lake waters, and its original people have gone. Even its name was changed and forgotten.

If you want to learn more about Sumas Prairie and the lake that used to be there, the article I am getting the above information from appeared in the Vancouver Sun newspaper, April 26, 2013, and contains much more information than I am giving you here.

Smess was well known to the fur traders at Fort Langley, and there are many mentions of the place in James Murray Yale’s letters to and from James Douglas. I don’t know if Anderson ever saw Smess, and I think he did not. However Anderson paddled past the lake many times and had a good idea of its geography. Perhaps this was because, in 1847, his guide up the Fraser was Sto:lo chief Pahallak, who had his village at the mouth of the nearby River Tschae-tse-sum. It is likely that Pahallak was one of the Natives who spent part of the year living in one of the houses built on stilts, in the middle of “Smess.”

The map at the top of the page is taken from Alexander Caulfield Anderson’s 1867 Map of the Colony of British Columbia, CM/F9, BCA. I have used it with their permission. This column is part of the series of “Following A.C. Anderson around British Columbia.” The next is here: at http://nancymargueriteanderson.com/hope-slide/

Softcover copies of my first book, The Pathfinder: A.C. Anderson’s Journeys in the West, are available from me through my contact sheet.

My second book, “The York Factory Express,” is now available and you can order it from my publisher, here: http://ronsdalepress.com/york-factory-express-the/ It tells the story of the HBC men who journey to Hudson Bay and return every year, in the York Factory Express and the Saskatchewan Brigades.