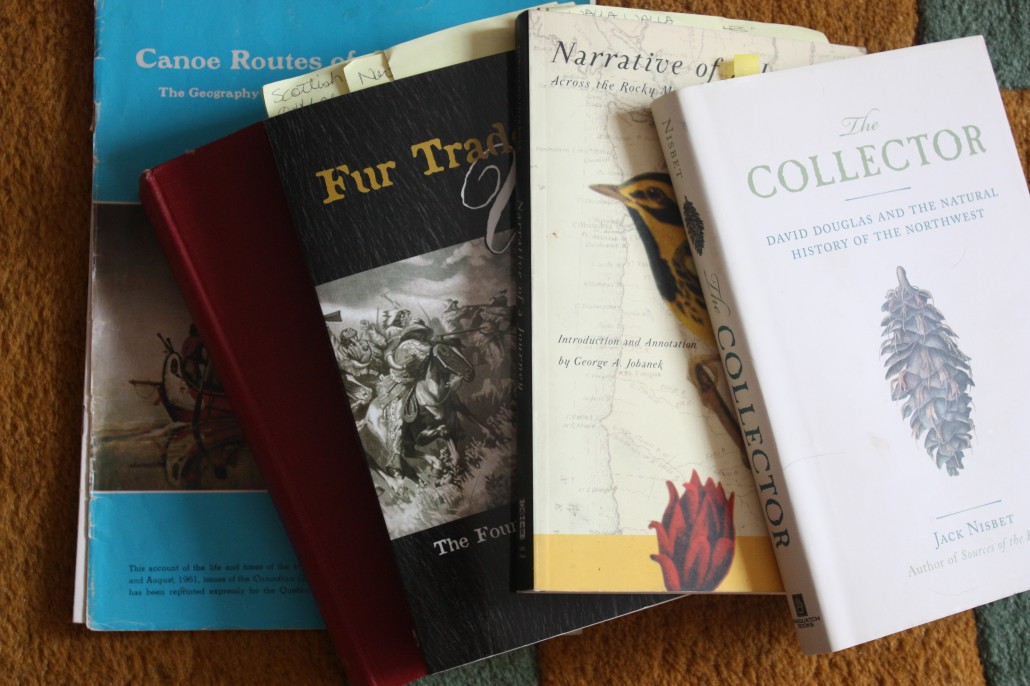 My second post on fur trade books to find and read might prove tougher to do. Many are quite old.

Here is my second post, with more books that might be considered essential fur trade reading. It is odd how this subject has hit a nerve, but I understand why. It is hard to find these books, and I am fortunate that I live in was used to be a second-hand-bookstore city. There’s a lot of history in this business, any many different stories are told all across this massive country.

For the most part these are books that will take you through the exciting history of the fur trade on the east side of the Rocky Mountains.

Here is one I need to read again, and all the way through. I discovered this book when I was researching a specific subject. Considering what I am writing about now, I think I need to re-read the entire volume:

The Five Fur Traders of the Northwest, being the Narrative of Peter Pond, and the Diaries of John Macdonnell, Archibald N. McLeod, Hugh Faries, and Thomas Connor, edited by Charles M. Gates and published by the Minnesota Historical Society, St. Paul, in 1965. This is an old book and you will probably only find it in your local library — if you are lucky enough to find it there!

J. M. (Jack) Bumsted’s Fur Trade Wars: The Founding of Western Canada [Winnipeg: Great Plains Publications, 1999] tells the story of the exciting years when the HBC, at York Factory and on the Saskatchewan River, and the NWC from Montreal, were battling it out for control of the fur trade on Lake Winnipeg and in the West — the “West” in this case being the prairies of Central Canada.

Eric W. Morse’s Canoe Routes of the Voyageurs: The Geography and Logistics of the Canadian Fur Trade, published expressly for the Quetico Foundation of Ontario and the Minnesota Historical Society. This is a re-publication of a series that appeared in the Canadian Geographical Journal of May, July, and August 1961. Its a small book, almost a magazine — and it will not be easy to find, so you might want to look for the Geographical Magazines in your local library or University Library. This book actually does cross the mountains to give a little information on the “Columbia District.”

Now, for books on the West side of the Mountains: I have found another book which I am quite enjoying. Derek Pethick was one of British Columbia’s first historians, and he has written a number of books I have not yet found. But I did discover this one: James Douglas, Servant of Two Empires, by Derek Pethick [Vancouver: Mitchell Press, 1969]. This last book kicked off my recent blogpost on Shoes in the Fur Trade, found here: http://nancymargueriteanderson.com/shoes/

The other thing to know about the fur trade is that there were many visitors, especially botanists or naturalists, who left journals that tell stories of the trade from a different perspective than those of the fur traders. Here are two books of that sort:

John Kirk Townsend, Narrative of a Journey Across the Rocky Mountains to the Columbia River [Corvalis, Oregon State University Press, 1999]. You will see in Townsend’s records that he writes of things the fur traders ignored — such as a Native woman giving birth in one of the canoes heading up the Columbia River to Fort Nez Perces. Following is the information I got from this book, and from the Dryad journals, that was included in mine — both Alexander Caulfield Anderson and Peter Skene Ogden were aboard the ship he writes of:

“The Dryad reached the mouth of the Columbia River on November 27, 1834. A heavy coastal fog prevented a good view of the bar, but the men could hear the violent crash of the breakers. The fog blew away the next day, but a heavy swell rose from the west and the breakers again pounded on the bar. Aboard the Dryad, a severe shortage of fresh water and provisions made the men’s situation uncomfortable. When a hard gale blew in a week later, the Dryad sailed out to sea for safety. She finally crossed the bar in five fathoms of smooth water on the morning of December 12, with all sails out, and reached Fort George [Astoria] on Sunday, December 14.”

Jack Nisbet’s recent book, The Collector: David Douglas and the Natural History of the Northwest, is another book that tells of things the fur traders would not have noted. David Douglas was a botanist who visited the West. Again, referring to my blogpost, Shoes in the Fur Trade, I learned that David Douglas bought two pairs of shoes at Fort Vancouver before he headed north to New Caledonia and Fort St. James — the relevance of that is that I had just been having a discussion with another fur trade historian on whether or not the fur traders had shoes. Douglas was a risk-taker, and there are places in his various journals where he wandered off and could easily have been killed. Eventually he was killed — a most inexplicable death. But that is for you to find out.

There are many more good books on the fur trade, and all of them are old. Today, people are afraid to say they research the fur trade; there is an enormous stigma attached to that kind of history. Some people are even refused good jobs, because they say their interest is fur trade history — can you believe that? And yet, I write about the fur trade proudly, and as you see I am not limited in what I can write about, as long as I stick to the years between 1793 and 1858 (more or less). I can write about the Natives, and do. I can write Shoes and when they arrived here — and tattoos, and exploration or expeditions or deaths and murders and flintlock guns and trade goods, and boats. What I cannot write about, and what I think people, who don’t know what the fur trade is, think we write about, is beating the beaver to death with a billy club. That did not happen in any fur trade I know of, so you have nothing to fear. I will not speak of that.

And yet, if I write a blogpost on the methods used by the Natives to hunt the animals they brought in to the fur traders — and I certainly can do that, and will — that post will get the largest number of hits of any post I put up. Why? Because it is about the Natives.

The fur trade is History — that is all. It is our British Columbia history, and our Native history, before 1858. That is all fur trade history is. Don’t be afraid of it. It’s just history. Our history. You should read it!

Oh, I think I said this my second post on this subject: my first post is here. http://nancymargueriteanderson.com/fur-trade-books/