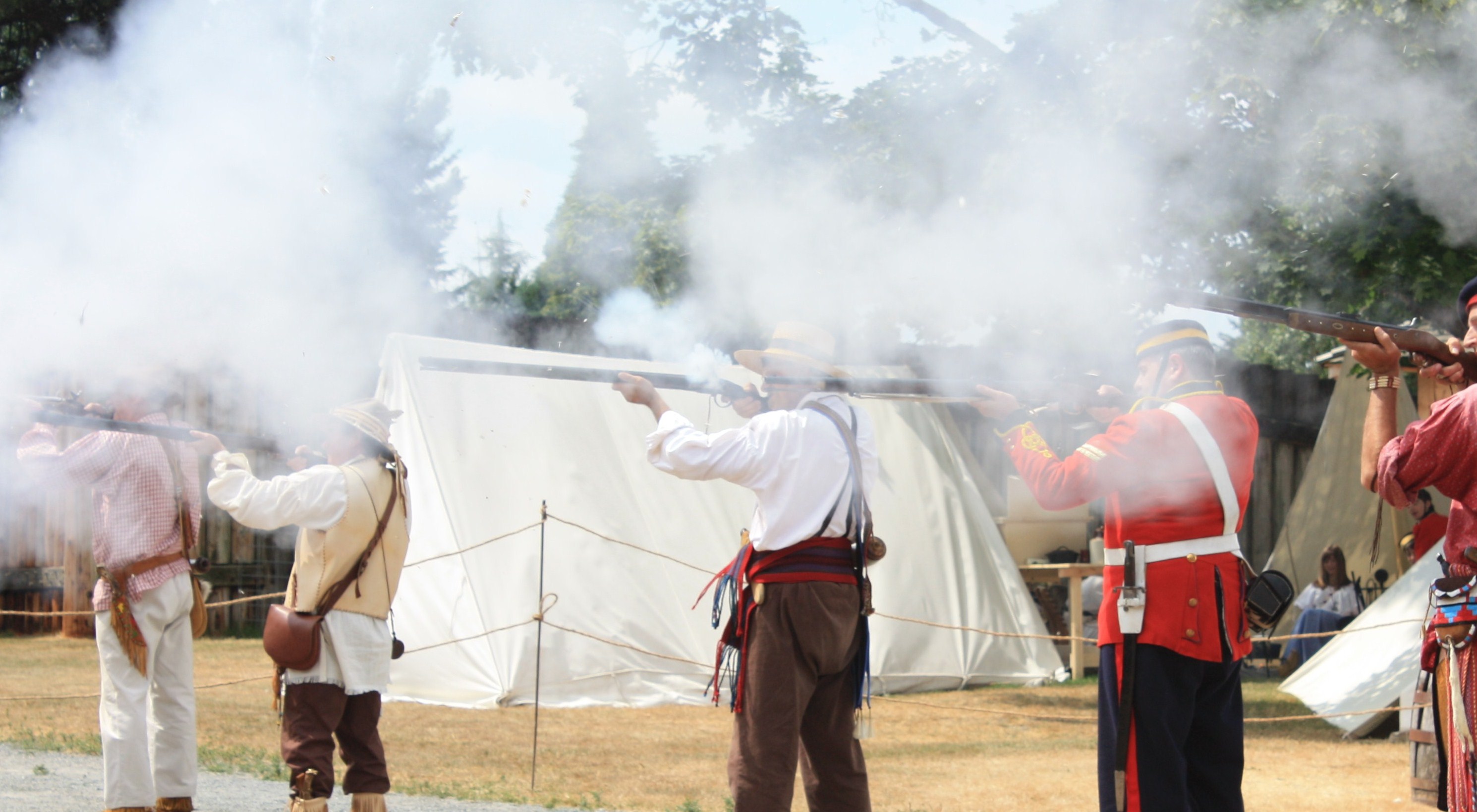 Alexander Caulfield Anderson was always fond of his guns — when he joined the fur trade in 1831, he purchased the best flintlock gun he could find in London. A few months later, at York Factory, he purchased a pair of flintlock pistols. And in 1833, at isolated Fort McLoughlin. he had an opportunity to use them.

At this North West Coast fort, Chief Trader Donald Manson had taken a tribal chief hostage and held him hostage inside the fort, hoping for the return of a deserter. Naturally the fur traders expected trouble. Anderson noted that : “Everything remained quiet and undisturbed for a few days, yet I could not but suspect the untoward tranquility that reigned around…

“Evening came on, and the men asked permission to go outside for water. I myself went out, having my pistols upon me, and leaving my other arms where they were easily accessible, for I had my misgivings, and they were very shortly realized.

“I advanced to the edge of the bank and was looking around when suddenly, within a few paces of me, I saw darting through the bushes a host of armed Indians. I turned at once, gave the alarm, and retreating to the fort was speedily prepared to defend the entrance.”

The scuffle was soon over and only one fur trader was injured, but a Native or two lost their lives. This was a common situation in the fur trade: there were times when fur traders needed to defend themselves when they were faced with a crowd of Natives who far outnumbered them. For Anderson, the second occasion occurred in 1846, when his exploring party stumbled on “a camp of Indians; the inmates of which upon our approach rushed out tumultuously with their arms, yelling very vociferously.”

The fur traders had left the fort with their guns prepared for firing, but now took off the canvas covers that protected the gunpowder from moisture, and waited for instruction from Anderson himself. For reasons you will see below, no man wanted to be the first to fire his gun!

As leader, Anderson took charge of the situation: “Judging, as it proved correctly, that their hostile demonstrations were not intentionally directed towards ourselves, I rode up and enquired their meaning. The tumult forthwith subsided; and the leader of the party, a one-eyed blackguard who is known as the Batailleur, excused himself….” and the tense situation was defused.

So why does the flintlock gun play such an important role in the situations the fur traders found themselves in? The fur traders’ guns needed to be cleaned, primed and loaded on a regular basis, especially when the explorers or traders rode through country inhabited by Natives who far outnumbered them.

Flintlocks got their name because they used flint, a hard, silicized-quartz found naturally almost everywhere, and used for thousands of years to light fires. The gun-owner knapped a small piece of flint from the larger stone, and inserted it into the gun where it would be driven by the force of the striker against the frizzen.

The flint was hard enough to knock a piece of steel off the frizzen and cause a spark, but the flint lost a bit of itself as well and would eventually need to be replaced.

The Natives used flints they picked up anywhere, but the fur traders imported the best flints from England — they were probably gathered at the base of Dover’s white cliffs.

“Lock, stock & Barrel” — a phrase familiar to all of us! The stock of the flintlock is the part that the fur trader held to his shoulder, and it remains today on modern day rifles.

The barrel is the metal part that the bullet travels down, similar to modern day rifles.

The lock is the metal part in the middle, where the gun workings are — the chambers for bullets or balls and the various working parts including the trigger. This part differs markedly from the modern day rifle.

The flintlocks were all smooth-bored muzzle loaders. To load the gun, the fur trader poured black powder into a measure he carried with him, and that might have formed a part of his powder-horn. He poured the measure of powder down the barrel of the firearm and, with a sharp tap of the gun stock on the ground, he knocked the black powder all the way to the lock where it would be ignited by the flash of gunpowder in the pan.

Next the fur trader wrapped a ball in a piece of tallow-soaked cloth, and inserted ball and cloth into the mouth of the barrel. He cut away the extra cloth with a knife he always carried with him and, removing the ramrod from the holder where it traveled as part of the gun, he rammed the ball all the way to the lock where the black powder lay.

Next the fur trader primed his gun by tipping a little black powder into the pan of the gun and snapping the steel frizzen over it — the pan and frizzen are on the outside of the lock, and a tube carries the spark into the gun where it ignites the gunpowder. When powder and ball is inside the lock, and gunpowder and frizzen outside but separated, the gun is ready to fire.However, it will not fire until the hammer is fully cocked, and released from its sprung position by a strong pull on the trigger.

These firearms were accurate, and at 80 yards the fur traders could put their shot into a target about the size of a saucer! But once fired — or if the gun misfired — it took an experienced man a full twenty seconds to reload his gun with powder and ball and make it ready for the second shot. In a confrontation with the Natives, who carried similar guns, the fur trader would always chose to negotiate, holding fire until it became absolutely necessary to shoot.

The Natives carried flintlocks, too, but the guns the fur traders sold to them were not as well built as their own guns. The Trade Guns, too, were always decorated with a brass serpent on the side, and a seated fox engraved on the back of the lock. These animals had a spiritual significance for the Natives, who also believed the symbols would bring them good luck in the hunt.

Percussion guns were quite different from the flintlocks, which used flint and steel to ignite gunpowder stored in the barrel of the gun. In both guns the explosion of the gunpowder powered the bullet: but in the percussion gun the flint and steel was replaced with a nipple, cap, and tube. The cap contained fulminate of mercury, an explosive chemical made of mercury, nitric acid and alcohol — the nipple accepted the cap, and the tube led the flame to the gunpowder in the barrel.

If you ever want to see these guns in action, attend one of the fur trade celebrations at Fort Langley or elsewhere, where it is likely they will have re-enactors who will demonstrate the guns and answer any questions you may have.

And one more little thing, relative to my last weeks’ post about salmon: In the papers of James Anderson, A.C.’s son, I found a note that said his father “was amazed to learn that Natives who fished at the salmon weir on Fraser Lake [and at Fort Alexandria] also killed fish by submerging the barrel of a flintlock gun up to the breach in the water, and pulling the trigger. The resulting explosion stunned the fish, which floated to the surface, and the gun never burst as it would have done if only the muzzle was submerged.”