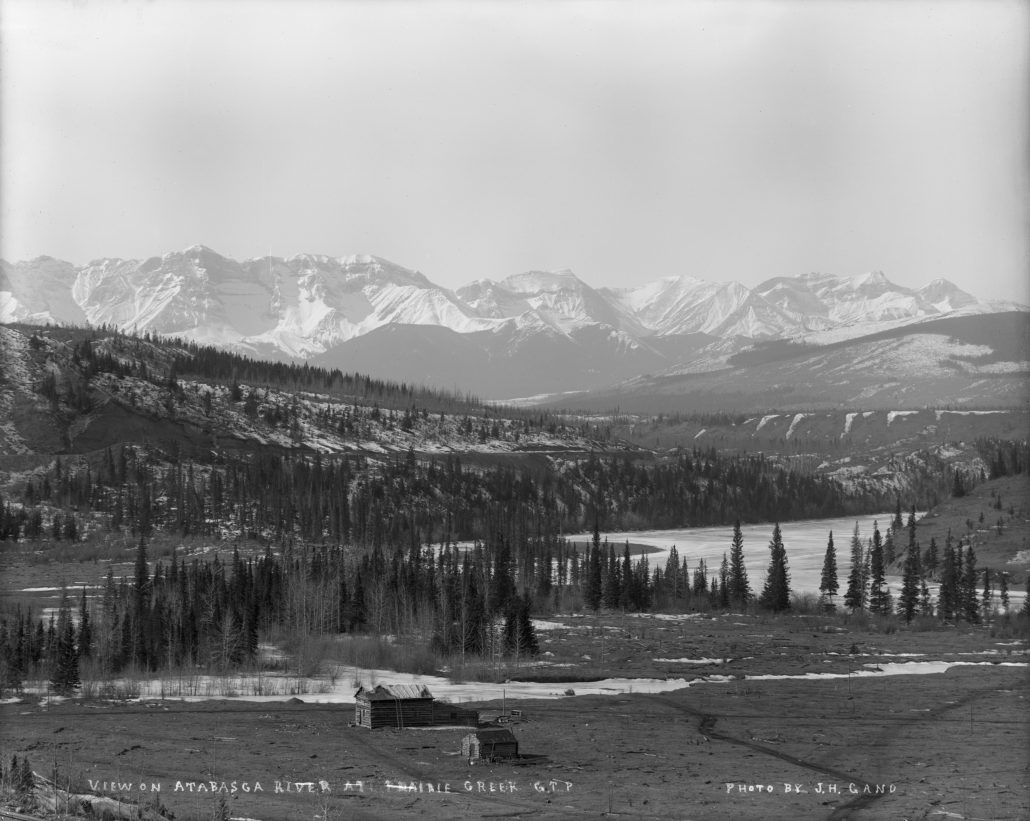 This is the eighteenth leg of the York Factory Express stream, and today we are travelling up the Athabasca River west of Fort Assiniboine. At the end of the post we will have reached Jasper’s House. Interestingly, in some years this journey was made in canoes, but at some point in time the Hudson’s Bay men substituted a variation of York Boats, for the birchbark canoes. As they departed Fort Assiniboine in 1826, Aemilus Simpson wrote this about the Canadiens who were at that time responsible for the heavy work of paddling the canoes upriver.

Our brigade being distributed into three Canoes, very deeply laden, each Canoe has seven Men, besides boys, but heavy laden as we are [we] make Comparatively quick progress to what we did in the Boats ascending the Saskatchewan [River], and the Canadian crews appear very well pleased with the change, as they are much more used to and understand the management of the Birch Canoes much better than the Boats. To the passengers however the change I think affords us no advantage, the heavy lading reducing our room to very small bounds. [B.223/223/a/3, HBCA].

The boats the HBC men used on the Athabasca River were different from the York boats they used on the Saskatchewan River. York boats had pointed ends; the Athabasca boats were sturgeon-nosed, meaning they had a flat end at front and back. Sturgeon-nosed boats were quicker and easier to build, but may not have been as well-crafted as the old York boats. Over the years there were many complaints about these large, unwieldy boats, but by 1848 Governor Simpson advised the HBC Board of Management at Fort Vancouver that, according to Thomas Lowe, the Athabasca river boats were “light handy craft of small draft of water, better adapted for the navigation, than any other we have in our power to institute.”

So, seeing as I have already mentioned Thomas Lowe’s 1848 journey to York Factory and return, I will post what he has to say of this section of the journey here, beginning with his arrival at Fort Assiniboine:

[September] 22. Friday. Remained at Assinaboine [sic] all day, and had our two boats properly caulked & gummed & allowed them to remain sunk in the water all night… Divided the cargoes & crews tonight.

There were upwards of 40 pieces per boat, as at this time the incoming express men brought packs of furs across the mountains for delivery to the Russians on the northwest coast. As there were sixteen men per boat, besides the passengers, they were quite heavily laden.

23, Saturday. Had the boats bailed out this morning and took breakfast after they were loaded. Started from Assinaboine about 9 am and as the water is in fine order we got as far as the grand Bas-fond. Only half the men are on the line at one time, and the others walk ashore. We change them three or four times in the course of the day. If the water remains in the same state as it is now we will make a quick passage.

The grand Bas-fond is a shallow weedy place in the river, mentioned by almost all the Gentlemen who kept these journals. When Lowe talks about the men on the line, he is referring to them tracking the boats — that is, towing the boats upriver by a line attached to the bow while they [the men] walk up the river bank or in the river itself. As you see below, the resting men trailed behind the boats.

September 24th, Sunday. Fine warm day. In the forenoon while the men were walking ashore following the boats, a chocolate Bear which was running up from the water side found himself sandwiched in the midst of them, and was so taken by surprise that he jumped upon one of them, Norman Smith, and before he could be frightened off by the others had inflicted a very severe wound on his forehead, with his teeth, besides two or three smaller ones below the eye, but nothing very dangerous. Made very good progress today, and marched abut two thirds up La Cross Isle.

Norman Smith probably crossed the mountains with the incoming express, but he is not found in any of the existing records. I believe he crossed with the New Caledonia men to Fort St. James, and the reason that I believe this is because I found mention of a man named Smith in the Kamloops journals. The incoming York Factory express men who went to Fort St. James spent the winter there, and then were distributed through the territory, as far south as Kamloops. It is not uncommon that men “disappeared” once they crossed the mountains. The journals for some posts west of the mountains (as elsewhere) are skimpy to non-existent.

25, Monday. Fine weather. Breakfasted near the end of La Cross Isle, and encamped at the further end of the Long Reach.

26, Tuesday. Exceedingly warm, and the River has risen a little in consequence. In the afternoon saw several freemen a little below McLeod’s Forks [in the immediate area of Whitecourt, Alberta]. They had only half a beaver to give us. Two of the Jasper’s House men got a small canoe from them, and are to go ahead in it. Encamped about a mile above McLeod’s Forks.

27, Wednesday. Strong head wind all day, but very warm. The two men who started ahead yesterday broke their canoe, and we embarked them again late in the afternoon. Encamped at Mr. McDonald’s Cache [Where a McDonald, probably Finan, cached a canoe that later York Factory Express men had some trouble locating].

28, Thursday. Rather cloudy most of the day, but no rain. Came on very well today, as there are even fewer Islands, and better tracking ground.

29, Friday. Fine day. Breakfasted at the Grand Point, opposite a small River which falls into the Athabasca on the right bank. About 2pm passed the Beaver River, and encamped on an Island a good piece beyond.

September 30, Saturday. Cloudy all day, but no rain until the afternoon when we had a thunder storm. Shortly after breakfast came to an encampment of 3 lodges of freemen, but they were all off, as we supposed, to bring home meat. Here we took a canoe which Mr. Colin Fraser had got made for himself, and put 5 men and 4 bags of Pemican in it. It will accompany us for the present.

2, Monday. Snowing most of the day, and cold. A strong current all day, and made poor progress. Encamped on an Island where there was a beaver lodge.

On large rivers such as the Saskatchewan and the Athabasca, the North American beaver (Castor canadensis) built lodges but not dams.

3, Tuesday. Clear cold weather. Made poor progress in the morning, but got on better afterwards. Encamped about a mile above a large open space on the right bank which has been burned long since, and now forms a sort of prairie. Encamped on left side.

4, Wednesday. Very cold in the morning, but warm during the day. Very strong current. In the forenoon had to put ashore to have Charlebois’ boat repaired, as he damaged it yesterday in a Rapid. Stopped there about 3 hours. Encamped upon Canoe Island.

5, Thursday. Same weather as yesterday. Breakfasted at the bottom of Rapid Croche. Encamped about a mile below the Mountain View.

Lowe’s Rapid Croche is Rapids de Croix or Cross Rapid, where in 1814 two NWC voyageurs drowned. His “Mountain View” is in the immediate area of Hinton, Alberta, where the “first grand outline of the Rocky Mountains bursts upon the view,” according to A. C. Anderson. Artist Paul Kane noted that “the men gave a loud cheere on seeing them [the mountains].” George Traill Allen wrote, “Today we came in sight of the Rocky Mountains and at sunset we had a splendid view of them, their summits towering to the skies and covered with snow.” Aemilius Simpson thought that the mountains “seemed to bid defiance to the efforts of Man to gain their eminences.” However, from other Gentlemen who had made this journey before, Simpson learned that “detached Mountains form Grand defiles, it is by these that the traveller is enabled to make his way across the Mountains.”

6, Friday. Fine clear weather. This morning Mr. Colin Fraser started ahead for Jasper’s House in the canoe with 5 men light, and expects to get there in three days. Made good progress today as there were few Rapids & good tracking ground.

October 7, Saturday. Fine weather, not cold. Came on very well today, and encamped at the foot of the Rapids below the Lake [Brule Lake].

8, Sunday. Beautiful day. Breakfasted at the commencement of the Lake, and as we had a good deal of trouble afterwards in finding the channel spent the day in the Lake, and encamped about 2 miles up the River. It was fortunately calm weather, which is a very unusual thing in this quarter.

9, Monday. Fine weather. Arrived at Jasper’s House about 3 pm, and had the boats unloaded at once on the opposite side of the River. Mr. Fraser arrived here with the canoe yesterday. Had a dance tonight at the House, and there was no want of women as there are about a dozen lodges of Freemen here.

Thomas Lowe’s journals often give little details of life at the fur trade posts, that no one else mentioned. The dance he spoke of above probably happened every year as the express men came into the fort, but no other journal-writer mentioned it. I also find it interesting that before they left Fort Assiniboine, but after they had caulked the boats, they sank those boats in the river to expand the planks to make the caulking more secure. When the men finally reached Boat Encampment (a post or two beyond this one), they carved their paddles at the campfire, to take the boats downriver. No one else mentioned these things, and yet they must have happened year after year.

To return to the first post in this series, go to: http://nancymargueriteanderson.com/first-leg/

When the next post is published, it will appear here: http://nancymargueriteanderson.com/nineteenth-leg/