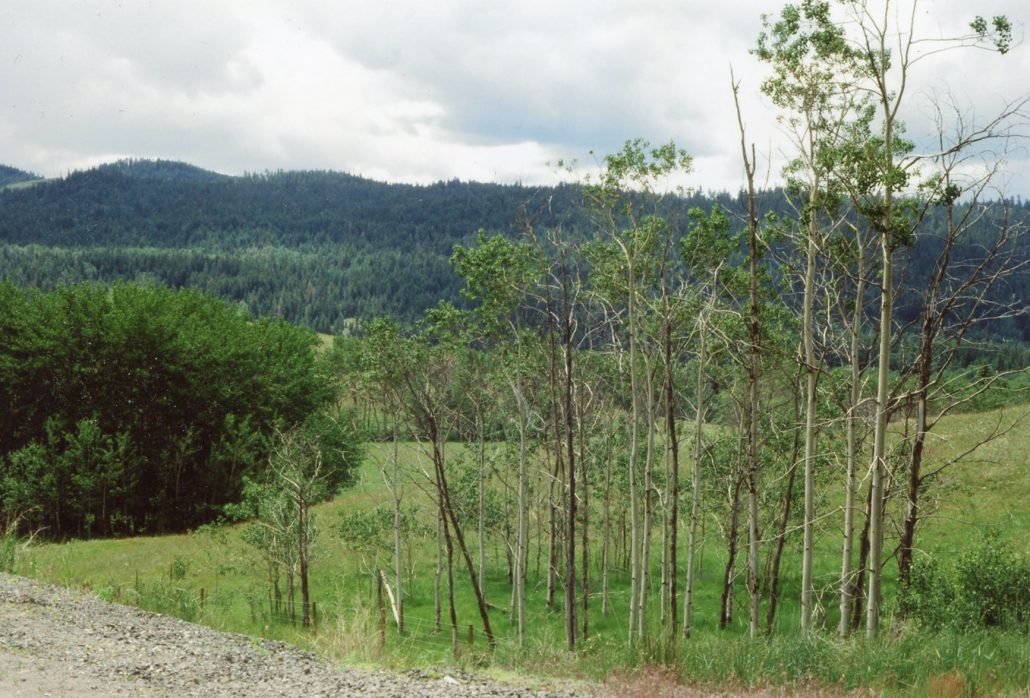 The country along the brigade trail that ran north from Tulameen to Nicola Lake. This isn’t the Coldwater River valley, but I will find a photo for you — I have lots. It just takes time and I have so little of that right now (Sorry).

The historic Coldwater River is one of the most beautiful rivers in British Columbia, and a long standing route to the Fraser River for both the First Nations of Nicola Valley, and the Métis who worked for the Hudson’s Bay Company at Kamloops and Fort Alexandria. It is also part of one of our brigade trails, first explored by an HBC trader in 1847 and used for the 1848 brigade, and the outgoing 1849 brigade. Now it is planned that the Trans-Mountain pipeline will plow its way through this historic river valley on its way to the Pacific. The Coldwater First Nations reserve will be severely affected by this decision. Can we somehow support them in their fight? We can, even if you don’t want to support them directly. Anyone who is interested in preserving the historic trails in the province can step up to the plate, and support any group who is willing to fight for preservation of the Coldwater river valley trail.

For more information, please read the recent article in the Tyee, at http://thetyee.ca/News/2019/10/04/Why-Trudeau-Trans-Mountain-Dreams-May-Trickle-Out-Coldwater/

This valley is one of my favorite places to visit when I am in the interior, and I still haven’t explored all of it. It is such a beautiful road, and it has its place in the early fur trade history of British Columbia. This trail is marked on an 1827 map drawn by Archibald McDonald, who was in charge of the Thompson’s River post. Sam Black’s Map of the Thompson River district, drawn in 1829, does indicate that he is aware of a “Portage to Coldwater,” from the Fraser. Though he clearly does not know exactly where it runs, he notes that it passes through a piece of wilderness that has “Terrible Mountains All Over Hereabouts.”

However, the Métis employees at Kamloops made their way to the Fraser River at Squa-zoum (Boston Bar) via the Coldwater River valley, though it appeared they could not travel the western part of the trail on horseback. And of course, the First Nations peoples from the Nicola Valley and the Okanagan had long known of this route to the Fraser River, as they used it to access the Fraser River fisheries.

Alexander Caulfield Anderson was guided over this valley trail in 1847, coming from the West. His guides were an Okanagan First Nations man named Tsilaxitsa, and a Stuwix or Similkameen man whose real name I do not know, but who is referred to in the HBC journals as “Blackeye’s Son.” These two First Nations men had recently opened a new trail that led from the horse-friendly section of the old trail down to the Fraser River at Boston Bar. As Anderson and his party climbed the hill behind modern-day Bston Bar, they reached the familiar old trail — and two of Anderson’s Métis employees immediately recognized it as a section of the trail that led west from the Coldwater River valley. They both told Anderson that beyond this point, the trail was good. It is clear that in the 1840s, the Coldwater River trail, that led across the plateau to the Fraser, was familiar to the Métis employees of Kamloops and Fort Alexandria.

This is what Anderson wrote of his journey through the Coldwater River valley on his return to Kamloops from the Fraser River in 1847:

Showery weather, with strong westerly gale all day. Leave encampment 4 1/2 a.m.; in two hours reach the ford of Rivière la Grimace (Maka Creek), a feeder of Nicholas (Nicola) River… Thence three hours to the Cold Water River, another tributary of Nicholas’s River; cross and follow down the right bank, through a fine country, till its junction with the main stream (Nicola River), a distance of about 20 miles E.N.E. At 5 reach West end of Nicholas Lake…

It is a beautiful country — spectacularly beautiful — and unspoiled. But as you will see, it is also full of history — First Nations history, and Métis history. Eventually, the HBC traders of the time also rode over this trail.

After Anderson passed through the valley on his return home in 1847, his men, and the First Nations men who had accompanied him, marked out the trail. It was never finished as a brigade trail. Then, disaster struck! In November 1847, the massacre of the American missionaries at Waiilatpu brought on the Cayuse War and forced the New Caledonia and Fort Colvile brigades to bring the furs out to the coast via Fort Langley.

The brigades made it out to Fort Yale, newly built at the foot of Douglas’s Portage that led from Spuzzum to Yale. They came downriver by boat to Fort Langley, leaving their packhorses behind them in a place where there was little grass. Though the Yale and Spuzzum First Nations fed the starving horses with whatever grass they could gather, the animals were weak from hunger by the time the HBC men returned to Fort Yale. George Stewart Simpson, who was also on this brigade, told his father [Governor Simpson] that the horses were “literally skin and bone.”

We got on very well on the portage with the exception of a couple of horses falling the ascent of the Big Hill & some little confusion in a swampy part of the road rendered worse than its original state by the frequent passing & repassing of horses.

At Simon’s House, which must have stood close to the Spuzzum First Nations village on the “little flat,” the HBC men swam their horses across the Fraser, drowning a few of them. Then they made their way up the big hill over Lake Mountain and down its north side cliffs to Anderson’s River, and up the hill by Utzlius Creek to the top of the mountain. By this time the HBC men were losing horses because of starvation and injuries.

11th August: The horses were collected and driven to the park [corral] for an early start tomorrow morning; the poor animals of course much reduced from this constant want of food and the hard labour they had already undergone in the ups & downs of such a rugged & mountainous tract of country.

When they finally reached the Coldwater River valley, after passing over the plateau at the top of the hill, you can almost “hear” the relief expressed in Henry Peers’s journal. Here he and his small party are probably camped somewhere near modern-day Maka Creek:

16th Aug. Made a late start and the consequence was I, with half the Brigade, was obliged to encamp only about 4 miles further on; the others marching on to “Clear Water River” [Coldwater] where they joined Mr. [Alexander Caulfield] Anderson & [Donald] Manson. Good feeding. Fine weather. Here we may consider ourselves out of difficulty, the country being more open.

There were no more complaints about the country from the HBC men, though it must be noted that the brigades only travelled six to eight miles a day — far shorter distances than the average fifteen miles they normally covered in good terrain.

On the 22nd of August they arrived at the Thompson’s River post of Kamloops. They had begun their journey from Fort Langley on July 17, and reached Fort Yale on the 24th. Peers said that “27 (or upwards) of horses were killed & lost this voyage.” But that was only on the incoming journey — Governor Simpson’s letters indicate that 70 horses were lost, “together with 25 pieces of merchandise.” Manson thought that Douglas’s portage road was feasible if it were not for swimming the horses across the Fraser, “which will always be attended with great risk in the summer when the water is always high.” Anderson complained about Douglas’s Portage, but thought that the climb up the hill was feasible if the horses were well fed. Naturally, no one complained about any portion of the road through the Coldwater River valley!

In later years, Anderson wrote of the 1848 brigade journey in his manuscript titled “History of the North West Coast”:

Our party consisted of the three “brigades” of New Caledonia, Thompson’s River, and Colvile. We had about 400 horses (many of them unbroken) and in all about 50 men. Mr. Donald Manson, of New Caledonia, as senior officer, was in general charge, I as head of the Colvile district… was second. It is needless to enumerate the difficulties which we had to encounter and surmount: suffice it to say that we continued to reach Fort Yale, which had meanwhile been established, with our packs, and thence ran down speedily to Langley. On the return journey the difficulties, if not dangers, were greatly multiplied; but at length we reached Kamloops, though with the loss of a good deal of property and many horses.

The HBC men came out by this trail in 1849, but they returned by a new trail, which led over the Tulameen Plateau — abandoning the route through the Coldwater River valley. But even though it was only used as a brigade trail for two years, I still want to see this beautiful place protected. I don’t want to think of the valley being dug up for a pipeline that brings oil to the coast. I know that the valley will recover from the damage that building the pipeline will cause, though it will be forever changed.

But, as you see, the Coldwater First Nations are worried about their aquifer — the underground layer of gravel and broken rock that stores water, allowing it to be brought to the surface through water wells. Considering our shared history in the Coldwater River valley, I think we should also support the Coldwater Indian Band in their fight against the Trans Mountain pipeline. You can do this directly, perhaps, with the band, but also those of you who are interested in our historic trails can support them, indirectly, by supporting whatever outfit you think will best fight this good fight.