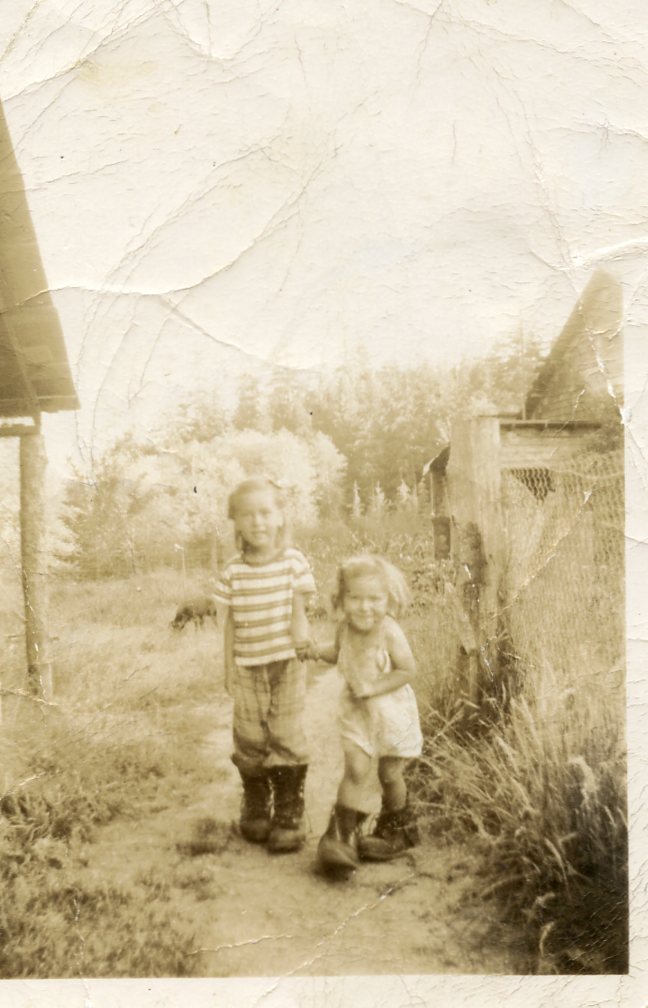 This image is of myself and my younger sister, at our old house on Cortes Island. I always felt that we grew up in a situation much like Anderson’s children, and that James and Eliza may have looked and dressed much like us. Well, not in logging boots, obviously.

Interestingly, the Anderson family arrived at the fort in its old location on the west side of the Fraser River. As James writes:

Fort Alexandria, as I first have a dim recollection of it, was situated on the flat or bench nearest the Fraser. This is firmly impressed on my memory by the fact that during a summer freshet… that the water rose to such a height that the fort yard was inundated, and therefore…the fort was removed to the upper bench, and well I remember getting hold of an axe and proceeding to demolish the apology for a mantelpiece in one of the rooms, in the belief that I was assisting in the general removal. It was at Alexandria that I first learned to ride, but prior to that period it used to be my dearest wish to accompany my father on his shooting excursions, the game being prairie chicken, grouse of several kinds, ducks and geese and in winter the Arctic hare. So strong was my desire that I took the opportunity once to watch his departure on horseback and I followed on foot (I was probably between 5 and 6 years old then). The country was fairly open and I managed to keep my father in sight for a little while, but on reaching a brook which I had to cross, my courage forsook me and I burst into tears. Not very long after I heard the measured gallop of a horse, and Michel Ogden, an employee, came up on a horse known as Patte Croche, and I was ignominiously lifted up and taken back to the fort. Michel Ogden was what was known in the Company’s service as Post Master, the title being bestowed on a grade lower than Articled Clerks. I may remark that except to our parents, we the children spoke French Canadian to every one, hence the name of Patte Croche for a horse. (James Robert Anderson, Memoirs, p. 50)

Michel Ogden was one of Peter Skene Ogden’s sons. Others of James’s baby-sitters were “an Indian who frequented the fort a good deal, on account of his rotund form, was dubbed Gros Ventre; another on account of his physiognomy was called Tout Laid. Many other nicknames which I have forgotten were applied to the various persons and animals attached to the fort.” Canadien and Metis employees everywhere gave nicknames to every one and every thing: one of the many traditions of the fur trade. James’s story continues:

Snowshoes we had to wear all winter as there was no other way to get about, but oh how sick and tired I got of them before the close of the long winter. I have often looked in amusement at the gaily got up young men and women in the east going out for a snowshoes walk on hard snow, and wonder how they would like it if they had to use snowshoes for five months and go through new fallen snow. Gros Ventre, the Indian alluded to before, was our horse and he used to drag us; that is my eldest sister and myself and younger brothers about the fort yard in a rough sleigh. My father had a carryall [carriole] and a pair of good horses, so that we had some sleighing and as part of the amusement a spill in the snow occasionally. A boy called Batistot, son of one of the employees, initiated me in the explosive character of gunpowder and I forthwith got my father’s powder horn and was in the act of pouring the contents on the fire when I was detected; had I succeeded in my laudable desire I suppose these lines would not have been written. Holes in the ice on the river were cut for purposes of obtaining water and spearing fish. The plan for the latter operation was to sit over the hold with a blanket over the head so as to exclude the light, and spear in hand, watch for a fish to come up to the surface when it was speared… (James Robert Anderson, Memoirs, p. 55)

Did you even know that the Fraser River used to freeze over in the winter, every winter, and was used as a highway in that season. One year it even froze as far as Fort Langley, and Henry Newsham Peers skated down the Fraser from Fort Hope to Langley on the ice! James’s story continues:

Once venturing on the ice alone, I attempted to cross a hole by a bridge of ice which had formed over the hole; the bridge broke and I fell into the swift running Fraser, but I was evidently not intended to be drowned as a floe of ice had jammed under the hole and although I felt my legs being twisted about by the current and I was horribly cold and frightened, I managed to scramble out and return to the fort where needless to say an argument was used which effectually cured me of further excursions on the ice. Those fierce train dogs, how terrified I was when I awoke one night by a noise going on and discovered a huge wolf-like brute starting at me and snarling. I shrieked with terror and the intruder was ejected. The cause of all the trouble was that the winter outfit of furs from Fort George [Prince George], in charge of Mr. [Donald] Manson, in attempting to cross the river on rotten ice above the Fort, had broken through and suffered some loss, arriving at the Fort late at night and this dog was one of the team. (James Robert Anderson, Memoirs, p. 55-56)

The HBC men in New Caledonia lived on salmon, and oh, how sick they got of that food!

Salmon was the principal article of diet and the annual run was therefore eagerly looked for and stores of dried salmon put up for winter use. The first run is fairly good but at the last when the fish have become spent, they are not palatable and became white when dried and used then to be designated as Skil-a-waise. How tired I used to be of eternal dried salmon only relieved by a diet of hares when they were to be had…. Flint and steel were the sole means of obtaining fire, and flint lock guns only were known [in New Caledonia] until the year 1847, when my father obtained a percussion gun from Parker, Field and Sons, 233 High Holborn, London… About this time I had acquired the art of riding quite well, and I therefore used to accompany my father on his shooting excursions and many is the fine shot I have witnessed with the gun described. There are fine open areas in the vicinity of Alexandria which were frequented by coveys of Prairie Chicken: Pheasants we called them… Often in the breeding season we watched them performing that curious dance in a circle prior to mating. A number of ponds and lakes gave excellent wild fowl shooting. One of those lakes was dubbed Cake Lake to commemorate the loss of our luncheon which consisted of cakes, and for the safety of which I was responsible. The largest of these lakes was known by the pretty Indians name of Stonia, the most distant from the Fort, least visited for that reason and the fact that it afforded the poorest sport. In winter we drove out in the carryall, and on arriving on our ground we donned our snowshoes and mine was the duty of beating. Under the bent branches of trees and shrubs almost invariably a hare was hidden, and as he scurried across the open he met his fate. Those were the days of thorough enjoyment, the bracing air, the drive out, and above all the thorough good sport we had, although I only did the beating. (James Robert Anderson, Memoirs, p. 57. I should let everyone know that I own a copy of this Memoirs, and I presume that the page numbers are the same as those in the two copies in the British Columbia Archives, Mss. 1912, although I have never checked this out for myself).

Every one of Anderson’s kids grew up to become an accomplished hunter, and you can see why. I think that Anderson really loved his time at Fort Alexandria and was sad to leave, but leave he must. The farm was gone and the men who maintained it had returned to Quebec. The Indigenous people were often employed at the fort, but there were not good farmers. As guards for the horses they were useful, but they often disappeared when something more important came up. But as baby sitters for the children: they were superb! Tout Laid accompanied the Anderson family to Kamloops in 1847, and tied young Henry (the future Constable Henry Anderson of the B.C. Police) to his saddle so he would not be lost. Henry, being Henry, objected. Sometime I will write his story, but for now this is James’s story.

James returned to Fort Alexandria in 1893, “forty-five years after, alone. All that I could find of the old fort and buildings were a few moldering sills to mark their situation.”