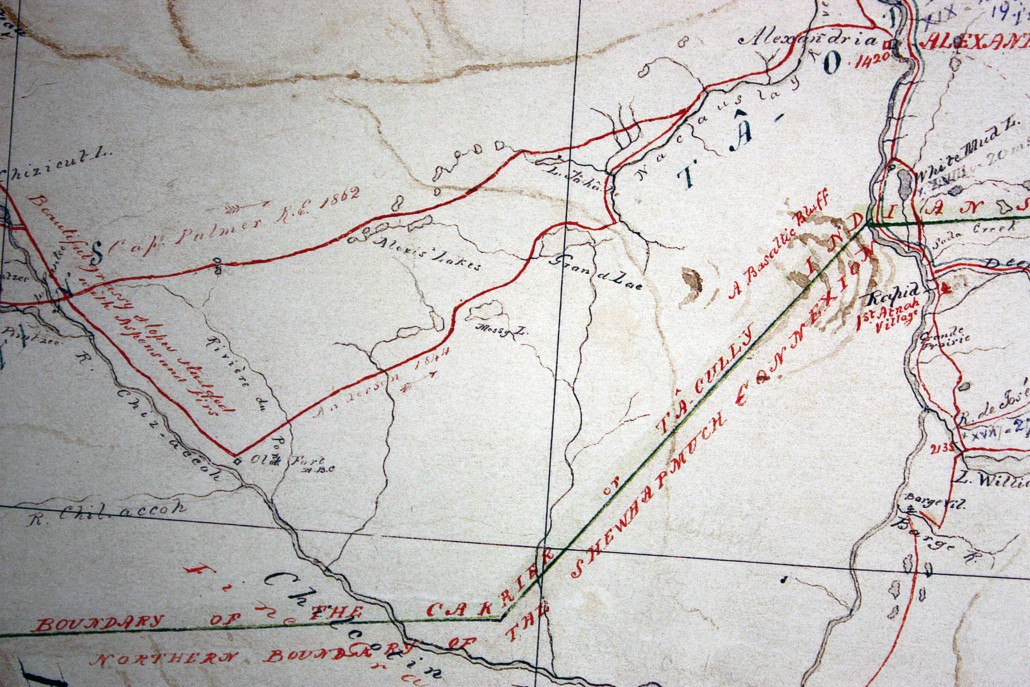 Chilcotin Post, from A.C. Anderson’s 1867 Map of British Columbia, CM/F9, Courtesy of the Royal BC Museum, B.C. Archives. Detail from original map. Fort Alexandria is in the top right hand corner of this section of the map. The horse route the HBC men traveled between Fort Alexandria and Chilcotin Post is shown here, and the red line heading northwest from Chicotin is the route by which Anderson traveled on his return from establishing the new Thleuz-cuz post to the north.

The Chilcotin post, first built in 1829 as a temporary post and completed at a later date, stood at the junction of the Chilco and Chilcotin Rivers and was an outpost of Fort Alexandria, on the Fraser River to the north-east. Here is what Bruce McIntyre Watson says about the place in his 3-volume book, Lives Lived West of the Divide.

An on again-off again outpost of Fort Alexandria, Fort Chilcotin was set up to capture the Chilcotin trade at the confluence of the Chilco and Chilcotin Rivers. An exploratory expedition as early as 1822 showed some promise and a plan to open it in 1823 was thwarted when personnel elsewhere were redirected because of the murders at Fort George and Fort St. John. A further exploratory visit by William Connolly in 1825 found the natives fractious and disputatious with their neighbours. Two years later plans were again put on hold even though hostilities had abated but the salmon runs were so poor that the Chilcotin [Tsilquot’in] had to abandon the area and head towards the coast for food, a move necessary every three or four years. In 1829, when the post was finally set up, local Alexandria natives refused to go to Chilcotin as still fresh were the memories of hostilities (Ft. St. James Correspondence Book 7, fo. 6d-9d, 24d-25). By the end of 1830’s, they may also have brought in “two Milch Cows, one Calf and a Bull” (BCA Ft Chil 1). Often closed for months at a stretch for various reasons, it was abandoned again in 1835-1836. Because of potential hostilities during the winter of 1838-1839, the post palisade had to be strengthened and two bastions built. One possible cause of the hostilities is that there was a settlement and trading point here, indicated by the presence of depressions from native subterranean houses. By the spring of 1839, they were back to planting a garden of potatoes. However by 1842, they were beginning to make trips to the Fluz Kluz area. The HBC finally closed the Chilcotin post in September 1844 in favour of Tluz-Kuz and the farm animals returned to Alexandria. Today there is a bee farm opposite the site.

I hadn’t pictured the Chilcotin post with palisades and bastions, but considering the Natives who lived in the area, I suppose they were necessary. I am also informed that the oats that were planted at the fort still sprout and grow every year, reseeding themselves in the summers. Amazing! Anderson said that the oats grown by the HBC were a very inferior oat, so it would be interesting to find out what kind of oats still grow at the old Chilcotin post. DNA tests are prohibitively expensive, however.

The clerks and men in charge of the post at various times were George McDougall [1829-1830], William Fletcher Lane, John McIntosh, Baptiste La Pierre, William McBean, and Donald McLean. I have written about George McDougall here: http://nancymargueriteanderson.com/george-mcdougall/

[When I write my John McIntosh story, I will post it here! Its very interesting, the connections he and his family had to later American history.]

So for your information, I include a few excerpts from a manuscript which speaks of the early history of the Chilcotin post. Anyone who wants to research the place should read: “Fort Chilcotin, Misc. material relating to,” Mss MM/C43, BCA. These first excerpts explain that there was still no permanent trading post at the location in 1831. The words are those of Peter Warren Dease, in charge at Fort St. James. A derouine was a trading expedition with packhorses:

1831, May 14. Our deficiency of men renders it out of our power to keep up the Chilcotin Establishment but Mr. [Alexander] Fisher [at Ft. Alexandria] intends sending occasionally during the Summer by which means he will secure their hunts, give them some encouragement to work in the Expectations of having again the post established of which they appear to be very desirous.

August 14. Arrived at sunset at Alexandria, where I find Mr. Fisher and all his people safe and well… Three derouines were made to to the Chilcotins, and produced about 3 packs.

October 9. In a letter dated 24 [September] after the Departure of the canoe Mr. Fisher mentioned having sent La Pierre his Interpreter with a man to the Chilcotins from when[ce] they returned the 9th Ulto. Having met a very rough reception, that tribe behaved with much insolence and used some Menaces towards them, which prevented them from going so far as was intended.

Letters from Peter Warren Dease indicate the post was in operation in outfit 1833-34, and it continued to be kept up and to make a reasonable profit. However, sometime during the outfit 1835-36, the “Indians of Frazers Lake and the Chilcotins” had been “troublesome and disorderly.” A.C. Anderson was in charge at Fraser’s Lake at that time, and yes, he confirms this. There was good reason for this disorder. From The Pathfinder:

Under [Peter Skene] Ogden’s new system, the traders forced the hunters to trade furs for their supplies for the coming trapping season, and to gradually pay off debts accumulated under the old system. The Dakelh hunters who traded at Fraser’s Lake, and the T’silhquot’in people who surrounded the Chilcotin Post south of Fort Alexandria, had a reputation for being difficult, and this year they caused so much trouble that Ogden ordered the temporary closure of the Chilcotin post. It took four years for Ogden’s traders to completely change the old system, and the Natives’ dissatisfaction had an immediate effect on the fur trade. In the year before Anderson arrived at Fraser’s Lake, the New Caledonia brigade had delivered 4,800 large and 2,200 small beaver skins to Fort Vancouver, well up to par for the district. In Outfit 1835 — the months from June 1835 to May 1836 — fewer beaver skins came into the post: only 3,800 large and 1,400 small pelts. Other furs were traded at much lower levels as well, In the winter of 1836-37 the numbers bounced back and the Native hunters delivered 4,100 large and 1,650 small beaver skins, which may have included furs they had refused to trade the year before.

In 1838, William McBean worried about the safety of the Chilcotin post, writing in his journal that:

An Indian died last night, whose body, contrary to usual custom, they immediately buried… Everything quiet and not an Indian comes to the Fort. Three have passed on their way to Long lake seeming in a great hurry and not stopping to the Fort — a conduct very unusual. I begin to think they meditate a blow upon the Fort — and I am badly provided to receive them as my Fort is not fortified and destitute of a single Bastion.

By 1839 McBean had strengthened the post though the work was “coarsely done,” though “ball-proof.” It is interesting to note that had the Natives sawn through the four posts that supported the bastion, they could have successfully overtaken the post!

Monday 19th [December 1842] Baptiste LaPierre arrived from Chilcotins with the accounts of that post. Mr. McLean writes me that all is well there, but the returns were very low.

Friday 19th [May 1843] Liard arrived from the Chilcotins bringing the intelligence that the Atnahs [Secwepemc] are at war with Chilcotins tribe, and threaten to pillage the post. Lapierre requires aid and it is not in my power to send him any just now. [McLean was writing the journal as A.C. Anderson was away from Fort Alexandria].

Saty. 15th [July 1843] This evening Mr. McLean and Liard cast up from Chilcotins, which they left this morning, with two of Mr. McLean’s horses. The object of their coming is to procure a supply of provisions, which unless salmon arrive soon, we are little able to afford, having about a thousand salmon only.

At this point, the Chilcotin post was closed down and the area served by derouine — that is, a pack train and man trading for their pelts. Quite often, too, the Tsilquot’in came to Fort Alexandria to trade.

Wed. 9th [October 1844] The only occurrence of note is the arrival, yesterday, of Allan & 3 other Chilcotins, who today traded 7 beavers (large and small) among them, for Ammunition chiefly.

Mon. 21st [October 1844] I understand the Chilcotins have a few Beavers among them, & as they are in want of ammunition I am in hope of securing at least a portion by sending now. But if I wait till they have hunted marten sufficient to purchase a supply, I shall lose their Beaver. By securing the latter now for ammunition, the martens will always come in for other supplies.

Tuesday 28th [October 1845] Pere Nobili, accompanied by his man & Francois, his interpreter, off to Chilcotins with the view of communicating spiritual instruction to the natives. [Pere John Nobili is a missionary, of course, and Reverend Modeste Demers, who was in the territory when Anderson arrived in 1842, had already been to the Chilcotin post].

It was Alexander Caulfield Anderson who closed down the Chilcotin post and opened the Thleuz-cuz [Fluz Kluz/Tluz-Kuz] post. He suggested the change in 1843, in 1844 he got permission to build the new post on the Blackwater River to the north. The reasons: the Natives were friendlier than the Chilcotins [Tsilquot’in], and the HBC obtained the furs that were heading west along the Grease Trail to the coast. In the year following Anderson reported to Governor Simpson on his visit to the Thleuz-cuz post:

The post of Thleuz-cuz was established in September; and I am happy to inform you, is doing extremely well. I visited the place in June in order to make the necessary preliminary arrangements, and met there a large concourse of Indians from different posts in the vicinity. Among them were some of my quandom friends of Fort McLoughlin, who after a while recognized me.

The presence of Natives from Fort McLoughlin might have made Anderson nervous, as ten years earlier he had shot and killed one of them. The story is in my book, The Pathfinder.