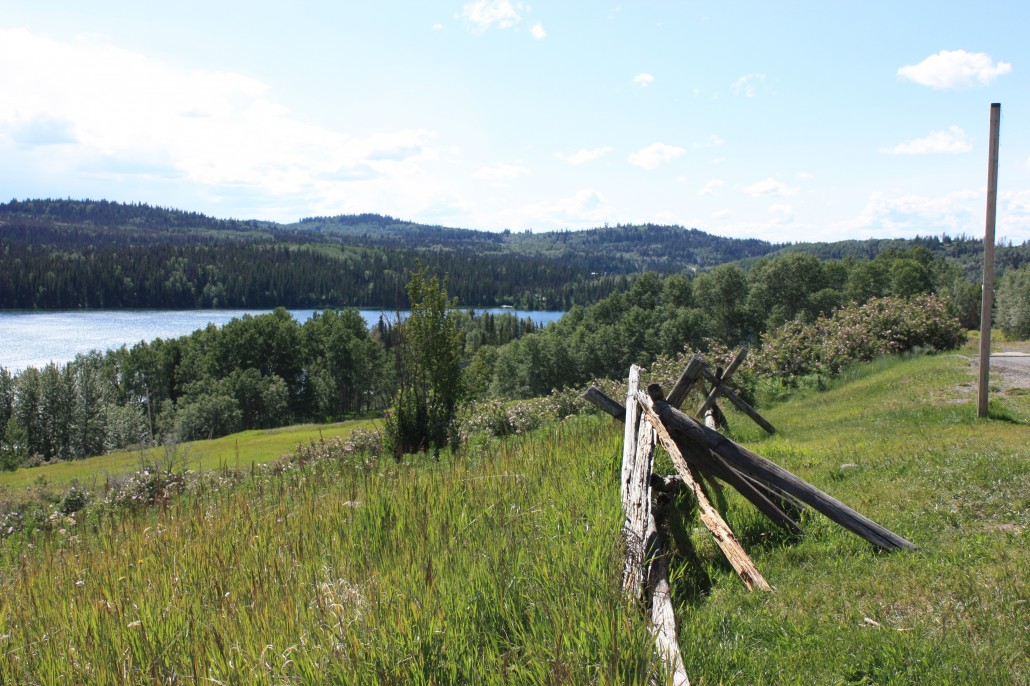 Lac Traverse, on the Thompson Plateau, was one of the lakes on the early brigade trail between Fort Alexandria and the Thompson’s River post at Kamloops.

Local historians are becoming very interested in the many brigade trails that wind their way through the British Columbia countryside, and groups are now working to preserve and develop the pieces of trail that still remain. There are six trails in all, and Alexander Caulfield Anderson rode over every single one of them during his years in New Caledonia. At times, he was the first gentleman to take the New Caledonia brigades out over a newly established trail.

Building a brigade trail through this heavily wooded and rocky country was not a simple task of finding a trail and cutting down a few trees to clear a path. Through experience good and bad, the Hudson’s Bay men had developed strict requirements for their brigade trails. These men looked for trails that hundreds of horses could safely pass over without injury, and a trail that might work for a Native man on foot would not work for the heavily loaded brigade horses. Sharp rocks on the trail-bed was only one of many hazards. If the ground was too soft, the passage of so many horses through a muddy stream-bed could turn the trail into a quagmire the animals could not easily cross. Safe fords over rivers and creeks were essential, especially as so much of the early summer travel was done in the season of high water. Gradient was important, but a steep slope might be overcome by switchbacks if the hillside allowed room. The horses needed food and water, and the trail-builders sowed alfalfa and white clover along the edges of the horse-road. Finally, on sharp corners where the pack animals liked to rub their loads, the men attached protruding triangles of wood that forced the animals to swing wide, thereby preventing damage to the packs they carried.

The oldest trail led from Fort Vancouver [Vancouver, WA], by boat up the Columbia River to Fort Okanogan, where the Okanagan River flowed south into the Columbia. North of Fort Okanogan, the brigade trail led up the east bank of the Okanagan River. Above its junction with the Similkameen river, the men of the brigade waded across the Okanagan River to its west bank at a place where an active native fishery flourished. The continued to follow the river through its open grasslands to pass west of Lake Osoyoos. According to the old maps, it passed west of the spectacular rock bluff south of Lake Vaseaux [Muddy Lake], passing through the area around White Lake, and joined Okanagan Lake where modern-day Summerland stands. When the brigades reached the western shoreline of Okanagan Lake, they entered a rocky terrain where many creeks tumbled across their trail. At the north end of the 70 mile lake they rode past Lac Ronde [Monte Lake] and climbed the ridge of land that separated the Okanagan watershed from the Thompson’s River. From the top of the hill, they followed Monte Creek to the South Thompson River, and followed that river west till they reached the Thompson’s River post at Kamloops. At that time, the post stood on the east bank of the North Thompson River at its junction with the South Thompson.

This brigade trail led up the rocky east bank of the North Thompson River and some portions of this trail were very rugged. The Traverse, where the men crossed their horses to its west bank, was forty miles north of the Thompson’s River post, where Little Fort now stands. Immediately west of Little Fort, the trail mounted the grass-starved Thompson Plateau (the Big Hill) and passed through the Grand Muskeg. From that swamp the trail travelled along the north shore of beautiful Lac des Roches, Lac Tranquil (Bridge Lake), and well to the north of Salt Lake (Sheridan Lake?). It then swung north to follow the north shore of Drowned Horse Lake (Horse Lake). West of Horse Lake the brigaders followed Bridge River west, and passed north of Lac en Long (Lac la Hache). They followed the San Jose River west, passing on the north side of Fish Lake (Williams Lake), before cutting north to reach the banks of the Fraser River at the Atnah Rapids (Soda Creek). From there they jogged around White Earth Lake (McLeese Lake) until they reached Fort Alexandria. From Fort Alexandria the men took canoes (before 1835) or boats (after 1836) north to Fort George (Prince George) and Fort St. James, Stuart’s Lake.

The third trail — the new trail from Kamloops to Fort Alexandria, 1843:

This newer road, first used in 1843, replaced the difficult trail over the Thompson Plateau, mentioned above. This new trail led along the north shore of Kamloops Lake to Copper Creek, up Copper Creek and Carabine Creek and over the hills to Criss Creek, down Criss Creek to Deadman’s River and up the east bank of the Deadman’s River past Mowich Lake. It followed Brigade Creek to Loon Lake’s north shore. From Loon Lake the trail followed a northwest loop to avoid a height of land, and swung around the south end of Green Lake. From Green Lake’s north shore it was a short distance to Drowned Horse Lake (Horse Lake) on the old brigade trail. There they followed the old brigade trail west and north to Fish Lake, and north to Fort Alexandria, on the Fraser River.

This trail is closely connected with A. C. Anderson’s 1847 expedition down and up the Fraser River. Anderson explored for this trail at the request of Peter Skene Ogden, who worried about the deep snow that might lie on the top of the Coquihalla Plateau he had walked across in 1846 — another difficulty for horses. Anderson approved this trail, and in 1848, the brigade traveled out by it. Their return journey was much more difficult. The brigades left Fort Langley and traveled north to Fort Yale in eight or nine boats. At Yale men and horses carried the loads across the Douglas portage, arriving at Simon’s House, a little house on the west bank of the Fraser near Spuzzum Creek. They ferried their loads and horses across the Fraser River at this point, then traveled north on the east bank to Kequeloose, the native village then in the area of the east end of the Alexandra Bridge north of Spuzzum. From Kequeloose the fur traders climbed the long hill to the top of the plateau of Lake Mountain, and descended the bluffs on its north side to Anderson River, at Boston Bar. They then followed Anderson River to Utzlius Creek, followed it on its northwest bank up the range of hills toward the Nicola Valley. At the height of land behind Boston Bar, the brigaders rode along to a pass where it was easier to cross than anywhere else. From this point they followed Spius Creek into the Coldwater River valley, and the Coldwater River itself all the way to the open grasslands of the Nicola Valley.  While it was anything but an easy hop over Lake Mountain and up the mountainside to Spius Creek, from the Nicola Valley it was a easy ride (on tired horses) through open grasslands to Kamloops.

The fifth trail, over the Coquihalla from Kamloops to Fort Hope:

This trail is closely connected to A. C. Anderson’s second 1846 exploration, when he walked the Coquihalla to Kamloops by the Tulameen River. From Kamloops, the New Caledonia brigaders crossed the hills to the Nicola Valley,  then waded across the Nicola River at the top end of the lake. Their trail continued southwest to the top of the hills by Quilchena Creek, then followed native trails that cut through open country to modern day Tulameen. The Coquihalla trail started at Tulameen more or less, and followed the narrow Soaqua (sometimes Manson) River valley to the top of the mountain. The first stopping place was on the plateau near Lodestone Mountain, twelve miles from Campement des Femmes (Tulameen). Another twelve miles brought them to a camp on a bend of the Tulameen River at Podunk Creek, and the next day they followed Podunk Creek west, making their way to Encampement du Chevreuill (Deer Camp), just below the summit on the Sowaqua Creek side of Manson Mountain. Nineteen miles further on, Manson Camp lay at the head of Peers Creek, and on the next day they rode down Peers Creek and the Coquihalla river valley into Fort Hope.

Heading west from Fort Colvile, this trail followed the Kettle River north from the Columbia all the way to its end at Rock Creek. It then mounted Anarchist Mountain, crossed Osoyoos Lake on one of its eskers, and then made its way over the hump of land into the Similkameen Valley. It followed that valley all the way west to the base of the Coquihalla, where it joined onto the trail that led them over the Coquihalla Mountain range to Fort Hope. Almost certainly, Blackeye’s son showed Anderson this trail, on his return journey to Fort Colvile in 1849. It continued to be traveled until 1852, when the Fort Colvile men brought their furs down to Fort Vancouver by boat. Sometime after that, they returned to the trail and continued to bring their goods in and out by Fort Langley, thus avoiding the heavy duties the American customs officers were by that time placing on their goods.

Many of these trails are open and hikable. You can follow the Okanagan trail around if you know where to drive, though parts of the trail over the Thompson plateau are lost — well, they are there if you know where to look for them. The Coquihalla trail has been protected by various groups in Hope and Princeton, under the umbrella of The Hope Mountain Centre, at http://hopemountain.org. You can hike this trail and many other local trails of interest, including some of Anderson’s explorations. This group has also opened up the Anderson River trail for hiking, though parts of it have been destroyed by logging and native trails are followed instead. The Kettle Valley trail is mostly buried by the road, which must follow it almost all the way — but in a way its protected too, because you can drive its entire length in safety.  The 1843 trail from Kamloops to Fort Alexandria is completely lost, though people who live in that part of the world know where bits of it are to be found. With luck, there are a few historical geographers searching for that trail, and it will be identified and protected.

There are a few more fur trade trails in British Columbia that I have found on A. C. Anderson’s maps and in his journals; they are not necessarily brigade trail, however. I will write about them soon, too.

8 thoughts on “The H.B.Co. brigade trails in British Columbia”