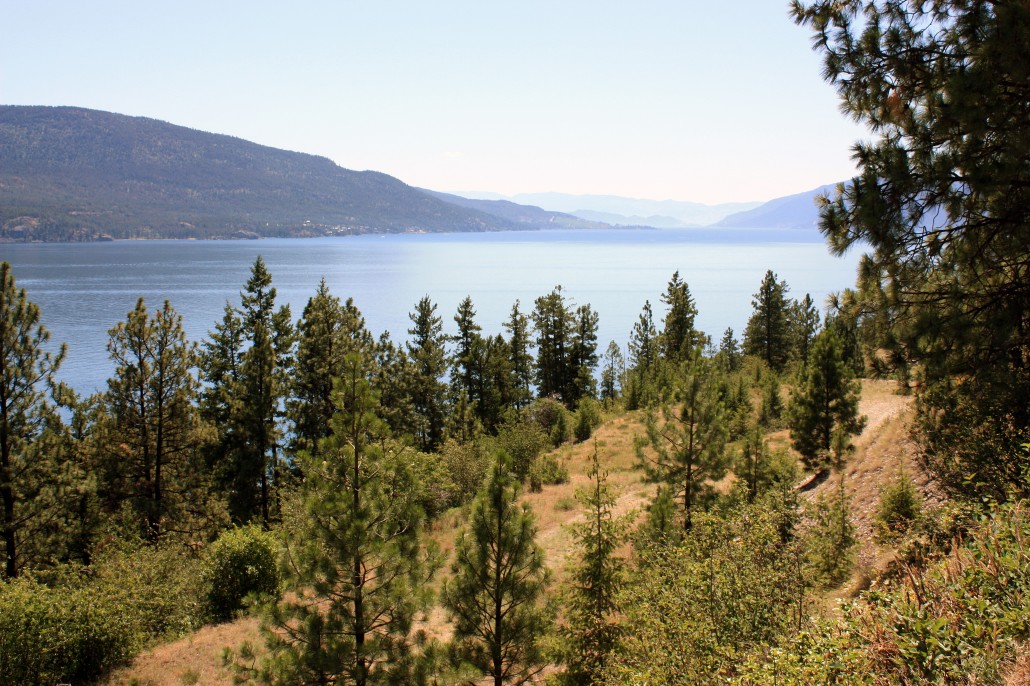 The brigade trails ran down the west side of Okanagan Lake, in the hills above the lake.

I am continuing the outgoing express journals on their way south from the Thompson River post at Kamloops, through the Okanagan to Okanogan House. You will notice the two different spellings for Okanagan/Okanogan. One is Canadian — as in the Okanagan Lakes region of British Columbia. The other spelling is American.

Following is William Connolly’s journal, beginning May 25, 1826. He had left Fort St. James on May 3rd, and so, at Kamloops, has been three weeks on the road.

“Although the Horses were crossed early in the Morning, yet before they were caught, tackled & loaded it was Eleven o’clock, & we therefore were not able to proceed farther than the Monte, where we encamped.” The Monte was where Monte Creek flowed into the South Thompson River east of the Thompson’s River post. “For want of Cords to tie them with, I had to leave about 1,100 Salmon, with a few Appichimons & Pack saddles at Kamloops , which were put in charge of an Indian called Nicholas (N’Kwala), who is said to be an honest fellow; & possessed of sufficient influence over his Tribe to secure them from being stolen. The weather was fair & warm.”

So, in the early years, the HBC men entirely abandoned the Kamloops post and everyone went out with the brigade to Fort Vancouver.

“26th Friday. At break of day Mr. Ermatinger with three Men set out for Okanogan. He expects to reach the small Lake [Osoyoos Lake] of that name on the third day, from whence he will forward an express to Mr. [John Warren] Dease [of Fort Colvile]. At the usual hour the Brigade moved off, and at nine the Horses were allowed to rest until two PM, when we resumed our Journey, and got to the furthest extremity of the Grande Prairie at Sun Set, where we Encamped. Weather the same as yesterday.”

Grande Prairie is the large flat land meadows that surround Falkland, B.C, north of Okanagan Lake. Both Edward and Francis Ermatinger were employed at Kamloops this year, so we don’t know which brother this refers to. Edward, however, took out the York Factory Express in 1827, and so it might be him.

“27th Saturday. Proceeded from four until eleven o’clock when we reached the Salmon River [south of Monte Lake, BC], when a heavy Shower of rain detained us for five hours. We then went on until Dark, when we Encamped at the Entrance of Okanagan Lake.

“28th Sunday. Set out as usual. Our route lay along the Okanagan Lake, which is rugged & fatiguing to the Horses. We reached Red Deers River at 11 o’clock AM, where we remained until 4 in the afternoon, from which hour until seven we proceeded on, & passed the Mauvais Rocher without accident — a little beyond which we put up for the night. We had several showers of rain, but none of sufficient consequence to arrest our progress, or injure the property.”

Red Deers (Biche) River flows into Okanagon Lake just south of Fintry. Mauvais Rocher, or “Bad Rocks,” was a place along the west shore of Okanagan Lake, south of Fintry but north of today’s Bear Creek Park. It always caused trouble for the horses. On my Lands and Forests Map, Mauvais Rocher is called Blue Grouse Mountain.

“29th Monday. Rainy weather, which retarded us much, but as it increased towards the afternoon we were obliged to Encamp at an earlier Hour than usual.

“30th Tuesday. At an early hour we moved off but stopped for some time at Jacques River [Trepanier/Jacques Creeks], where the Packs were examined from a suspicion of their having received some damage during the late rains. They were, however, all in excellent order. After this we pursued our route [through Peachland], and Encamped a few miles from the Prairie de Nicholas [Summerland]. Weather fine.

“June 1st, Thursday. On leaving the Encampment much delay occurred in passing through a Long Miry [boggy] Prairie [Vaseaux or “Muddy” Lake] in which the Horses sunk to their Bellies, and many of them could not be extricated without being unloaded. They were allowed to rest at the Little Okanagan [Osoyoos] Lake, from whence we proceeded in the afternoon to the Barriere, or entrance of Okanagan River, where we encamped after having crossed the Property & Horses to the opposite shore. The former was crossed over in Canoes, which a band of Indians we found here lent us for the purpose. These people also supplied us with some fresh Carp, & roots. I here found a note from Mr. Ermatinger informing me of his having arrived on the 28th Ulto, and that the next day he had dispatched an Indian overland with my letter to Mr. Dease. The weather continues fine.

“2nd, Friday. In counting over the Horses this morning it was discovered that four of the Colts were missing. [Etienne] Gregoire, the Horse Keeper, with an Indian, was sent in search of them. No danger either by accident, or otherwise, being to be apprehended between this & [Fort] Okanogan, I left the Brigade in charges of Messrs [James] Douglas and [Pierre Chrysologue] Pambrun, and with one man proceeded for that place where, after a pretty hard ride, I arrived at five o’clock PM. I here found Messrs [John] Work & Ermatinger, but not a word has been received from Mr. Dease, and I fear that some time will be lost in waiting for his people. The Boats, Three in number, are Pitched & ready to take in Cargoes, which is all that can at present be done. The weather continues fine.

“3rd Saturday. At Eight o’clock PM Messrs Douglas & Pambrun arrived with the Brigade. The property is all in excellent order, and the Horses, considering the length of the voyage most of them have performed, & the condition they were in when they left Alexandria, are as well as can possibly be expected.”

The horses must have been tired; they had come all the way from Fort Alexandria over the Thompson Plateau. In later years, the HBC men always changed their tired horses for fresh at Kamloops.

Three days later, on the 6th, “This evening Mr. Dease’s people arrived under the direction of Mr. [William] Kittson. They left Fort Colvile yesterday morning, which place the express forwarded on the 28th Ulto reached only a few minutes before their departure… The remainder of the day was occupied in appointing the people to the different Boats, and other necessary preparations for our departure from here tomorrow morning. The weather is fine & excessively warm.”

In 1831, Peter Warren Dease of Fort St. James brought out the New Caledonia brigades. He is brother to John Warren Dease, who is mentioned in the above journals. There were two trails down the Okanagan Valley: in 1826 Connolly went out by the lower muddy trail. By 1831, the HBC men have found a trail that is higher in the mountains, and less muddy. Here is Dease’s journal, beginning at Kamloops on May 16:

“Being rather late before the Kamloops horses were Crossed over, and the Indians settled, began our march at 11 AM & put up for the night at the River [Monte Creek] where we leave the South Branch of Thompson’s River to strike across for the Columbia. Here an Indian from the Upper Parts of the [South Thompson] River came with 17 MB value in furs which were traded by [Jean-Baptiste] Lolo. Fine day.

“Friday 27. The Weather very Warm. Put ashore at Salmon River East end of Grande Prairie. Afternoon passed the Strong Woods, recrossed the River and put up for the night at the beginning of the Hills. Had a Shower of Rain in the evening.

“Saturday 28. At the W. End of Okanagan Lake saw some Indians from whom a few furs were traded by Lolo. Put up for the night at Riviere la Biche where an Exchange was made with an Indian who Came to our Camp, gave him a young filly for a young horse. [Joseph] Brunelle, one of the men sick of a Swelling about the Groin, unable to do any duty.

“Monday 30. Rained most part of the night which retarded our Departure this morning, that the Water may fall from the trees. Two Packs got a little wet in fording the River this morning, but not to cause any damage. Put up for the night at Beaver River. Saw 3 Indians who have nothing. Brunnel getting worse, suffers much riding & Cannot Walk.

“Tuesday 31. Baited the Horses at Fourche du Chemin, and put up for the night at Riviere au The [Tea River, today’s Testalinden Creek].” Fourche du Chemin was at the forks of the two roads in the hills due west of Vaseaux Lake. “Louis Jeronquay getting better a little, begins to walk a little. Had a shower of rain in the Evening.

“June, Wednesday 1. Got to the narrows of Little Lake Okanagan [Osoyoos Lake] where we found Indians who lent us Canoes to Cross the Baggage, after which I traded one from them to send down [the Okanagan River with] Louis Jeronquay & Brunelle, being a safe navigation from this to the Establishment [Okanogan House]. Traded some Roots from a Party of Indians and put up for the night about three miles below the Forks of the Chemilcomeen [Similkameen] River. The Canoe came & Encamped with us.

“Thursday 2nd. The travelling from this to the Columbia being fine without any dangerous Places, with a view of having Every thing prepared at Okanogan for Embarkation, I left the Brigade in Charge of Gregoire and with Lolo proceeded to the Fort where I arrived at 2 PM and had the pleasure of finding Chief Trader [Sam] Black with Mr. [William] Kittson and the Brigade from Upper Posts [Kootenais, Flathead, and Colvile] all well and Everything safe. A Good supply of provisions has been sent down by Chief Trader [Francis] Heron from Colvile for New Caledonia District and also for the Snake Expedition. 9 Boats ready.

“Friday 3. The Brigade arrived safe to day at about midday. The Packs all safe and in good order & the horses in Excellent Condition considering the long voyage they have performed. The men were appointed to the different Boats and will have them gummed & loaded tomorrow.

“Saturday 4. The Boats were prepared, loading given out, and all loaded ready for an Early Start. Gregoire, with Lolo are appointed to take Care of the Horses… The State of the Water in the Columbia River is fine and we have every reason to hope for a Good passage hence to [Fort] Vancouver.”

The next leg of their journey south to their headquarters at Fort Vancouver [Vancouver, WA] will be their descent of the raging Columbia River. But the journey, though sometimes dangerous, was fast. This next section is now published, and can be found here: http://nancymargueriteanderson.com/brigade-seven/

Coming upriver was a much slower part of the overall journey from Fort St. James to Fort Vancouver and return. To read this series from its first post, go to http://nancymargueriteanderson.com/brigade-one/