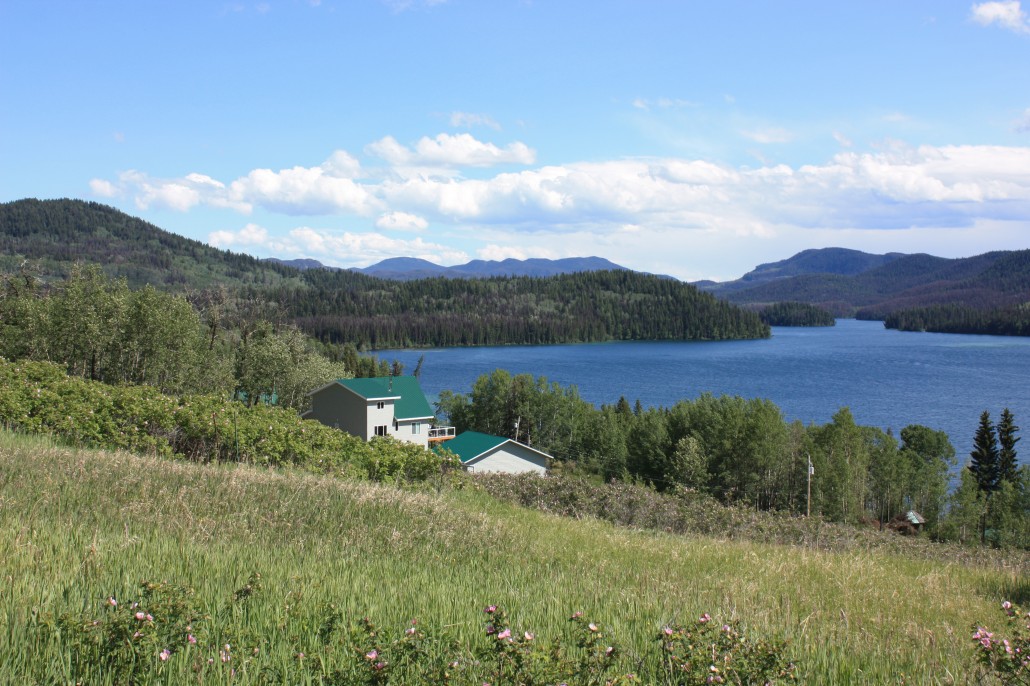 This is Lac de Roches, one of two beautiful and friendly looking lakes along the old Brigade trail over the Thompson plateau

As we begin this blogpost, the incoming brigades are camped on the banks of the North Thompson River, presumably near modern day Little Fort — although I am not sure both brigades crossed the river at the same place. Anyway, let us continue the journals from wherever the crossing place was:

William Connolly’s Journal of the Brigade from New Caledonia to Fort Vancouver and Return, 1826, B.188/a/8, HBCA

[August] 30th Wednesday. The road in the Mountain which we are now about to cross being very much obstructed with fallen trees, and many marshes which are almost impassible, Mr. [James] Douglas & six men proceeded ahead to clear away the former, & to throw bridges over the latter to prevent the horses from sinking. About three hours after the brigade moved off, and at five o’clock PM reached the swamp, the only spot in this mountain which furnishes any stand of subsistence for Horses, and where of course we encamped. The road we have passed through, tho’ naturally bad, is susceptible of much improvement, which however can never be affected by a passing brigade. Weather fine & cool, distance today about 24 miles.

In his book, The Lifeline of the Oregon Country: the Fraser-Columbia Brigade System, 1811-1847, James Gibson suggests that the Grand Muskeg [Large Swamp] might have been at the south end of Phinetta Lake, at the foot of the Mountain [Thompson Plateau]. However, according to this journal, there appears to be more than one bog — Connolly notes that there are “many marshes.” The bogs were a problem for the horses. As some of you know, this section of the old brigade trail was not used after 1842, but was replaced by another trail which cut off at Kamloops and re-joined the old trail at Bridge Creek.

31st Thursday. Mr. Douglas & party set out again early in the morning for the same purpose as yesterday, the remainder of the Mountain being equally in want of repairs as the part we have already passed. At Nine AM The Brigade moved forward, and reached a fine Plain at the west end of the Mountain at two o’clock PM, where we Encamped for the Night; None of the Horses appear at all exhausted, and there can now be little doubt of our reaching the end of our Journey in perfect safety. We have now got into quite a different climate from the other side of the Mountain, the nights are frosty and the days cool & pleasant, and vegetation being still in full vigour, affords the Horses a luxurious abundance.

September 1st, Friday. The Horses having strayed during the night to a considerable distance, the Sun was up before they were collected and loaded. We then moved on through a rugged country to the western extremity of Lac du Rocher [Lac de Roches], where we baited the Horses. We then went on and reached Lac Tranquile [probably Bridge Lake] at six o’clock PM, where we Encamped. It was here Observed that the light, or extra Horse, belonging to Plesses and Thomas’ Brigades was missing. The former was therefore sent in search of him. In the morning muster, he [the horse] was amongst the rest but it is suspected that he Skulked off before the Brigade started; and he must be at our last Encampment. The weather Continues beautiful, and food for the Horses abundant, and of an excellent quality. Distance about 28 miles.

I love the image of a horse skulking off…

2nd Saturday. Plesses overtook us this morning but without the Horse; and in conformity to what was all along held out to them, that their own Horses would be taken to replace any that should be lost by negligence, Plesses’ Horse was in consequence added to the Brigade…

In his book, Lives Lived West of the Divide, Bruce Watson has no information on Plesses. It may be a dit name and he is somewhere else in the book, or it may be there is no record of him in the HBC records. Nor does Bruce Watson know who Thomas is: there are certainly men with the surname “Thomas” in his book, but none appear to be in New Caledonia in these years. Interesting, one of the men who carried the name of Thomas was Polynesian — not Kanaka [Hawaiian], but Polynesian.

Our route this Morning was much obstructed by fallen Trees, but in the afternoon’s march we found the roads excellent and reached the drowned Horse Lake at six o’clock PM where we Encamp. Fine weather continues, distance about 27 miles.

This is modern-day Horse Lake, and according to Sam Black’s map [CM/B2079, BCA] the trail passes over the north side of the Lake, which he calls “Lac Chevaux Noye” — Drowned Horse Lake. [His writing is small and cramped, and I cannot tell you how he spelled the word Chevaux]. Black drew his map in about 1839, and so the lake maintained its name for a decade and a half at least. On his 1867 map of British Columbia, Anderson spelled it Cheveaux, but said that the drowned horse incident happened in 1827. As Connolly calls the lake “Drowned Horse Lake” in summer of 1826, this incident must have happened before 1827!

Peter Warren Dease also wrote about the drowned horses in his 1831 journal. He said: “Proceeded & Encamped along Lac des Chevaux which is so named from the Circumstance of 18 horses having perished in it by breaking through the ice some years ago..” So we know what happened, but we don’t know when it happened. If a historian is serious about discovering when this occurred, it might be mentioned in the Fort Alexandria journals, though I cannot guarantee that all years are represented in the collection which is in the Hudson’s Bay Company archives.

Anyway, let us continue this post with Peter Warren Dease’s journal of the Brigade from New Caledonia to Fort Vancouver and Return, 1831, B.188/a/17, HBCA:

11. Stopped at Rocky Lake [Lac de Roches] and put up at Lac Tranquil [Bridge Lake?]. Had a shower of rain in the Evening.

12. Put ashore to bait at Riviere la fourche [fork], but a heavy Shower of Rain obliged us to stop all day.

I am taking a guess this brigade passed by Drowned Horse Lake and is in the immediate area of modern-day town of 100 Mile House. It is likely they are camped on Bridge Creek near its junction with the creek that flows out of Holden Lake. They will continue on the next day and reach Fort Alexandria quite quickly: often at this stage the gentlemen rode ahead and left the horses in the hands of the voyageurs, under a single clerk. Nothing much would happened here: the hardest part of the horse journey is finished and they can relax for a while. But their boat journey up the Fraser River to Fort St. James still faces them, and that is not an easy journey to make.

If you want to go back to the beginning of this series, go to http://nancymargueriteanderson.com/brigade-one/

When the next section of this journal is posted, it will appear here: http://nancymargueriteanderson.com/brigade-eighteen/

4 thoughts on “The New Caledonia Brigades climb the Mountain”