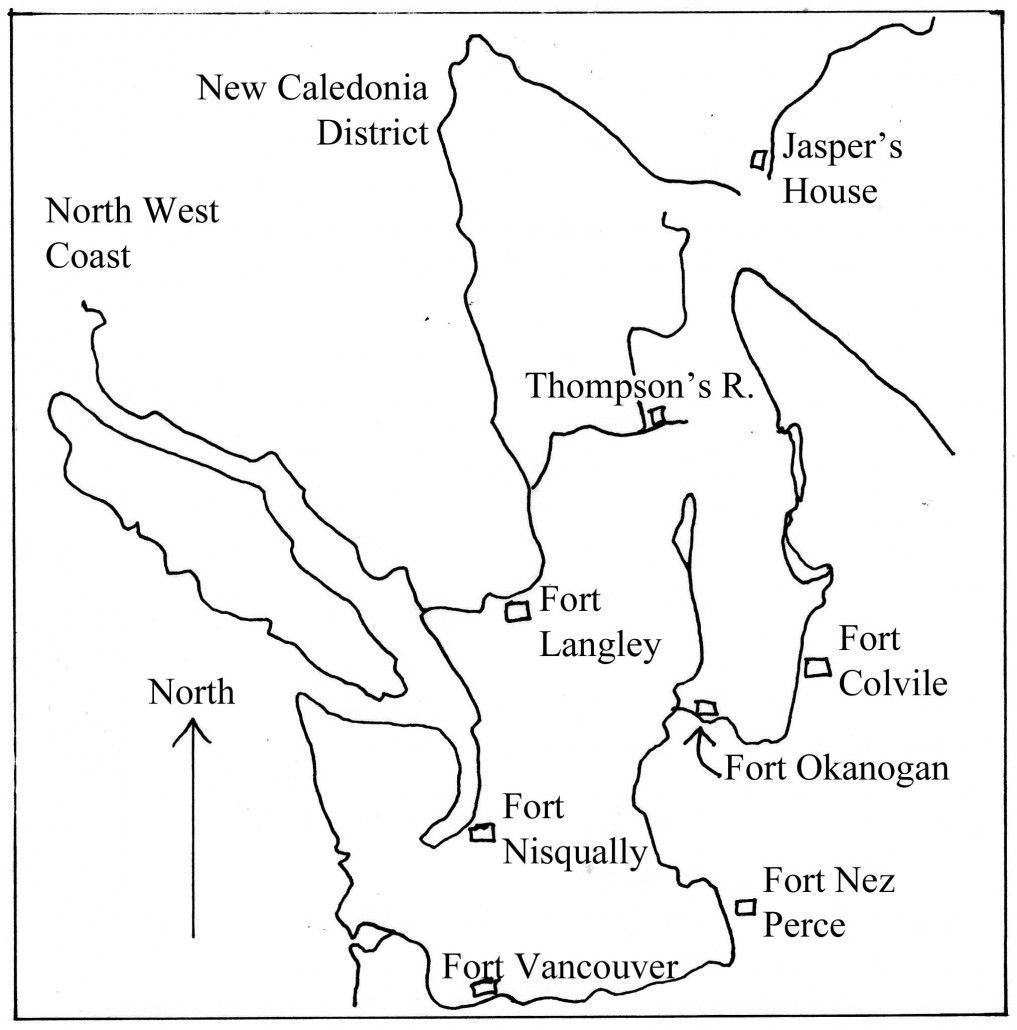 At Fort Okanogan, the brigades prepared to descend the Columbia River to Fort Nez Perces [Walla Walla] and Fort Vancouver, their headquarters a hundred miles inland from the mouth of the Columbia River. There are some fabulous rapids along this route, and I will try to include descriptions of them as I bring the voyageurs through.

First we have a continuation of Chief Factor William Connolly’s journal of 1826, and we will begin immediately with: “[June] 7th, Wednesday. This Morning the Brigade, consisting of Six Boats manned with seven men each, & loads of 35 Pieces left Okanogan for Fort Vancouver, under the Guidance of an experienced man, Pierre L’Etang.

Pierre L’Etang was a Canadien who joined the NWC and was on the Pacific slopes by 1818. He was employed at Fort Nez Perces in the 1820’s, and so came north to guide the brigades downriver to Fort Vancouver. In 1826, and perhaps earlier, he acted as guide for botanist David Douglas in the territory. In 1830, he and other trappers in the Snake District were attacked by Blackfeet, and L’Etang was shot in the neck and killed.

“The passengers are, besides myself, Messrs. [John] Work, [James] Douglas, [Pierre Chrysologue] Pambrun, and [William] Kittson. The last proceeds only to Walla Walla where he is to pass the summer with Mr. [Samuel] Black. The day was fine, & the strength of the Current being proportionate to the usual height of the waters, we went on with much rapidity until seven o’clock PM, when it was necessary to Encamp in order to Pitch some of the Boats that are very leaky. From some Indians we saw, a few Salmon were procured of an excellent quality.

“8th, Thursday. At three AM we were on the water and at nine reached the lower part of the Priests Rapids, where we breakfasted upon Salmon we obtained from the Indians who inhabit that place. Re-embarked at ten, and arrived at Walla Walla at eight o’clock PM, where we found Mr. Black & people all well. It being impossible to complete the necessary arrangements this night, connected with our departure from hence, they were therefore deferred till next day. We are here to add two Boats to the Brigade, to man which we will have to reduce the crews of the whole to Six Men, as Mr. Black cannot furnish a sufficient number of hands for these two Boats. They are to Convey the returns of this place, and a quantity of Gum required for the use of Fort Vancouver. The latter part of the day was rainy, which being accompanied by a strong head wind, impeded our progress much.

“9th, Friday. Early in the morning the Men began to put the two Boats we take here in order, which was not effected until 11 o’clock, when the ladings were given out & we immediately after pursued our voyage to Fort Vancouver. Having mentioned to Mr. Black our necessities in regard to Horses, he informed me that the number we required he thought could be obtained without being under the Necessity of visiting the Nez Perces camps, which are at a considerable distance up Lewes’s [Snake] River — and a voyage to which, & time taken up in Trading, could not occupy less than fifteen or eighteen days.”

In later years, the Gentlemen of the New Caledonia brigades purchased their new brigade horses on their return journey from Fort Vancouver to Fort Nez Perces [Walla Walla]. At the Nez Perces trading ground they would trade blankets for as many horses as they needed, and drive them to Fort Okanogan via the trail that led through the Grand Coulee. The stallions were neutered at Okanogan, and all the horses were loaded and driven north as far as Fort Alexandria. They were later known as Palouse horses — hence, Appaloosa. However, not all the horses the HBC Traders purchased from the Palouse, Nez Perces, and Cayuse Natives were Appaloosa. These Native tribes also bred and traded roans, sorrels, and bays. If you want more information on these horses, you can read this article: http://www.thefurtrapper.com/indian_horse.htm

It may also be of interest to you, as it is to me, that the blood of the now-rare Canadien horse is found among these horses. If you have information on the Canadien horse, there are a number of people I am in contact with that want to know more. Please get in touch.

We will find out what these Gentlemen did for brigade horses when the incoming brigades make their way upriver again.

Let us continue with the story of the outgoing brigades, on their journey between Okanogan and Fort Nez Perces [Walla Walla]. This next comes from the brigade journals of Peter Warren Dease who led the New Caledonia brigades out in 1831.

“Sunday 5th [June]. This morning at sunrise the Brigade consisting of 9 Boats loaded with [blank] Pieces each, passengers Messrs. [Sam] Black, [William] Kitson [sic] & Self pushed off from Okanagan & put up for the night above Priests Rapid.

“Monday 6th. Arrived at Walla Walla afternoon, left the Provisions required for the Snake Expedition Party. Chief Trader Simon McGillivray being in a bad state of health & wishing for Medical Assistance requested to get a passage to Vancouver. Mr. Kitson has therefore been appointed to take the Charge during his absence and being Experienced at this Place will not be at any loss to manage its affairs.

“Tuesday 7th. Embarked the Returns of the Post and gave passage to two freemen to go down to Vancouver. Left the fort at 2PM….”

Although these fur traders did not mention any rapids other than Priests Rapids, there were a number along this stretch of river. Coming downriver, however, they were for the most part easy to traverse. It was as they worked their upriver on their return journey, that the rapids gave a little trouble.

Priests Rapids follows. According to Gabriel Franchere, Priests Rapid was named by John Stuart who, in 1811, saw a Native man performing ceremonies which appeared to imitate Catholic ceremonies. In 1826, Simpson noted that “At 11 we commenced our run of the Priests Rapids, so called by the Canadian Voyageurs from the circumstance of an old Indian who constantly visits the Boats, when passing these rapids, who they think resembles one of that Holy order. Below the Rapids the Banks of the River becomes densely lined with Indians… They constantly importune us for Tobacco, of which they frequently get a Small donation.”

There were other rapids along of the river, but they remained unmentioned in the brigade journals, and in those of the York Factory Express as well. But the Marle Banks was often mentioned. “Marl” was a rich earth of clay mixed with remnants of sea-shells that the Canadiens called les Terres Jaunes, and the clay cliffs of the Marle Banks stood on their left hand side as they came downriver. Today they are the White Bluffs along Hanford Reach.

If you want to read this series of posts from its beginning, go to http://nancymargueriteanderson.com/brigade-one/

The next section of these journals is here: http://nancymargueriteanderson.com/brigade-eight/