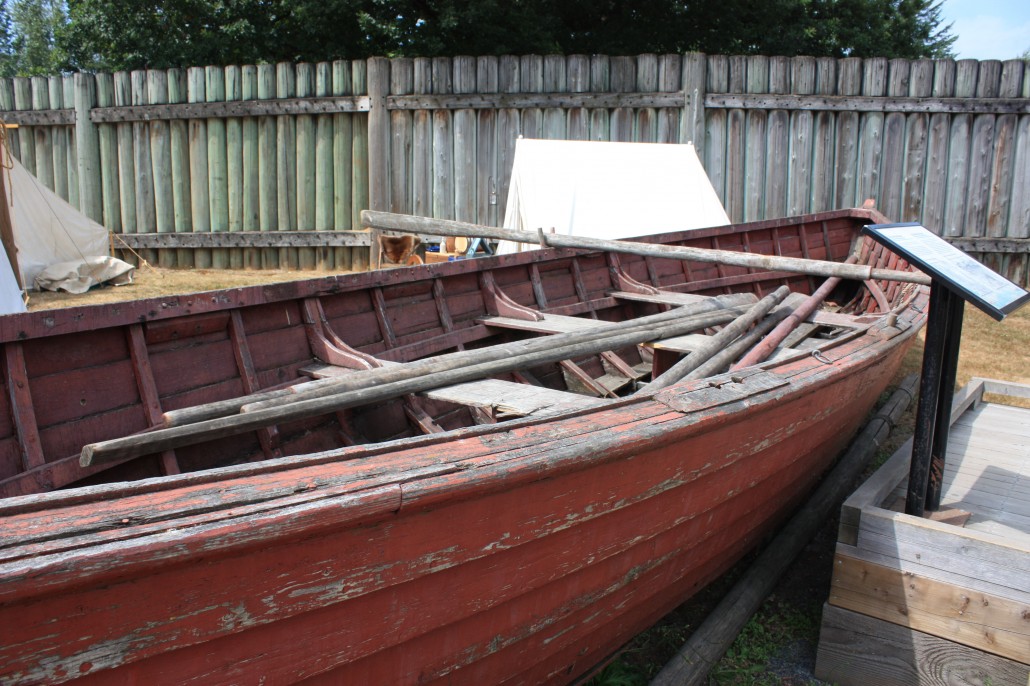 Boats similar to this Fort Langley, Fraser River, clinker built boat were used all through the fur trade both east and west of the Rocky Mountains — but  in the west not before 1835. In 1826 these HBC men were still traveling in canoes.

The New Caledonia brigades started their journey at Fort St. James, and so have to make their way north, from Fort Alexandria, to that place. They turn their horses loose on the grasslands outside the fort, and prepare their boats for the journey up the Fraser River to Fort George and Fort St. James.

In these years the HBC men still traveled in birch bark canoes, which caused some problems for them. In 1831, Peter Warren Dease complained that “Want of Bark for the Canoes is a great obstacle to us at the present moment, for which the Worst of the canoes could not be done with today, and but 2 men capable of doing that work properly.” Good birch bark was scarce on the west side of the Rocky Mountains, and a birch tree, once harvested, could not be harvested again for another decade. In addition to this, the birch trees that grew in New Caledonia were much smaller than those in the east. The difficulties of repairing the canoes delayed his men for five days, but they finally loaded their fragile craft and headed north. As you will see, they broke three canoes on their way upriver, and one became so unmanageable in the Big Rapid they abandoned it.

Dease left New Caledonia in 1835. When Peter Skene Ogden took over the territory, he replaced the birch bark canoes with bateaux. Thee boats were relatively flat-bottomed and carried a heavier load than the Columbia boats (the boats they had used between Fort Okanogan and Fort Vancouver). The boats Ogden had built were heavier boats altogether, and could not easily be portaged. The largest were thirty feet long, seven feet wide, and two and a half feet deep. Like the York Boats, used east of the Rocky Mountains, their keel was laid first, and the “varangues,” or ribs, bent with the use of a steam box before being attached to the keel. When all was ready, the boat was turned and the sawn planks bent around the ribs and nailed into place. Finally, the bateaux was caulked and sealed with oakum [old rope] and pitch. These clinker-built boats were strongly built, and much more able than canoes to handle the rough waters of the Fraser River.

However, we are not at that point yet. The New Caledonia men are still using birch bark canoes. So, from William Connolly’s Journal of the Brigade from New Caledonia to Fort Vancouver and Return, we have this:

8th, Friday [September]. The Goods were unpacked, and what is requisite to form the outfit of the post was laid aside. In addition to the usual supplies, a sufficiency is also left for the Chilcotin Trade, in case an opportunity should occur of renewing our intercourse with them…

There was a war between the Secwepemc and the Chilcotins [T’silhquot’in], which caused some distress at Fort Alexandria over the summer and kept many of the Dakelh away from the post. Connolly spent several days negotiating with the various tribes to settle this argument, and finally left the post on the 10th of the month. But it is interesting to note that Connolly half expected Governor George Simpson to arrive at Fort St. James this year (1826). We know from the “Two Canoes” thread that he came into the territory, but in 1828 — two years later.

10th Sunday [September]. In the Morning we departed from Alexandria to proceed up the River to Stuart’s Lake. The Brigade consists of four Canoes, three of which are loaded with each 28 pieces and manned by five men, and mine with Mr. [James] Douglas who embarks with me, has 18 pieces and six men. I was under the necessity of leaving 12 pieces of sundry property (none of it however essential to complete the Fall Outfits), which could not be embarked without overloading the Canoes and endangering their safety in the rapids. These goods shall be sent for before the closure of the Navigation, if possible. We are provided with provisions for ten days, and expect to procure a sufficiency for the Completion of our voyage along the way. After an extraordinary series of fine weather we have had I fear we will experienced a proportional duration of bad. At 7pm we encamped at Sto-ni-ya [Stonia Lake, in A.C.’s time].

11th Monday. At Break of day we embarked, and in the course of it passed two small parties of Indians we appeared to be not sufficiently apprehensive of the Chilcotins to induce them to quit the banks of the River. They are occupied Fishing, & are pretty successful. From them we procured a few fresh Salmon. Encamped at Quesnel’s River. Cloudy weather.

12th Tuesday. Early in the night it commenced raining which continued by intervals throughout the day. In passing at the Rascal’s Village we saw only a couple of Indians. They confirm the reports that the numerous body of Indians who usually inhabit this place had retreated from the Banks of the River towards Bear Lake, and the sources of Quesnel’s River, but whether they have done anything in the Fur way is not known. To both these places Salmon ascend, and they will, I hope, be able to provide the means of subsistence for the ensuing Winter. Encamped at the foot of the Rapid above Riviere au Liard [Cottonwood River].

13th Wednesday. Embarked at an early hour. Rain again best part of the day. Reached the head of the Rapid [Cottonwood Canyon] at 9 o’clock am, having carried part of the Cargoes over. The Current is extremely strong, & our progress proportionately slow. Encamped at the West Road River.

14th Thursday. Rained heavily all day. It did not, however, prevent us from proceeding. At nine am we came up with a band of Indians, whom we found employed in curing salmon, of which they already have a considerable quantity. These people, altho’ too distant from the Scene of Action to be under any apprehension from the Chilcotins, are nevertheless too much in dread of those people to venture to visit Alexandria, to which place they belong. I therefore promised them in conformity with the plan laid down, that the people of that establishment should bring them their usual supplies either late this Fall, or in the Commencement of the Winter. Thee people have a few skins, and promise to endeavour to make up their usual Hunts. At two pm we came up with old Chilquettes Band, when after remaining about an hour, we went on to a third where we Encamped. These like the first are all occupied curing Salmon, & have also a few skins. The latter they offered to give me, but as they have all debts at Alexandria, to avoid any confusion in their accounts, I left them their furs to be delivered to the people of that post when they come up with their supplies. Of Salmon I procured a sufficiency, which without any other help would serve the Brigade to Stuart’s Lake, by the means of which and some given gratis, they were all supplied with Ammunition for their Fall Hunts, on which they are to go as soon as the Salmon Fishing ceases.

15th Friday. At Break of day we Embarked, found the Current exceedingly strong, the river in this part being confined within a very narrow channel. Reached the Stony Islands at too late an hour to attempt ascending the Rapid, we therefor camped below it. Cloudy weather, but no rain.

16th Saturday. Passed the Rapids [Grand Rapids] without accident tho’ one of the Canoes occasioned us some loss of time by having taken a wrong channel.

In the evening we met Ho del to, the Chief of the West Road River, who was on his return from Bear Lake where he had made his Hunt, in which however he was not very successful, from the extraordinary height of the waters during the spring months (An Evil of which every Indian I have hitherto seen has complained). He informed that the Natives who are about Bears Lake have not been altogether idle — that most of them have Furs, and that they all intend to make Fall Hunts. If their reports are correct, I have less reason to despair of Alexandria than I at first suspected. I will endeavour to inform them of our intentions of visiting them early in the winter. It is important that they should be acquainted with this, as they would otherwise perhaps feel a disinclination to work, from the small hope they would have of receiving any supplies.

From this Indian I learn that the people, as was directed in the spring, are on their way up to the sources of the east branch of this River to fetch the Leather which is to be furnished by the Saskatchewan people. [It is 1826, they will meet James McDougall who is bringing in the incoming Columbia express by the Tete Jaune Pass for the first time]. They slept last night at the Forks [Fraser-Nechako], and departed from Hodelto this morning. Waccan [Jean-Baptiste Boucher] is one of the party, having been, as I am informed in a letter from Mr. [George] McDougall, of the 11th inst., sent to procure a Guide in place of that old Rogue Tete Jaune, who has deceived us. [So in 1826, freeman Tete Jaune was in the employ of the HBC as a guide]. I also received letter from Messrs. [Charles George] Ross & [Archibald] McDonald of the 5th & 7th instant, which contain nothing of an agreeable nature. [We know that Archibald McDonald was in New Caledonia for a year, and here he is!] The returns have failed throughout the Department, owing, it appears, to the uncommon height of the waters during the most favorable period for hunting Beaver… To Hodelto I gave a shirt & some Ammunition, and he is to proceed immediately to his old Hunting grounds about the Salmon River, together with his band, where he expects to make well out. These Indians are all supplied with the means of Hunting until such time as we can again replenish their stock. In the evening we came up with odl Chu-tiass & his small party who also gave us Salmon. The old fellow had eleven skins, and being their only furs, I advanced him a Blanket of 3 pts upon which he now owes five Beaver. We proceeded a little farther when we Encamped about two miles below the forks. The weather was fine, the first entire fair day we have had since leaving Alexandria.

As we know from the outcoming journal, Fort George, the post that stood at the forks of the Nechako and the Fraser Rivers, is closed down. When these men begin their journey again, they will paddle up the Nechako River toward Fort St. James, on their way home.

Let us see what has happened in Peter Warren Dease’s Journal of the Brigade from New Caledonia to Fort Vancouver and Reurn, 1831. I think I will leave this until the next blogpost, and write this section in two sections, instead of the normal one. So, next week…

To go back to the beginning of this series, go here: http://nancymargueriteanderson.com/brigade-one/

When the next section is posted, it will appear here: http://nancymargueriteanderson.com/brigade-twenty/