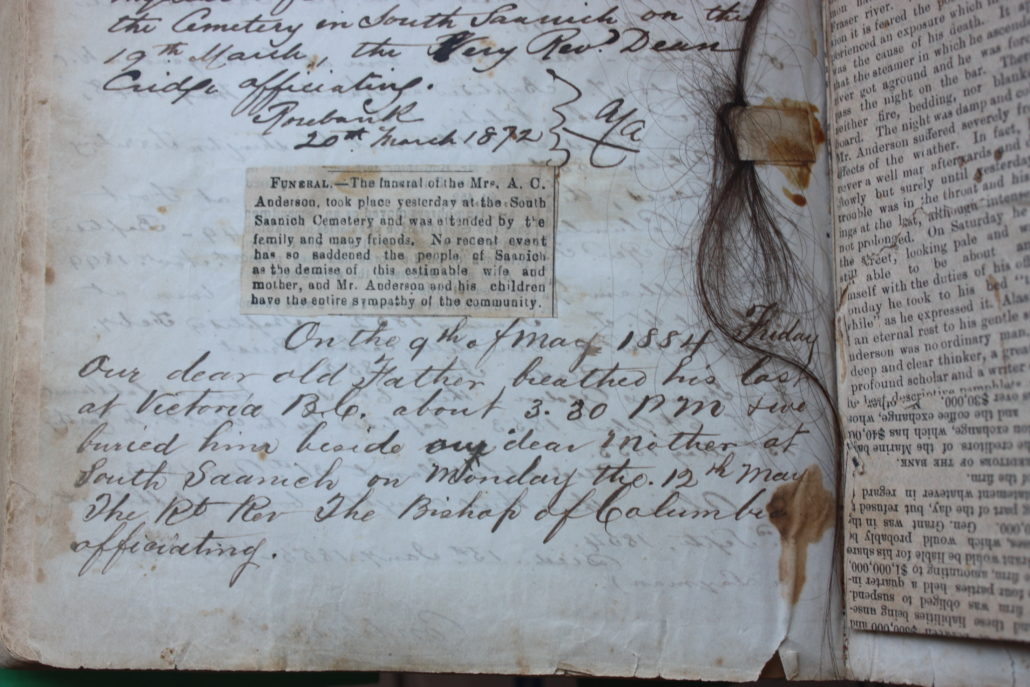 This is Alexander Caulfield Anderson’s family Bible, with image of my great-grandmother Betsy Birnie’s hair.

Many are the historical artifacts that can be found among descendants of Hudson’s Bay Company employees, but for James Birnie and Alexander Caulfield Anderson descendants, our ancestors’s fur trade artifacts are preserved in various archives in the Pacific northwest — that is, Oregon Historical Society Museum and Archives in Portland, OR; Wahkiakum Museum in Cathlamet, WA; and the Royal British Columbia Museum and Archives in Victoria, B.C.

Some of these items might not be recognizable as “artifacts.” For example, a descendant of a fur trader who worked in the Columbia District in the 1840s discovered that one of the objects in his possession, which had been passed down through the family, was a “cassette.” Everyone who travelled in the fur trade had a cassette, or wooden box in which they packed their possessions to keep them safe along the road. When he travelled west with the incoming Columbia express, Aemilius Simpson had his books and instruments packed in Cassettes — wooden boxes built in the fur trade posts that were especially designed to keep possessions safe. (In spite of this precaution, however, his Mountain Barometer was broken). According to the editor of the book, “Peace River: A Canoe Voyage from Hudson Bay to the Pacific,” [see the “Two Canoes” thread on this site], a Cassette is a trunk “made out of well-seasoned pine, as strong and light as dovetailing, grooving, iron binding, and good workmanship can make them. The stuff throughout is three quarters of an inch thick. The dimensions are two feet four inches in length, and one foot four inches in width and depth, and beveled on top to the extent of nearly an inch, leaving the sides about fifteen inches and a quarter deep, of this depth, the cover [made to fit closely to a lap in the body of the box] takes from four to three and a quarter inches. Of the “Cassettes” used in the country, this is the largest size, and the smallest does not vary more than an inch in any way. They are well painted, and are proof against any accident but fire.”

Many people who own these Cassettes might not recognize them for what they are. In this descendant’s case, it was called a “Grub Box,” and used for camping and hunting expeditions into the wilderness for years. If you want to see an image of a Cassette, find the August-September 2015 issue of Canada’s History Magazine (it used to be The Beaver, if you remember). A.C. Anderson owned one, as did James Birnie — but they have not survived to reach any museum so far as I know.

But other objects of value have. The Wahkiakum Museum, in Cathlamet, WA, has many Birnie objects — for example: corkscrews used by the Birnie family members; a broach given to Charlot Birnie by her son-in-law Thomas Lowe; a silver spoon given to Birnie by members of the United States Exploring Expedition after one of their ships wrecked at the mouth of the Columbia River; and a sugar bowl. A plain old sugar bowl. Other Birnie objects are in a privately owned collection in Cathlamet and Vancouver, WA., and include fine furniture which they owned in later years; the lock of Birnie’s store which he brought from Fort George [Astoria] when he retired from the trade; quilts, chairs, and other objects of interest and value. The collection of items here clearly shows that James Birnie made money after he left the fur trade, and that the Birnie’s lived quite comfortably in their home.

One more item that is preserved in this Museum is James Birnie’s family Bible, and that is how we know that A.C. Anderson’s wife’s name was Betsy, and not Eliza, as Anderson wanted her to be called.

According to the book Cathlamet on the Columbia, written by Thomas Nelson Strong and published in 1930 in Portland, OR…

Mrs. Birnie’s canoe was one of the wonders of the lower river. No larger one in the memory of Indians had ever been seen there. It was said that it could carry seventy people. In the fall of the year this canoe, manned by twenty or thirty Indian men and women, with all their belongings and household furniture aboard, would start seaward from Cathlamet. Mrs. Birnie, all fire and energy, would be in command, and no woman on the river could command better. To the dip of paddles and the Indian chant, the big canoe, enforcing respect everywhere, would pass the Chinook village into Chinook River to the portage. Here the expedition would be taken over to the Nasel River and from there would pass into Shoalwater Bay. After a few weeks of hunting and fishing the part, with its spoils, would return by the same route.

Interesting story? There is a large canoe in the basement of the Oregon Historical Society Museum and Archives, and it is considered by some to be Charlot Birnie’s canoe. (I don’t think anyone knows for sure). However, James Birnie’s medical bag IS in the Museum, and there may be other objects of interest as well stored there. By the way, medical bags are also one thing that many of the HBC gentlemen might have possessed, and passed on to their children.

Now, for the Royal British Columbia Museum and Archives. Alexander Caulfield Anderson’s son, James Robert Anderson, was in at the very beginnings of the establishment of the Legislative Library, which eventually became the Museum and Archives. He deposited many of Anderson’s possessions in the then library. These items included: two compasses; a telescope; flint and steel; and “the bowl of a Meershaum pipe which had been given by Captain [John] Palliser to Mr. A. C. Anderson,” when Palliser was at Fort Victoria. (Item 964.3717.1). There is also a “pouch made from an eagle’s claw containing the first set of chess men made in the territory now known as British Columbia by your father, Mr. A.C. Anderson.” (Item 969.18.6). The Museum says the eagle’s claw bag is pig-skin, and I think it is likely made from the skins of the pigs that Anderson had butchered at Fort Alexandria in the 1840s — see: http://nancymargueriteanderson.com/brigade-provisions/

There are other items also found in the Museum. His Latin Bible is there, with its leather pouch (Item 973.177.1). He purchased it at Fort Vancouver in 1840, and carried it with him everywhere — as is clearly illustrated by the fact that as he passed through the grove of California Rhododendron at Rhododendron Flats, Manning Park, in 1846, he picked a blossom and placed it in the centre of this Bible. It is still there. See page 99 of my book, The Pathfinder.

I don’t remember that the modern Museum Collections manager found the compasses that are supposed to be in there, but they do have two telescopes, and either one could be his. They’re actually on display in the Museum, or at least were when I was there.

There are other items stored there. One of them I remember being a purse that Anderson would have carried with him — a flat leather (probably rawhide) pouch that had Cree beading on it, I believe. However I do not seem to have a photograph of it, although I know I took one — but that was many years ago and things do get lost and forgotten, unfortunately.

But here’s the important thing. I might have mislaid or lost the photo of one or two items that I saw in the 1990s in the Museum — but they are not lost. I can make an appointment with these busy Collections managers, and get another photograph of it. If, however, these items had been left in the care of my own family, they would not have survived the years. I know this because my mother owned some of the Elton [of Clevedon Court] family silver — her grandmother’s — which was certainly badly damaged while it was in her possession.

But some artifacts were preserved in my family. My mother’s cousin, H.H.C. “Torchy” Anderson, knew James Robert Anderson, and as James had no children, he bequeathed some items of value to Torchy. These included A.C. Anderson’s Family Bible, which was passed down by Torchy to one of my uncles, and then passed down to me. A strand of Betsy Anderson’s hair is pasted in the Bible, and so I can actually touch something that belonged to her — an amazing feeling. [A picture of this is also in The Pathfinder, on page 192.] I also have a copy of James Robert Anderson’s Memoirs, with Torchy’s initials at the front — I think the B.C. Archives thinks they own the only two copies (in Mss. 1912), and it may surprise them to find that is not true.

I have a number of little items that came down to me from someone, either Torchy or Elton or my uncle Harry. The provenance is lost, but they are definitely Anderson items: who created them, I do not know. One is a little pharmaceutical box address to “Mr. Anderson” by Dr. J.H. Moore in 1954, and it contains four chessmen carved out of some kind of rough stone, I think. I don’t know which Mr. Anderson this might refer to, but I think it’s probably Torchy, as in 1954 he might have worked for the Victoria newspaper — yes, this is Torchy Anderson, the newspaperman of some note in Victoria, Vancouver, and Ottawa!

The second item I have is a wooden box with a lid that slides open, and it is filled with chessmen. I am not aware that my uncle Elton ever played chess, so this might also be from Torchy, or from A.C. Anderson’s son James. Or from Anderson himself. He is the only man in the family that I know played chess, and I only know that because of the chessmen that are stored in the Royal B.C. Museum.

So, if you are descended from an HBC fur trader, look at the things that you inherited with attention. They might be more important to history than you think they are!